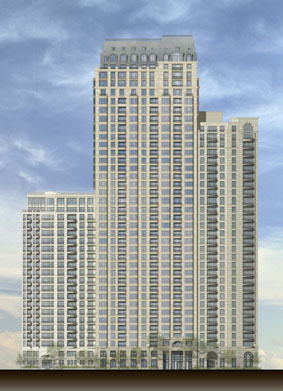 Plans call for 312 high-rise units with unobstructed views of Lincoln Park, North Pond, Lake Michigan and the city skyline. There will also be 13 townhomes, located along St James Place and Deming Place. We are under the impression that it will be a three-tower development, and this rendering appears to show those three towers, but we’re still checking on that.

In the high-rise development, one-bedroom condos will be priced from $550,000, two-bedroom plans from $750,000 and three-bedrooms from a whopping $1 million. Interiors include 9.5-foot to 10.5-foot ceiling heights, hardwood floors and “top-line American and European cabinetry and appliances,” according to the developer’s press release. Floorplans and features are still being finalized. Amenities? Concierge, 24-hour doorman, indoor swimming pool, fitness center and private storage rooms.

A “pre-sales VIP registration program” is already underway, and sales are slated to begin in February. Groundbreaking is anticipated for fall 2007, and the first homes are expected to be delivered at the end of 2009. We’ve put in a call to the developer and hopefully will have a few more details soon. In the meantime, what do you think of Lagrange’s design?