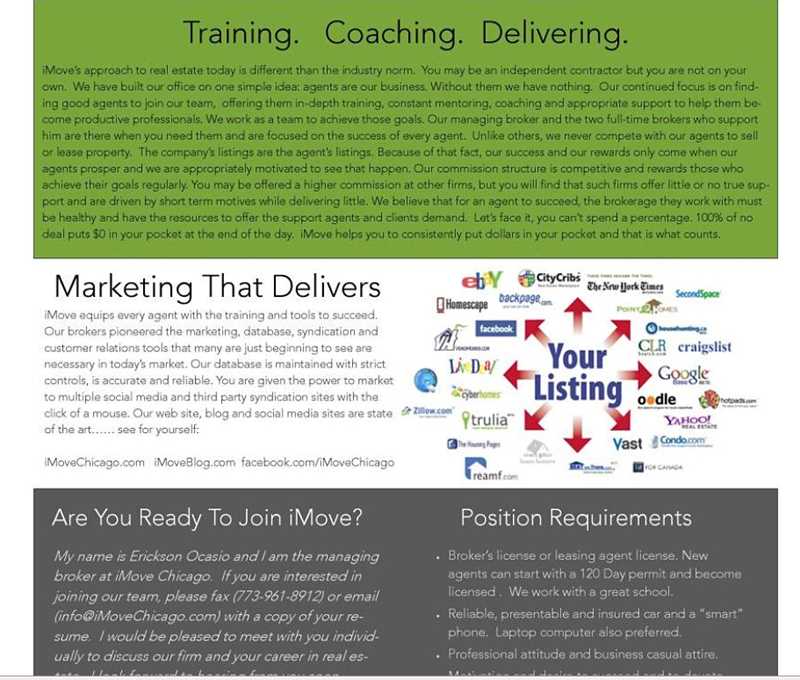 There are scores of rental services on YoChicago’s do-not-call list. We’re singling out twelve of them – the ones we consider the dirtiest dozen – for a closer look, as part of our Craigslist Apartment Cleanup.

The top spot (chronologically) on our dirtiest dozen roster went to Rent Proactive. Next up on our roster was Urban Lux.

The number three spot goes to an outgrowth Chicago, an outgrowth of the now-defunct Rent Smart, itself a successor to the also-defunct Blue Property. iMove’s Managing Broker, Erick Ocasio, has been associated with all three firms, and we first called attention to misleading advertising by him nearly 7 years ago.

The order of our selection isn’t meant to imply that one company is worse than the other. We don’t believe there are enough differences among the companies in our dirtiest dozen to rank order them.

Longevity is the first qualifier for earning a place among our dirtiest dozen – the company has to have first come to our attention some time ago. An online presence that we deem to be significant and frequently untruthful is the second criterion. The goals of the Craigslist Apartment Cleanup include seeking sanctions for illegal online behavior and legislative changes to reduce its incidence, and that requires us to focus on behavior that we can carefully document over a period of time.

We recently posted about iMove Chicago’s misleading property ads. In the course of that post we wondered whether iMove’s promises to new agents were any more credible than the ones in its property ads.

Leasing agents will stay at a company that delivers on its promises, and quickly abandon one that doesn’t. Let’s look at iMove Chicago’s agent-retention record.

According to the IDFPR database, only four of the 28 agents were licensed at the time they joined iMove. None of the four currently holds an active real estate license. One is a licensed Home Inspector and one is a licensed Community Association Manager.

Six of the 28 named individuals acquired licenses after joining iMove, and five of those six licenses are still active. Only one is shown in the IDFPR database as associated with iMove Chicago, and that license is sponsored by iMove’s Erickson Ocasio.

Other individuals joined and left iMove Chicago without having been named in a blog post, and yet others joined and are still there. One of the ones who joined and left before attaining her license reached out to me by email with information about iMove’s operations.

From what we can document, iMove Chicago has a 1 in 29 agent-retention record. Read the promises in the screen cap, above, of iMove’s recruiting ad at Craigslist in light of that record. 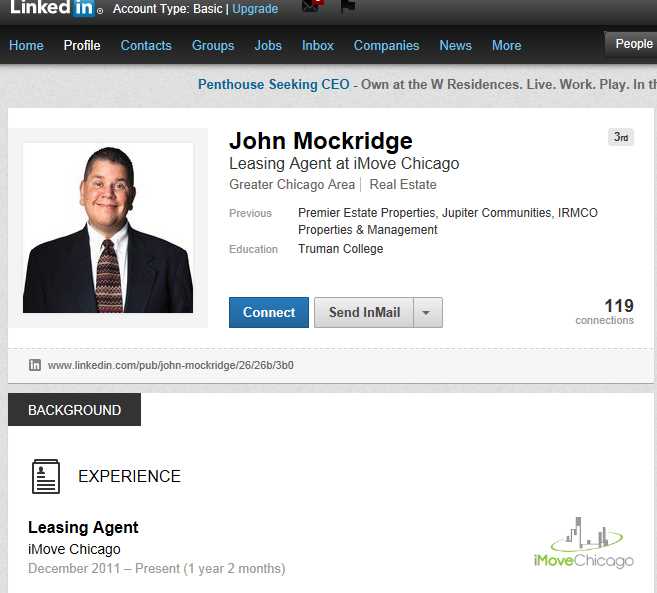 The iMove-ex who reached out to us suggested we take a closer look at John Mockridge, an iMove agent who was issued a Leasing Agent license on October 26 of last year.

According to Mockridge’s LinkedIn profile he has been employed at iMove since December of 2011. He presumably started at iMove, as do most of its new hires, on a 120-day leasing agent permit. Is he lying about his dates of employment, or was he committing a misdemeanor violation of the Real Estate License Act by being continuously employed at iMove well beyond 120 days?

We’ve documented a great deal more about iMove Chicago’s online and offline behavior, and we’ll continue to document it, as we will for all of the dirtiest dozen. In due time we’ll present that documentation to the state licensing authorities, and it will be part of the case we make to spur the state legislature to reform the licensing law.

Newer Post
Visit the secret spaces atop Chicago
Older Post
Yet another River North apartment tower, at Chicago and LaSalle