Did an iMove Chicago agent use the C word in a Yelp review? 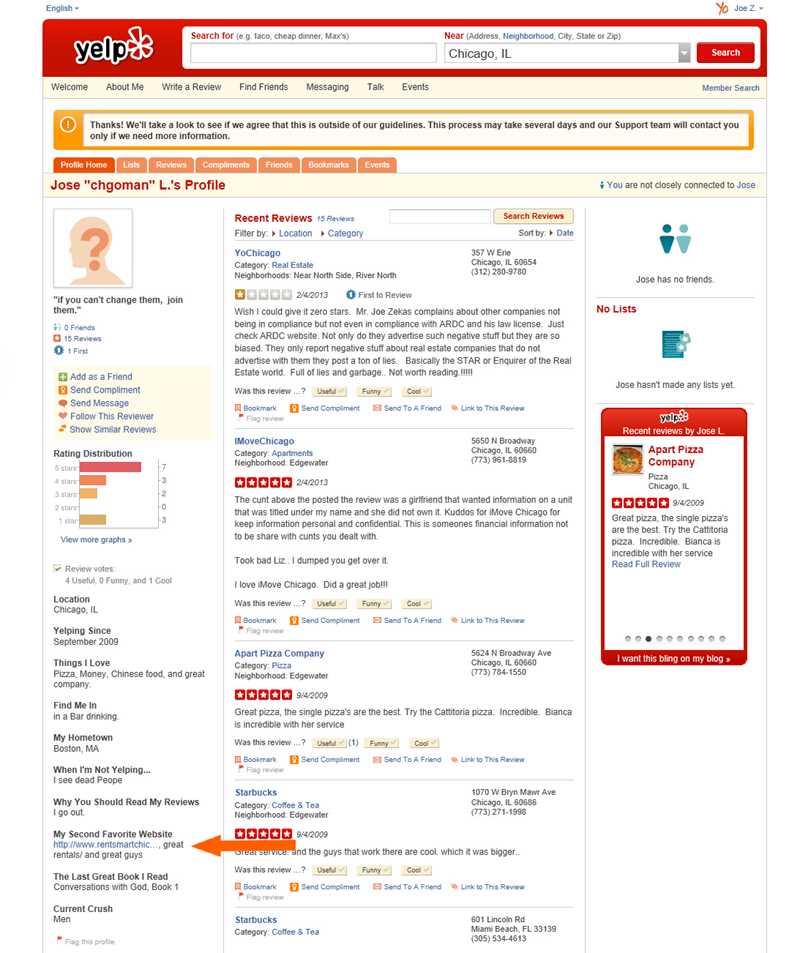 Jose L recently posted a 5-star Yelp review of iMove Chicago in which he used the C word – twice – to describe a Yelper who had negatively reviewed iMove on July 10 of last year. You can see Jose L’s ugly review in the screen cap, along with his deranged Yelp review of YoChicago. For the record, I haven’t practiced law in more than 20 years, which accounts for my status at ARDC.

YoChicago is ineligible to be reviewed on Yelp. The YoChicago business listing on Yelp was created by agents at another rental service, who then proceeded to post now-deleted lies about us.

ADDED: I’ve just received an email from Yelp. The YoChicago listing has been removed.

Jose L‘s “second favorite website” on his Yelp profile is Rent Smart Chicago, a firm with which a number of iMove Chicago’s agents were previously affiliated. Is Jose L one of them? Is a competitor out to destroy iMove by appearing to be one of its agents?

It may be sheer coincidence but, after our recent post on iMove, we’ve had a flurry of juvenile comments on YoChicago from a troll using such charming email addresses as eatme@aol.com, eatmehole@aol.com, eatme1982@aol.com and eatmyhole@aol.com. We only receive that type of comment when we write about a Chicago rental service. All such comments, needless to say, are sent to our trash bin.

Once again, we’ll wonder why any renter or landlord would do business with this company.

Newer Post
Which Chicago neighborhoods have the most foreclosures?
Older Post
Start your May 1st apartment search now