A guide to high-rise living in Lincoln Park 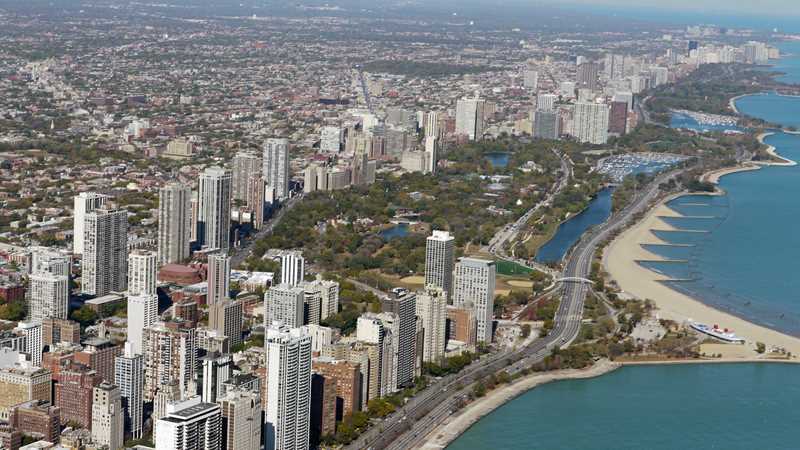 An aerial view of Lincoln Park from North Ave (1600 N) to Diversey Pkwy (2800 N) explains a great deal about the attractions of living in a high-rise in Chicago’s Lincoln Park neighborhood, and where those high-rises are situated. 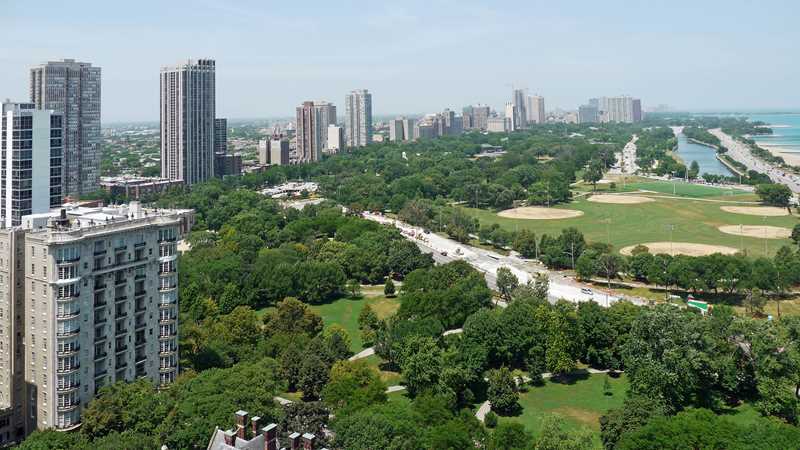 The broadest expanse of one of the nation’s greatest urban parks is, literally, the front yard for tens of thousands of residents.

The Lincoln Park neighborhood itself needs little explanation. It’s one of America’s iconic urban destinations for those who can afford it – and the range of housing options ensures that many more can than imagine they can.

Rather than explain the pluses and minuses of the Lincoln Park neighborhood, this Guide focuses on the attractions and drawbacks to buying and renting a high-rise apartment home in Lincoln Park. 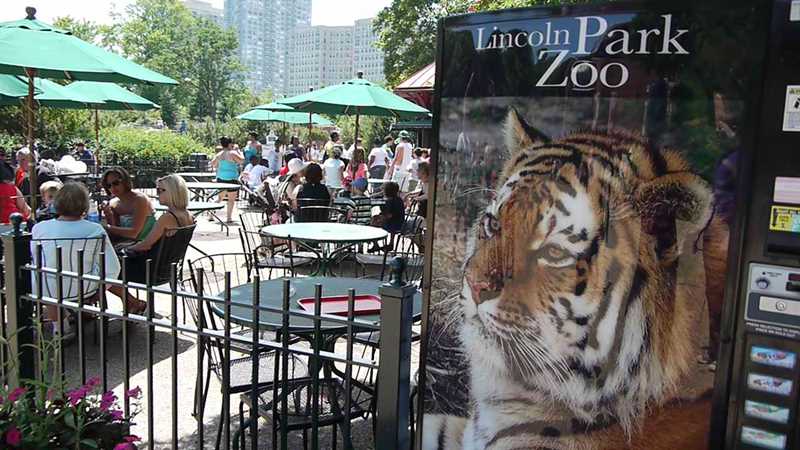 Although the park stretches for nearly 6 miles along Lake Michigan’s shoreline and spans 1,208 acres, many of its popular attractions are in the Lincoln Park neighborhood. Those attractions include nearly a mile of sandy beach between North Ave and Fullerton Pkwy, the heavily-visited admission-free Zoo, the Cultural Center, the Conservatory and gardens, the Peggy Notebaert Nature Museum, the Chicago History Museum, North and South ponds, the new Nature Boardwalk, South Lagoon, Diversey Harbor, the secluded Alfred Caldwell Lily Pool, playgrounds, running and bike paths, baseball and softball fields, tennis and volleyball courts, a golf driving range – and more. 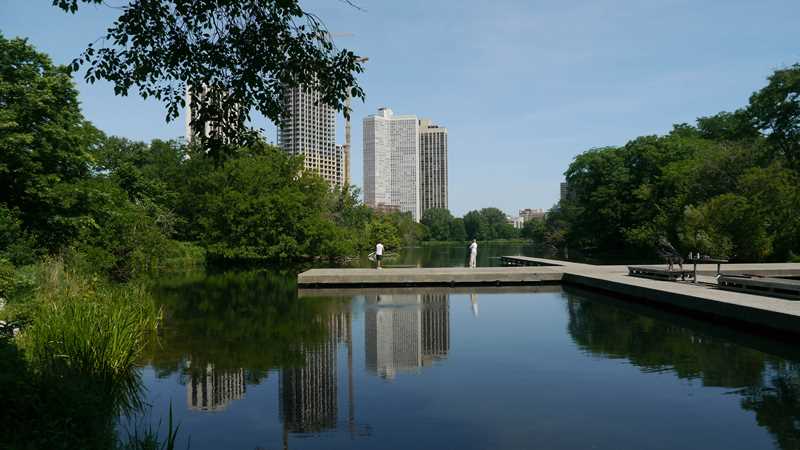 The seasonal Green City Market, every Wednesday and Saturday morning from May through October toward the southern end of the park, is the city’s largest farmers market and always draws a crowd.

The part of Lincoln Park closest to the park is comprised of three very distinct areas, each spanning a half a mile from south to north. 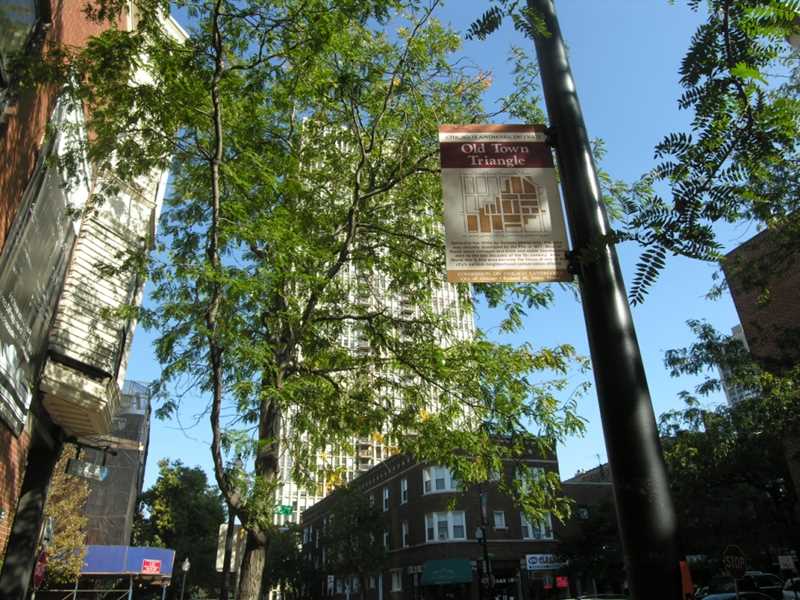 It has the best proximity to downtown, to North Avenue Beach, and to the sprawling array of big-box shopping along the Clybourn Corridor. The open vistas along the park contrast sharply – and pleasantly – with the narrow, low-density, walkable streets and historic homes of the landmark Old Town Triangle district just to the west of the string of high-rises lining the park.

The eastern edge of Chicago’s Mid-north sub-neighborhood offers an eclectic mix of rental and condo high-rise housing ranging from the Beaux Arts gem of the Belden-Stratford Apartments to tired 60s-vintage buildings. The commercial corridor to the west, along Clark Street, has experienced a number of vacancies recently, but is still home to a decent selection of restaurants and bars.

Fullerton to Diversey Pkwy. The park becomes quieter, and nature more dominant, as you move north of Fullerton. 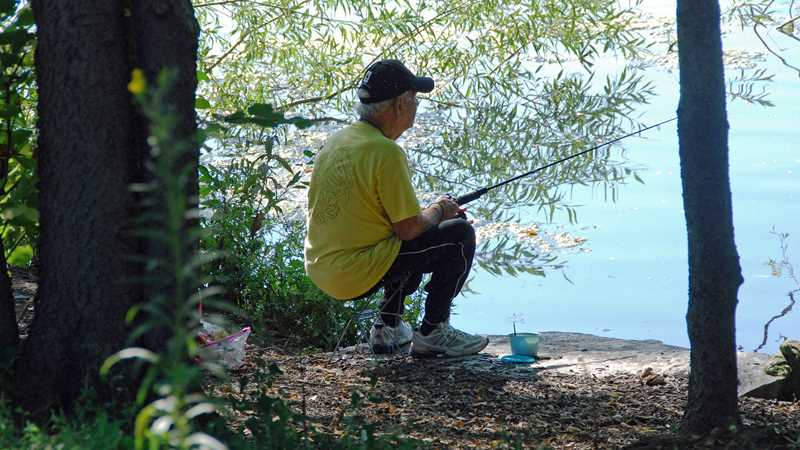 The North Pond Nature Sanctuary, centered around a 13-acre pond, is a resting stop for many species of resident and migratory birds, turtles, frogs and home to a small beaver colony. The 714-dock Diversey Harbor spans the eastern edge of the park. Mies van der Rohe glass curtain-wall towers, at 2400 Lakeview and 330-340 W Diversey, book-end this span of the park. They’re flanked by Mies-influenced high-rises at 345 W Fullerton and 2800 N Lake Shore Dr and contrast wonderfully with neighboring vintage buildings from the 20s. 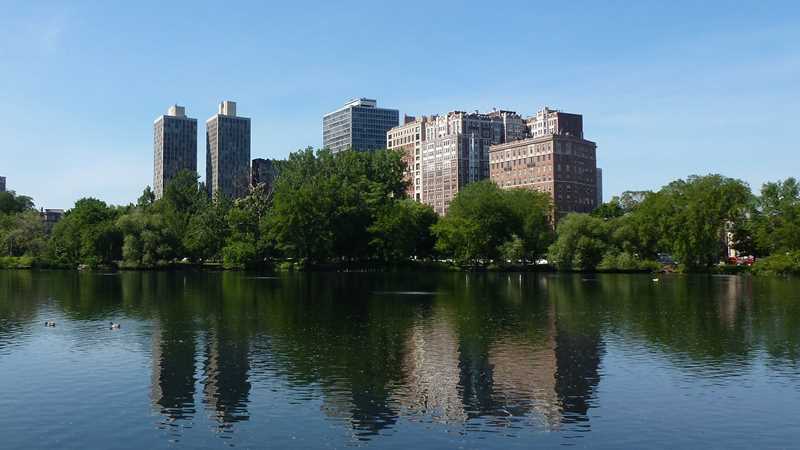 This neighborhood is still home to several of the great mansions that were once common here, including the Theurer-Wrigley and Dewes homes, which are currently listed for sale for $9.5 million and $9.9 million, respectively.

The commercial strip along Clark Street typically caters to a younger, less affluent crowd than residents of the park-front condos and co-ops.

The dominant characteristic of Lincoln Park high-rises is that they’re mostly older buildings, dating back 25 years or more, with a single exception. What that means in practice is that none of them can match the lavish common-area amenities packages of apartments and condos built within the past 10 years in downtown Chicago, although some buildings, including 2020 N Lincoln Park West, have recently spent millions to update their common areas and amenities. A single building, 2650 N Lakeview, for example, has an indoor pool, although the new Lincoln Park 2520 will also have one. Many of the buildings, and virtually all of the vintage ones, have no balconies or other private outdoor space and don’t have and can’t accommodate the in-unit washer / dryers that have become commonplace in recent construction. 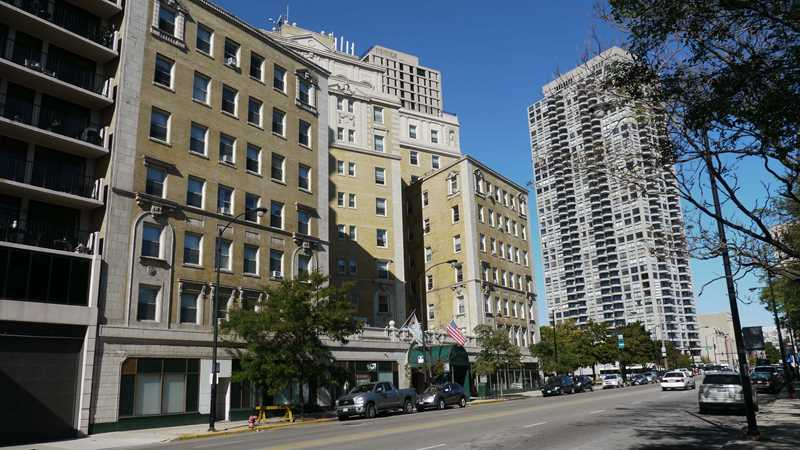 The sheer attractiveness of living in Lincoln Park overcomes those disadvantages for many. In addition, the area’s homes often offer more spacious layouts than you find in newer construction and frequently have a (sometimes significant) price advantage.

New construction. Lincoln Park has been one of the nation’s most attractive residential neighborhoods for generations, and locations close to the park have long been in high demand. As a result, new high-rise construction is rare. 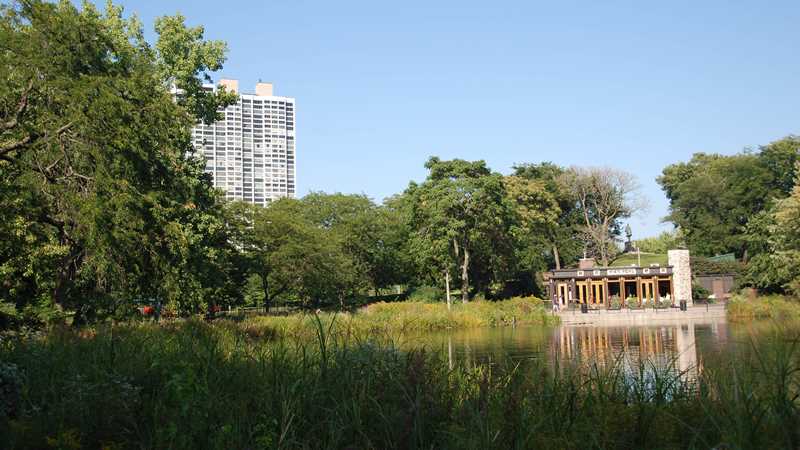 Lincoln Park’s newest apartment high-rises were completed in 1987. Lincoln Park 2520, a 39-story luxury tower that’s nearing completion at 2520 Lakeview, is the first condo high-rise to be built in decades and is likely to be the last new high-rise built in Lincoln Park for many more years. Prices range from the mid-$700s to upwards of $5 million.

Co-ops. Four of the city’s most sought-after cooperative-ownership buildings are located in Lincoln Park: 399 W Fullerton, and 2430, 2440 and 2450 N Lakeview. These 1920s-era vintage gems were built to attract socially-prominent Chicagoans and typically have large, gracious apartments ranging up to 8,000 square foot full-floor homes that easily accommodate families. Turnover is infrequent in these buildings, and only a few are available for purchase at any given time.

Condos. The great majority of newer high-rise rental buildings in Lincoln Park converted to condominium ownership in the mid- to late-1970s. Thousands of units sold rapidly in a frenzy of “condomania” as residents feared not buying would force them to relocate from Lincoln Park. Several of the area’s vintage buildings also converted during that time span, but the majority remained rental. Earlier in the 70s two buildings, 1920 N Clark and 2500 N Lakeview, were built as condominiums and a vintage building, The Pierre at 2100 Lincoln Park West, was gut-renovated as a condominium.

Lincoln Park high-rise buyers now have a wide range of options to choose from, priced from under $100,000 to well over $5 million.

When comparing different buildings, it’s important to consider what’s included in the monthly assessment. A building’s budget, balance sheet, special assessments and any pending litigation should be carefully considered during the attorney review period of a purchase.

Only one rental high-rise in Lincoln Park qualifies as a Class A full-amenity building, and it’s the only one that directly fronts the park: Eugenie Terrace Apartments, 1730 N Clark St. The building was completed in 1987, soars 44 stories and has 575 apartments, including a number of ground-level duplexes. 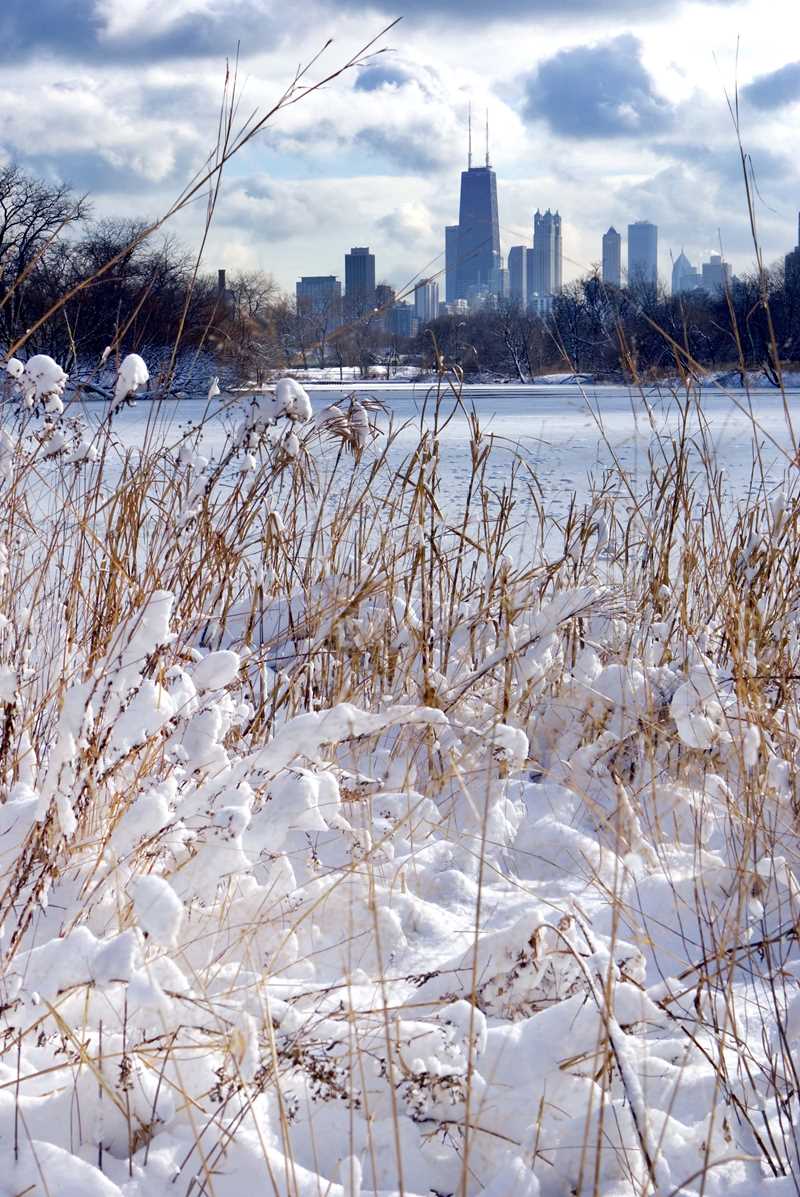 The vintage buildings, most tracing to the late 1910s and 1920s, typically offer a mix of smaller studio, 1- and 2-bedroom apartments that appeal primarily to first-time renters. Three-bedroom apartments are occasionally available at The Patricians, 401 W Fullerton Pkwy and Webster House, 2150 N Lincoln Park West.

As a general proposition, two- and 3-bedroom apartments with multiple baths are in very high demand and scarce supply in Lincoln Park rental buildings.

Short-term furnished housing is available at Eugenie Terrace and at the Belden-Stratford.

Condo rentals. You’ll occasionally find high-rise condos advertised for rent by owner, but almost all are rented through full-service brokerage firms and listed in the Multiple Listing Service (MLS).

Condo rentals are readily available, but at any point in time you’re likely to find fewer than 20 Lincoln Park high-rise condos listed for rent in the MLS. The condo rentals are often attractively priced compared to units in apartment buildings and tend to rent very quickly, the better ones within a day or two of being listed.

Many Lincoln Park children attend private schools, including the Latin School and Francis W. Parker School, both of which offer junior kindergarten through high school programs. 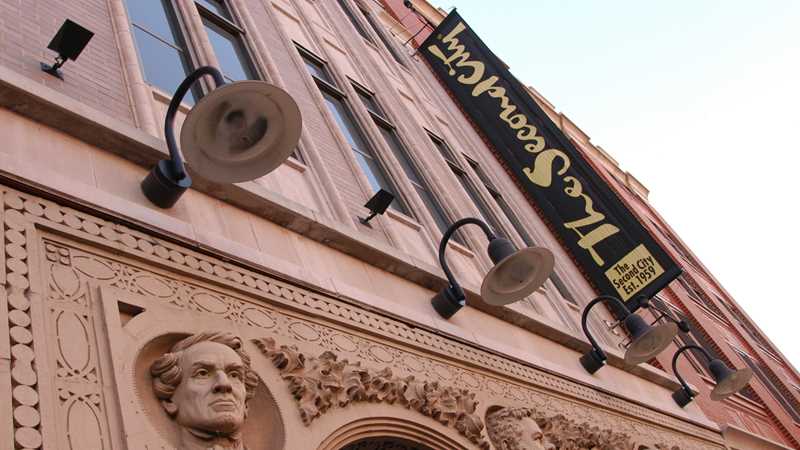 Parking in Lincoln Park is scarce, and expensive when available. I-GO and zipcars are available in a number of high-rise locations. Lincoln Park has few gas stations, and their offerings are always at the high end of the price scale.

The high-rise areas of Lincoln Park are underserved by the area’s major grocers, mostly due to land scarcity, and access to Jewel, Dominick’s, Whole Foods and Mariano’s is inconvenient, especially for the carless. 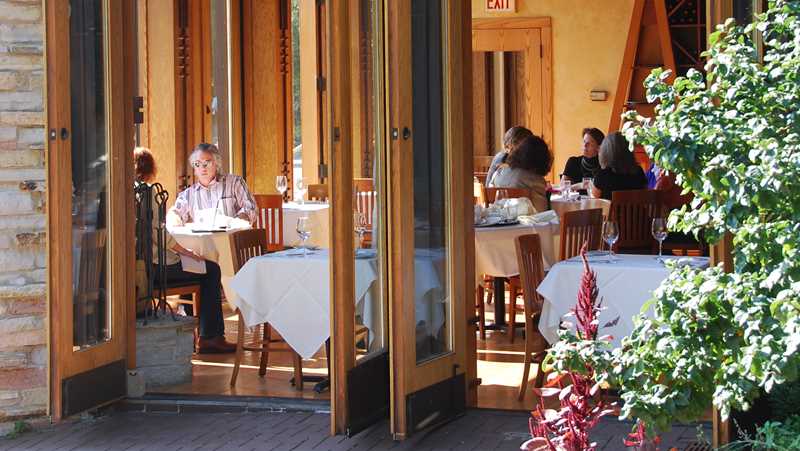 Treaure Island Foods, which bills itself as “America’s most European supermarket,” is near the southern edge of Lincoln Park and the recently-opened Trader Joe’s is at its northern edge. Big Apple Finer Foods and Lincoln Park Market are mid-sized grocery stores that receive mixed reviews. 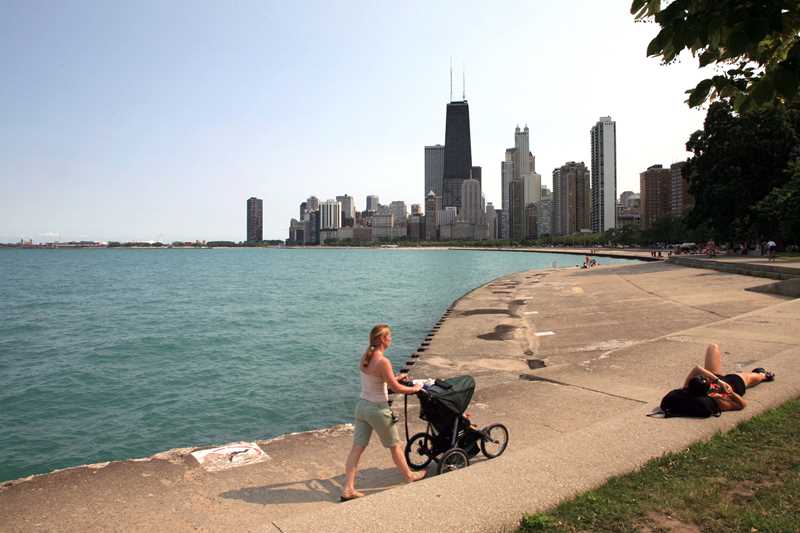 If you’re planning to buy or rent in Lincoln Park, real estate brokers can be a time-saving source of valuable expertise, or your worst nightmare if you work with someone who is not familiar with the neighborhood’s diverse housing stock and price points.

Rental services, in YoChicago’s opinion, almost always offer either no service or a disservice to renters. Consult our do-not-call list for who to avoid.

Working with an experienced agent affiliated with a traditional firm is your best bet. Insist on someone who has lived in Lincoln Park for at least 5 years, who concentrates his or her efforts in Lincoln Park and who has developed broad familiarity with availability and market conditions and the pluses and minuses of the various buildings.