Kelleher on Chicago Spire: "This is getting built" 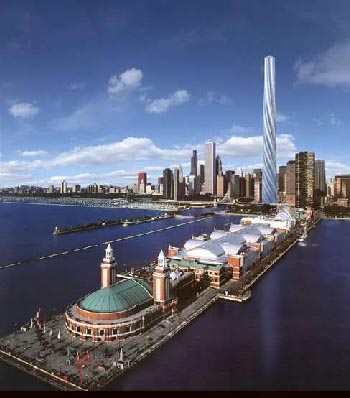 Thus spoke Shelbourne Development‘s Garrett Kelleher before a crowd of more than 100 at Monday’s Grant Park Advisory Council meeting. The Chicago Tribune reports that the developer is confident enough to order foundations despite the fact that the 2,000-foot skyscraper has yet to receive city approval. Kelleher also took a small dig at The Donald, who called the Spire “financial suicide,” by saying the site of Trump Tower “is neither residential nor office.” Knowing Trump, he’ll probably fire back by calling the Irish developer a fat slob. Santiago Calatrava‘s latest version of the design, which some of us have taken to calling the Chicago Churro, was not on display, so perhaps the Spanish architect is back at the drawing board.