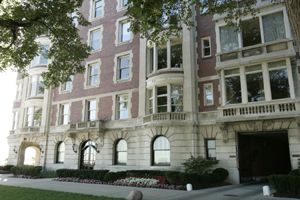 The Commission on Chicago Landmarks includes eight buildings in the elite East Lake Shore Drive district, but residents of only six of those high-rises can rightfully claim East Lake Shore as an address. The Drake Hotel’s address is officially 140 E Walton St, though the north side of the building fronts East Lake Shore and the Drake sign is an icon marking East LSD for anyone driving south on the Drive. Real estate agents have taken some liberties with the address of the other building in the disctrict that doesn’t officially have an East Lake Shore address, 999 Lake Shore (pictured here), though with a location this good, you wouldn’t think the subtleties of the address would matter.

This classic cooperative at 999 N Lake Shore Dr has a close relationship with The Breakers — Marshall & Fox designed both buildings, and in 1913 the two towers stood alone on East LSD. The American Institute of Architects describes the building as expressing “Second Empire exuberance” in its “AIA Guide to Chicago,” and the 1917 edition of the “Directory to Apartments of the Better Class” describes it as having “the most ideal location for apartment homes in the city.”

The city clearly labels the building’s address as North, but real estate agents apparently can’t resist the temptation to turn that “N” into an “E” in what’s clearly one of Chicago’s most sought-after addresses. Never mind that an address of 999 E Lake Shore would make for an awfully damp home.

While jaunting toward the lake, past The Breakers, you will indeed notice 999 as the last structure on the East Lake Shore strip, facing the lake on two sides, but 999’s actual entrance opens onto ho-hum, North Lake Shore. The official address will hardly matter once you’re inside 999 and dig on this available 3,800-square-foot condo, with its own “Florida room,” a sitting room overlooking the lake, and everything else you’d expect for $3.4 million.

Newer Post
What should a White Sox World Series victory do for Bridgeport?
Older Post
Time to make the condos