Mondial is a 15-story, 141-unit apartment tower at 910 W Huron St in the River West neighborhood.

Jack Berger was both the architect and developer of Mondial, which was completed in 2009. The building was planned as a condo but only 17 of the units were sold to individual buyers. The condo units were repurchased and the entire building is now rental. 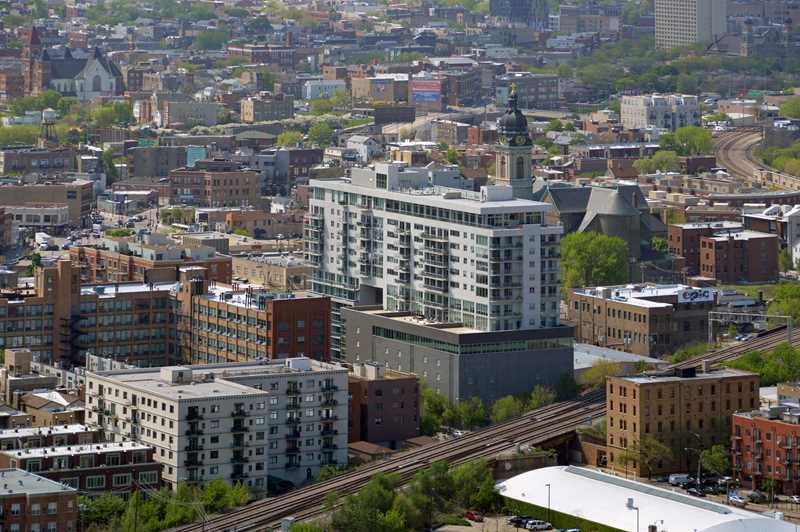 Berger built a number of buildings in River West that are recognizable by their grey color scheme and Le Corbusier-inspired architecture. 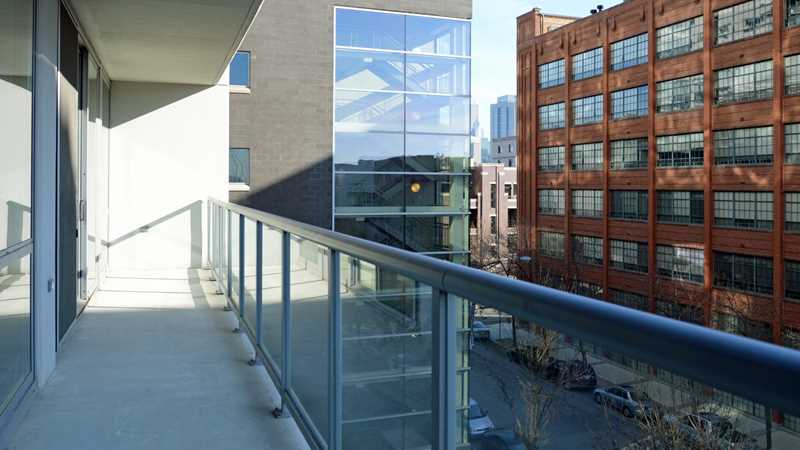 The apartments have high ceilings, ranging from more than 9-feet to 12 feet, and all have floor-to-ceiling windows and large balconies. Living areas have hardwood floors and bedrooms are carpeted. The apartments have individual heating and air-conditioning units and in-unit washer/ dryers. 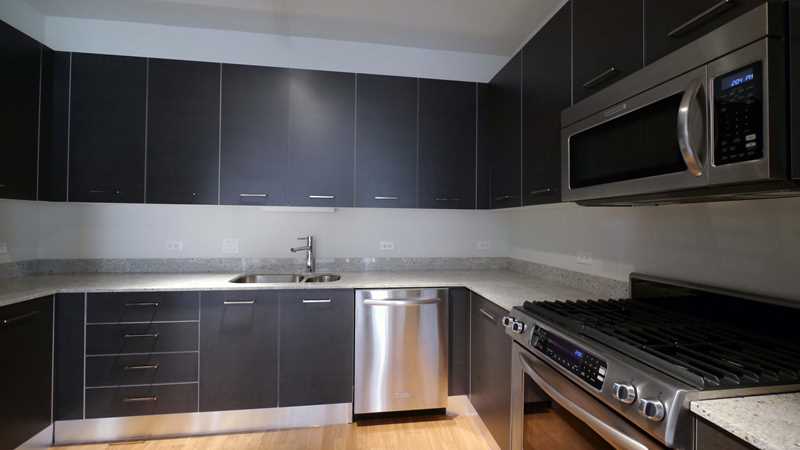 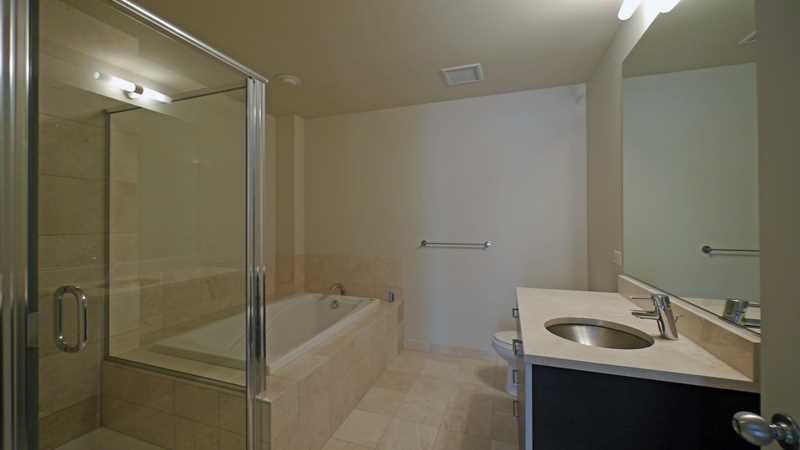 Two-bedroom, 2-bath apartments have a steeping tub and separate stall shower in the marble-tiled master bath. Closet space is limited in most of the plans, and that’s especially noticeable in the 2-bedroom apartments, which also have smaller-than-average bedrooms.

Views. Many of the units have spectacular views.

Mondial is the tallest building in the immediate area, affording upper-floor units dramatic panoramic views of the skyline.

Mondial has limited common area amenities, and does not have a pool. 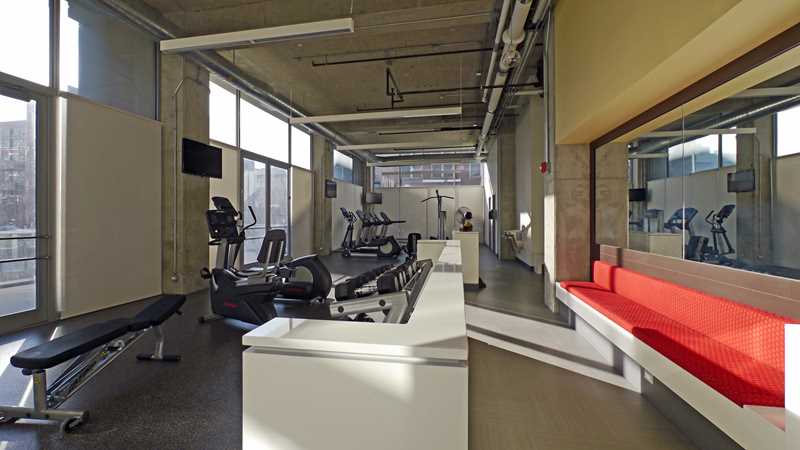 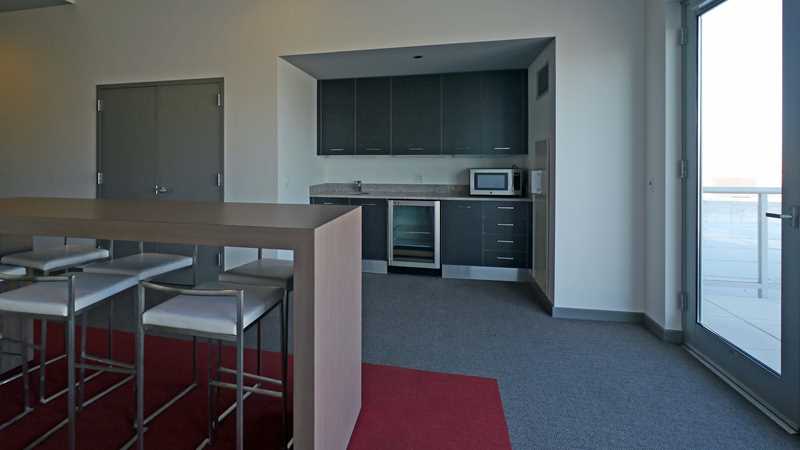 The building has a ground-level fitness room and a rooftop party room with a kitchen.

There’s a rooftop sundeck with panoramic views of the city and skyline.

Mondial is pet-friendly, subject to limits. The building has on-site management and maintenance staff.

River West is a predominantly residential neighborhood south of Chicago Ave, and Mondial is in a quiet, pedestrian-friendly pocket with good access to public transit and nearby restaurants and nightlife. 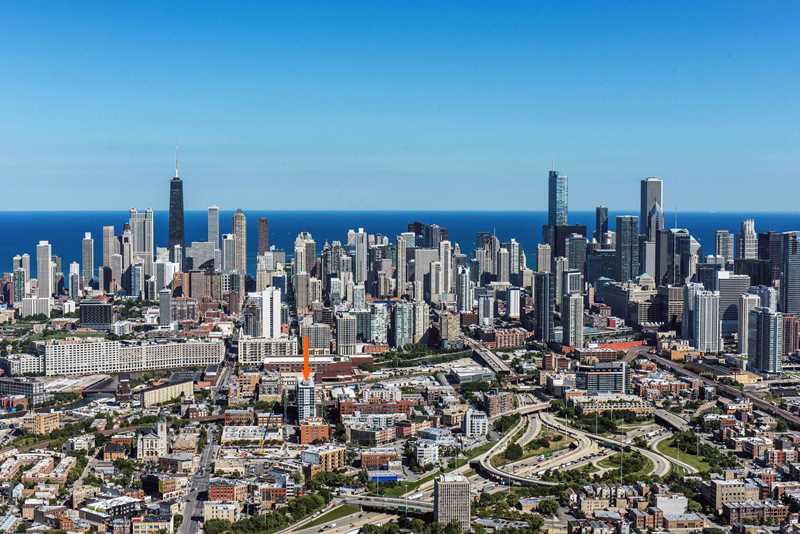 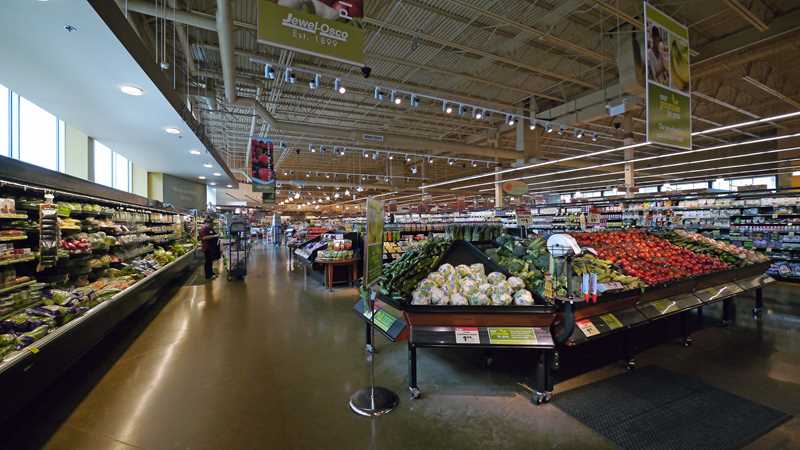 The nearest full-service grocery stores are a Jewel-Osco nearly three-quarters of a mile southeast of Mondial, and the new Target nearly a mile northeast on Division St.

A CVS Pharmacy is conveniently located on Chicago Ave, several short blocks from Mondial. Retail shopping is virtually non-existent near the building. Clybourn Corridor and Michigan Avenue shops can be reached fairly quickly by buses along Halsted St and Chicago Ave, respectively.

Dining, nightlife. There’s a good selection of highly-rated restaurants with a distinctive character within a few blocks’ walk of Mondial.

DeLux, just around the corner from Mondial, serves up “chef driven upscale bar food” for lunch, dinner and weekend brunches. 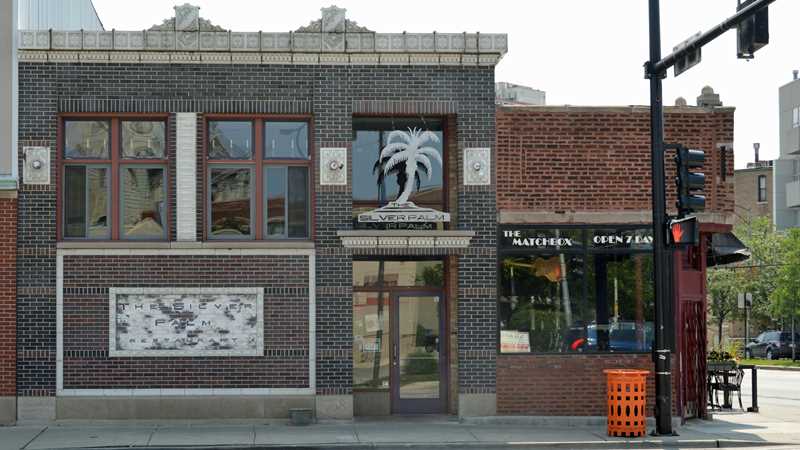 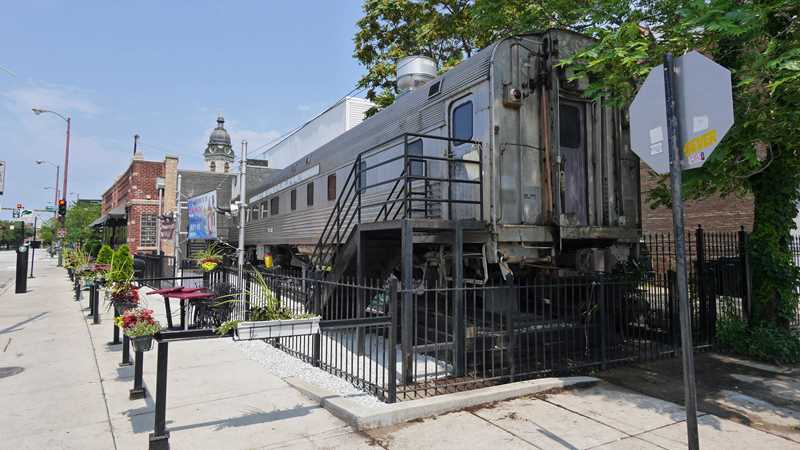 The Matchbox on Milwaukee Ave speculates that it might be “the smallest tavern in Chicago.” The adjacent Silver Palm diner is open seasonally in an original railroad dining car. 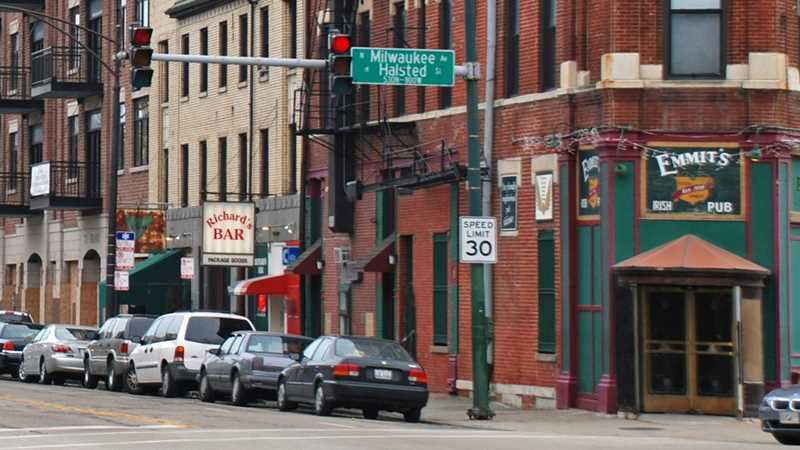 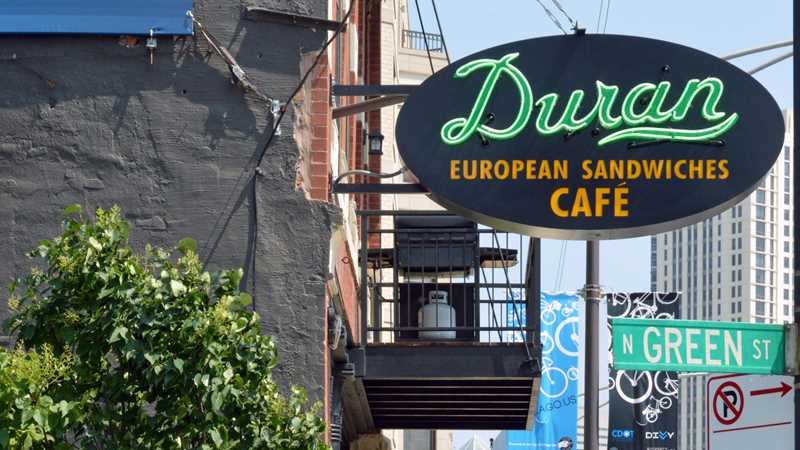 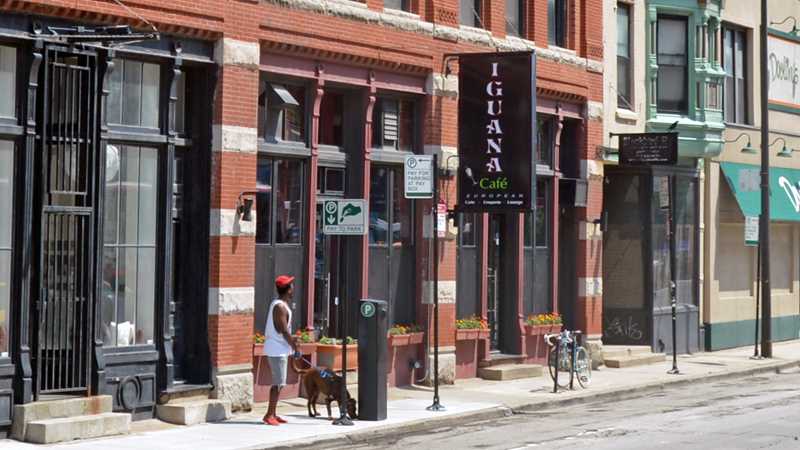 A few short blocks southeast of Mondial there’s a fun cluster of bars and restaurants near the intersection of Grand Ave and Halsted St, including Duran, Iguana, Emmit’s, Richard’s Bar, La Scarola and Piccolo Sogno. A major development planned for the intersection is likely to result in additional dining and drinking options.

The numberless dining and nightlife venues in River North and the West Loop are a short bike, cab or bus ride from Mondial.

Eckhardt Park, the nearest public park of any size, is more than half a mile northwest of Mondial. 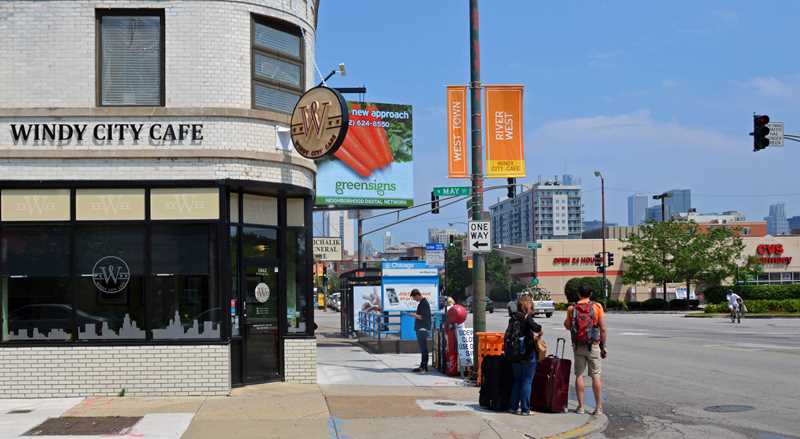 Mondial is a few blocks from the Chicago Ave and Grand Ave Blue Line stations, which also have multiple CTA bus route connections. 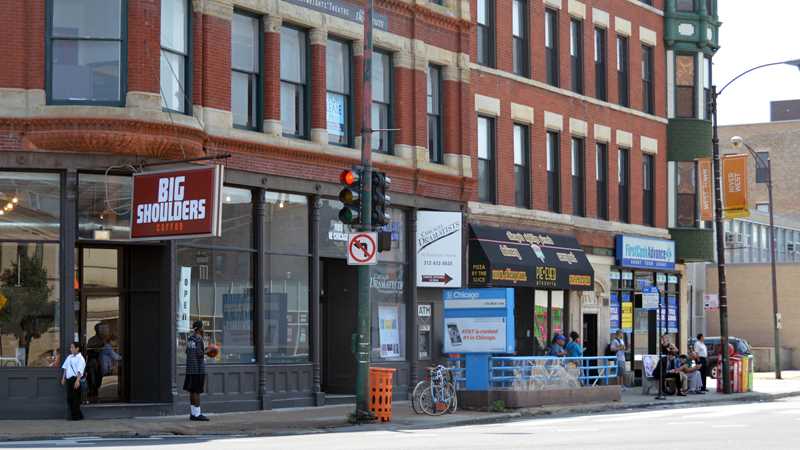 Mondial has quick access onto I-90/94 for north and westbound travelers, but far less convenient access south and eastbound. Expressway access to Mondial is also inconvenient. 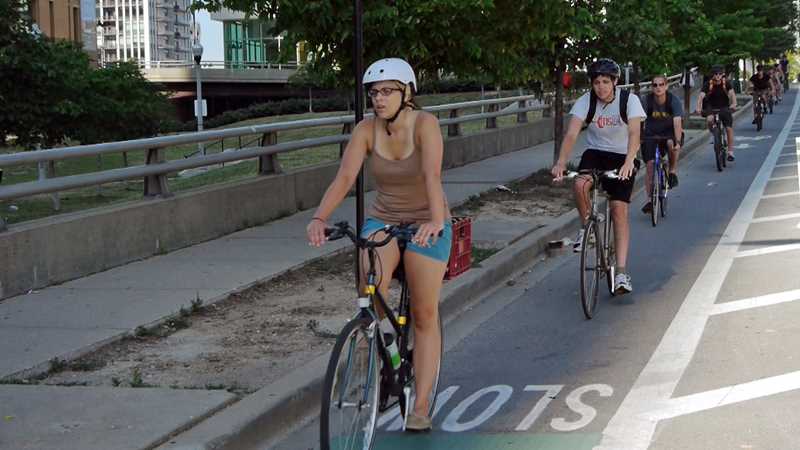 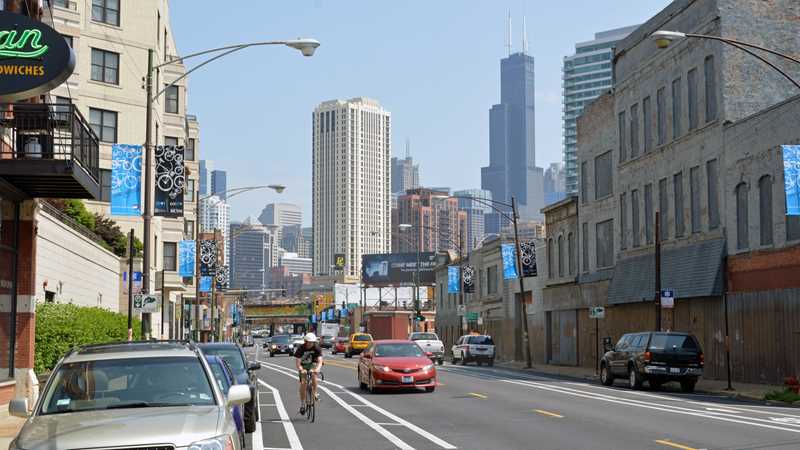 Zipcar rentals are available at a number of nearby locations. Taxi service is sporadic.

If you’ve lived at or visited Mondial recently, and are not a real estate agent, add your thoughts in a comment. Comments are moderated, and commercial messages are not allowed.

Rent a fully-furnished 1-bedroom at Kenect

Rent a fully-furnished studio at Kenect

A loft-style 3-bedroom penthouse at Kenect

Tour a studio apartment at Kenect

Tour a model convertible at Kenect

Tour a model 1-bedroom at Kenect

The views from Mondial