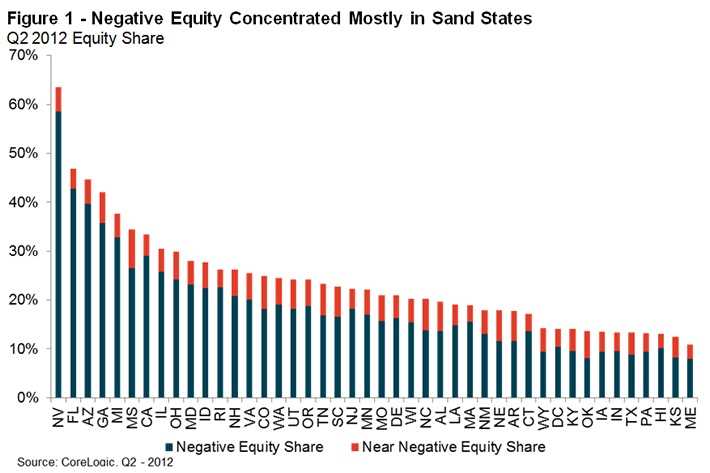 According to the latest CoreLogic statistics, 30.1% of all homeowners with a mortgage in the Chicago-Joliet-Naperville area owed more on their homes than they were worth, i.e. they were in “negative equity” territory. That’s the bad news.

The good news is that there was a significant decrease in the number of local homeowners in negative equity from the first quarter to the second quarter of this year. Quoting from a recent CoreLogic news release:

“The level of negative equity continues to improve with more than 1.3 million housholds regaining a positive equity position since the beginning of the year,” said Mark Fleming, chief economist for CoreLogic. “Surging home prices this spring and summer, lower levels of inventory, and declining REO sale shares are all contributing to the nascent housing recovery and declining negative equity.”

“Nearly 2 million more borrowers in negative equity would be above water if house prices nationally increased by 5 percent,” said Anand Nallathambi, president and CEO of CoreLogic. “We currently expect home prices to continue to trend up in August. Were this trend to be sustained we could see significant reductions in the number of borrowers in negative equity by next year.”

Broad numbers, of course, conceal more than they reveal about the state of local housing markets. In Nevada, 58.6% of all mortgaged homes are in negative equity status. In North Dakota only 5.5% of mortgaged homes are valued at less than the mortgage amount. There’s likely to be similar or even greater variability among ZIP Codes in the metro-Chicago area.