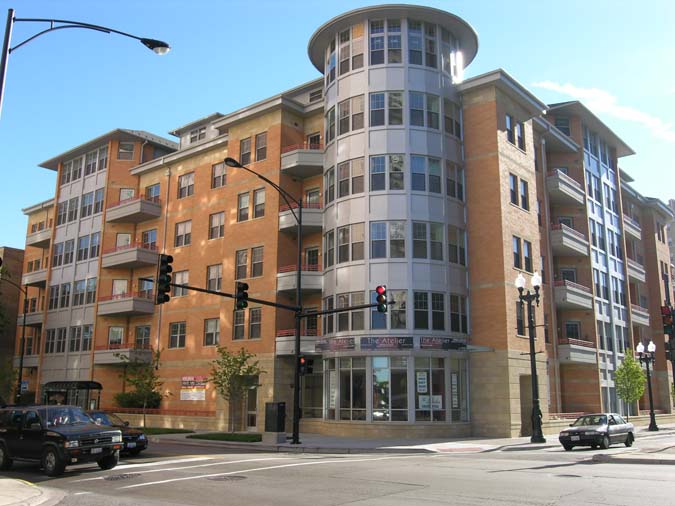 To round out Edgewater week, we had a chat with a neighborhood expert, Marion Volini, broker / owner of Lakefront Realty Group, located at 1048 W Bryn Mawr Ave. Volini fancies herself a bit of a pioneer on Bryn Mawr for marketing a new-construction development, Atelier, that has contributed to the turnaround of the once blighted avenue. Small businesses and restaurants like Ben’s Noodle Shop, Francesca’s Bryn Mawr, Starbucks, That Little Mexican Cafe, Flourish and a new Middle Eastern restaurant keep later hours and bring “more eyes to the street,” which Volini thinks keeps the neighborhood safer. Only six condos remain at the 39-unit Atelier, located at 5556 N Sheridan Rd. Four two-bedroom units are priced from the $380s to the $410s (including parking), and two penthouses– one of which occupies the corner turret and has 15-foot ceiling heights– reach to the $750s.

Along the coast of Edgewater, where Atelier joins a cluster of high-rises, Volini notices a mix of young professionals, empty-nesters and senior citizens. Moving farther west, the residential streets are dominated by more single-family homes and larger condos in smaller buildings, so families are more prevalent. The range of the housing stock, Volini says, is one of Edgewater’s greatest assets. It’s also what separates it from its neighbors to the north and south, Rogers Park and Uptown.

“We can accommodate people in Edgewater Glen and Magnolia Glen with smaller, beautiful single-family homes that are in the $500,000 to $700,000 range,” she says. “Occasionally you can get a real buy in the $400,000 to $500,000 range, but that’s slowly evaporating. Then you can get into Lakewood / Balmoral and get the million dollar homes. We have the range of housing stock in Edgewater that accommodates all lifestyles. It’s not as true in Uptown, and it’s not as true in Rogers Park. I think that has made Edgewater a very stable neighborhood.”

To Volini, stability is the key to Edgewater. “Edgewater is one of the most stable communities in the city,” she says. “It has been for decades. We have always been a very accepting community, so that everyone seems to coexist in Edgewater. There are families, singles, seniors… and everyone seems to be accepted.”

Volini notes that Rogers Park and Uptown, home to greater numbers of multi-unit buildings, have higher transient populations. With the recent spate of condo conversions, Volini thinks those neighborhoods are becoming more like Edgewater in terms of stability, but they’ll never match Edgewater’s wealth of single-family homes.