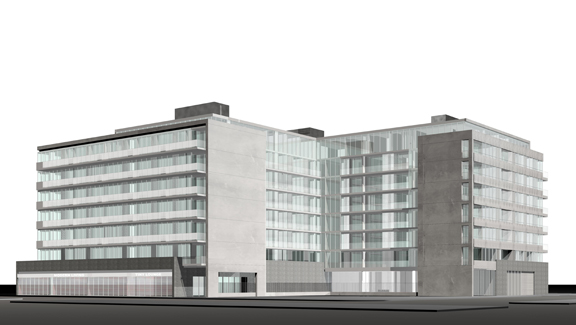 The Thrush Companies is planning an eight-story mixed-use building on the north side of Madison Street at Racine in the West Loop, according to David Chase, Thrush’s president and CEO.

The as-yet-unnamed project, designed by Brininstool + Lynch, will have a courtyard inspired by Japanese gardens. Common areas will feature a “contemplative rock garden” with running water and bamboo, Chase said. “It clearly has Japanese influence. If you want to talk about zen and feng shui — it’s that kind of thing.”

The building will have an accessible green roof, and the vast majority of the units will have private outdoor space. Buyers will have a say in the design of these spaces, overseen by landscape architect Daniel Weinbach & Partners, Ltd. Other building features include media and meeting rooms, an outdoor grilling area, an exercise facility and 7,500 square feet of retail on the ground floor.

The 155 one- to three-bedroom loft-style condos will have floor-to-ceiling windows and concealed ductwork. About 20 percent of the units will be set aside as affordable housing. Chase said 15 “penthouse-style” units will generate 20 percent of the project’s overall revenue. We’ll have pricing information soon.