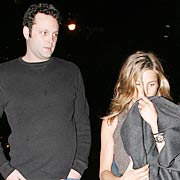 RedEye confirms today what we told you a few weeks ago: that Vince Vaughn has purchased the top-floor duplex penthouse at The Palmolive Building, 159 E Walton St. According to RedEye, the Hollywood star and Lake Forest native paid $12 million for the lavish 7,800-square-foot digs.

It’s hard to say whether it’s the highest price ever paid for a condo in the downtown Chicago market, but it’s definitely a contender. The $12 million transaction, which wasn’t registered in the Multiple Listing Service of Northern Illinois, exceeds all MLS high-rise condo deals in the downtown market over the last four years, according to several real estate agents we spoke to.

We’re happy to see a Swinger like Vaughn in the former Playboy Building, and are confident Hugh Hefner, who owned the building between 1965 and 1989, approves. Can we get the old nine-foot “Playboy Building” sign back and landmark it?

We hear (can anyone confirm this?) that Hefner filmed some episodes of his TV show Playboy After Dark in the penthouse, along with buddy Sammy Davis Jr. Perhaps Vaughn and pals like Will Ferrell and Owen Wilson could continue the tradition.

According to RedEye, Vince’s special friend, Jennifer Aniston, has stopped by a couple times to check on the progress of the $250,000 painting job and the pad should be ready for occupancy by Christmas.