Reader Sam asked Yo’s truly what was the highest purchase price of a unit in downtown Chicago? Well we did a little digging, and we can’t be definitive on this subject because not all home purchases are recorded in the Multiple Listing Service of Northern Illinois, which is our main reference. But here are a couple of contenders: We have it on very good authority that Vince Vaughn DID buy the lovely old 7,800-square-foot duplex penthouse at The Palmolive Building, as we speculated back in March (see picture after the jump – we don’t need People magazine to get us inside Vince and Jen’s bedroom.) The unit was listed for a little over $10 million. That transaction didn’t go through the MLS and the good folk at The Palmolive Building, 159 E Walton St, are yet to get back to us with the selling price.

The highest price recorded in the MLS over the last four years was an $8 million sale at 189 E Lakeshore Drive in March this year. The plush little pile is located in the old Mayfair Regent Hotel, which LR Development Company converted into The Mayfair, a high-end condo building. The five-bedroom, 5.5-bath penthouse, originally listed for $9.75 million, comes with an office, an exercise room, a huge private rooftop terrace, an attached studio and four parking spaces. Koenig & Strey agent Joanne Nemerovski says she sold the unit to a Chicago empty nester.
The unit was where LR Development Company‘s Bruce Abrams tragically jumped to his death in 1999.

(Speaking of LR, we found out today that the company dropped its name last Friday and has taken on the name of its New York-based parent company, Related Midwest.)

So, it’s interesting, Sam. The Palmolive penthouse is about half the size of the $28 million Trump pad, which is around 14,000-square-feet. The Palmolive penthouse, presumably, cost a little more than half the price of the Trump penthouse. Palmolive is vintage,Trump is new construction. Old and new homes both have their merits. The Palmolive fronts onto the fancy Mag Mile, while Trump is extolling the virtues of his pad in RiNo, which has views of the Chicago River and the lake. Do people want 14,000 square feet? Do they like River North that much? 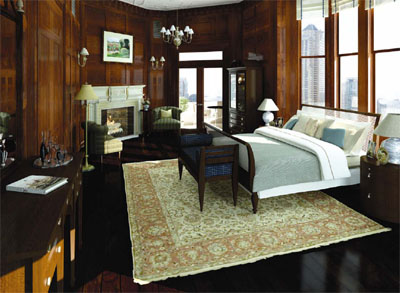