4 condos left at The Shops and Residences of Wicker Park 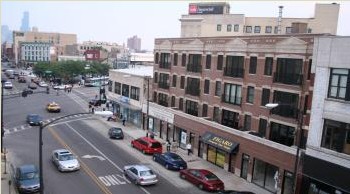 While we’re on the subject of condos on major streets in Wicker Park, developer Joseph Freed and Associates is offering immediate deliveries at The Shops and Residences of Wicker Park (.pdf), at 1232 – 40 N Milwaukee Ave.

The project comprises four brick buildings, each housing three condos and one retail space on the ground floor. Four condos remain for sale, priced in the $420s, according to Development Manager John Hoyt.

The buildings, designed by Sam Marts Architects and Planners, replace a one-story retail development with cell phone store, a jewelry store and a couple of vacancies, Hoyt says. Figaro European Shoe Design occupies one of the new storefronts, and Freed is seeking boutique retailers for the other spaces, he says.

Freed owns several properties nearby on Milwaukee Avenue, according to Hoyt. “The goal was really to help kick off the rejuvenation of our block by strategically purchasing pieces of land,” he says. “Our object is to change the merchandise mix of the neighborhood. We’ve kicked out a bunch of the older tenants that aren’t catering to the neighborhood.” Those included a wig store and a shop with gear for strippers, he says.

Freed’s redevelopment aims to preserve Wicker Park’s indie vibe, he says. “You’re going to see cool boutiques that keep the fabric.” In that spirit, the company is allowing artists to use several of its empty retail spaces free of charge for Around the Coyote, Wicker Park’s well-established interdisciplinary arts fest.

Newer Post
A tour of The Greenview in Rogers Park with developer Ben Myers
Older Post
Ripped from the headlines: developer accused of stealing from clients