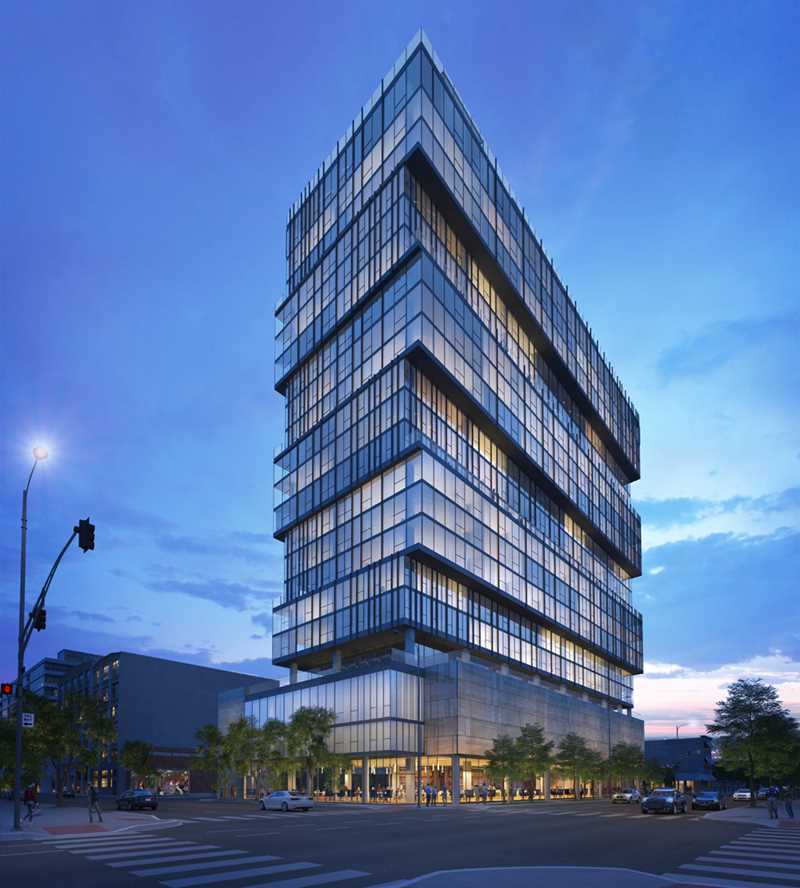 The development includes ground-level retail space. SixForty has been designed for LEED Silver certification and has a green roof and on-site storm water retention.

Construction began early in 2016. First occupancies began in July of 2017. 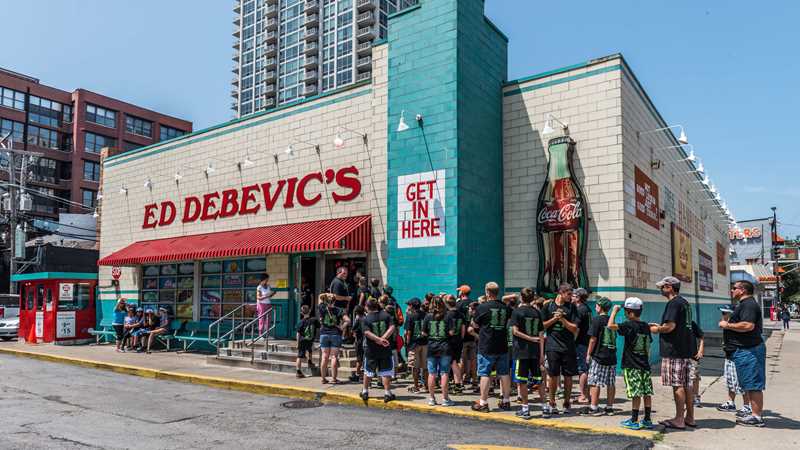 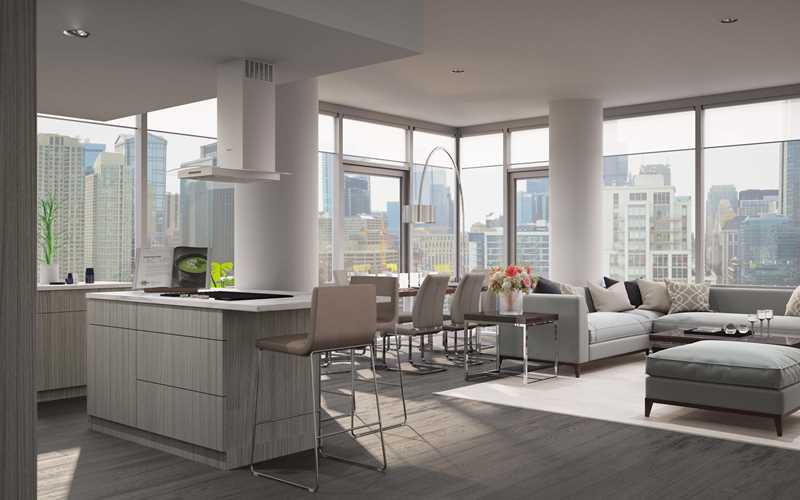 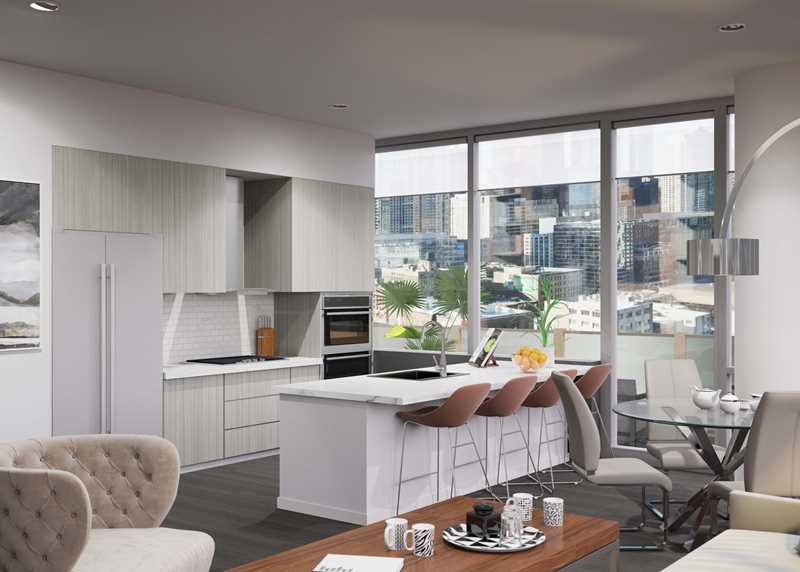 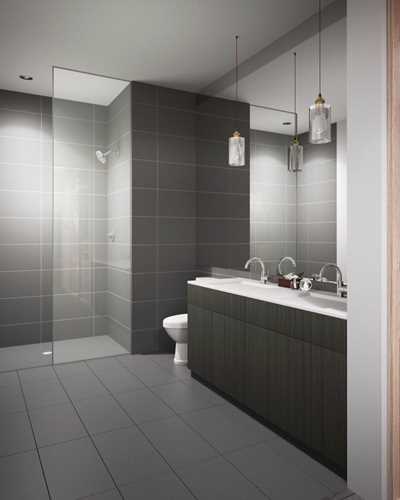 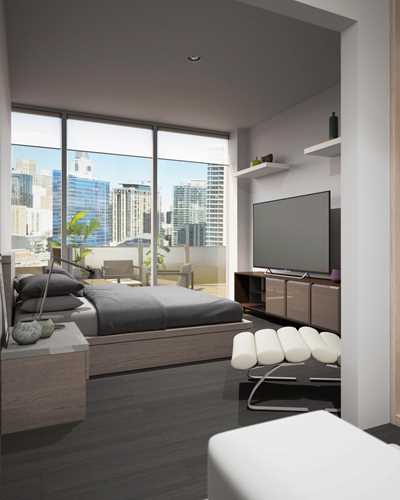 Baths have walk-in showers with frameless glass surrounds. A number of the apartments have private balconies.

Views. 640 North Wells is surrounded by largely low-rise development, ensuring spectacular skyline views to the north and south, and a fairly unobstructed view corridor to the west. The views to the east are constrained by new development directly across the street on the former Gino’s East site.

SixForty has an extensive and imaginative suite of amenities. 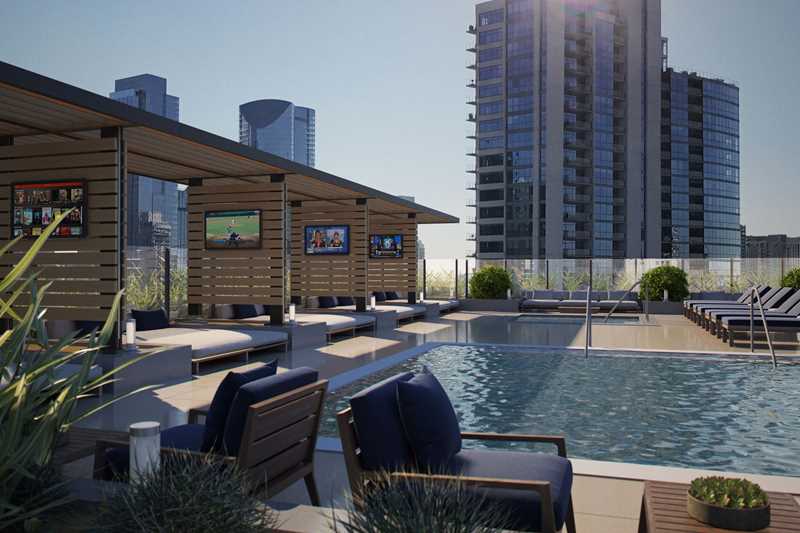 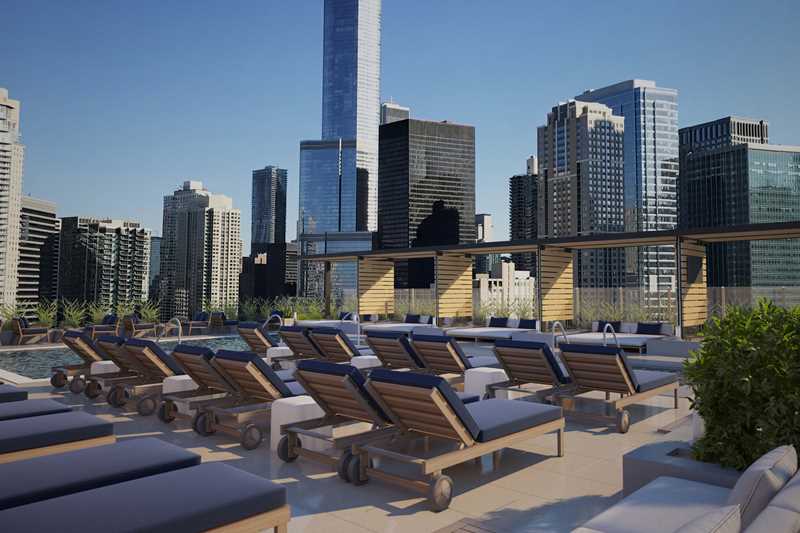 SixForty is one of only a few River North buildings with a rooftop pool. The pool deck has a hot tub, private cabanas with flat-screen TVs, and skyline views.

The 23rd floor “social club” has a restaurant-grade demonstration kitchen, a fireside library and dining suite, and a gaming lounge. 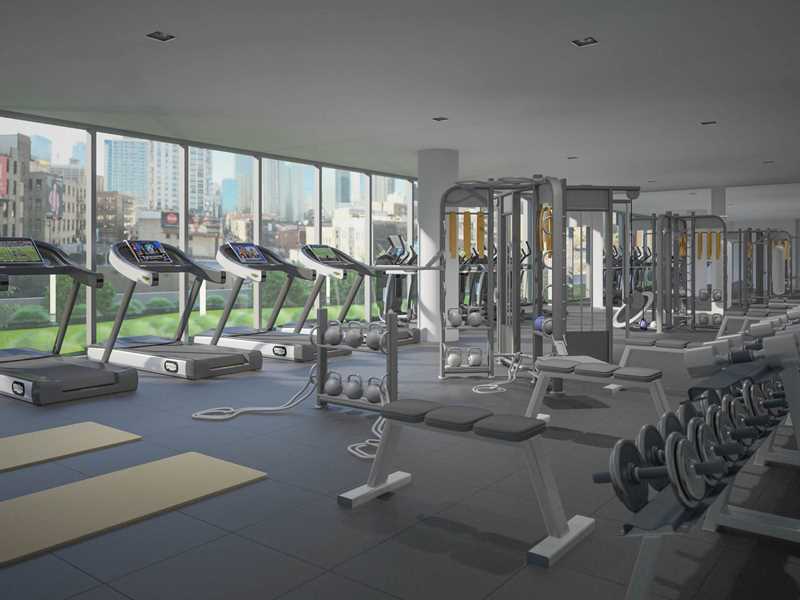 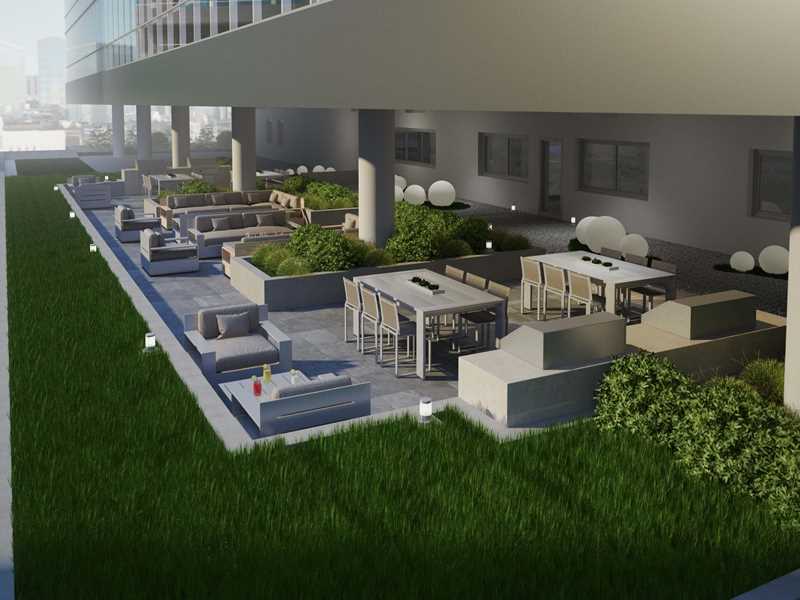 The fifth-floor amenities include a fitness center, and a landscaped terrace with grilling stations, outdoor dining, fire pits and TVs. There’s also a golf simulator and an outdoor putting green. 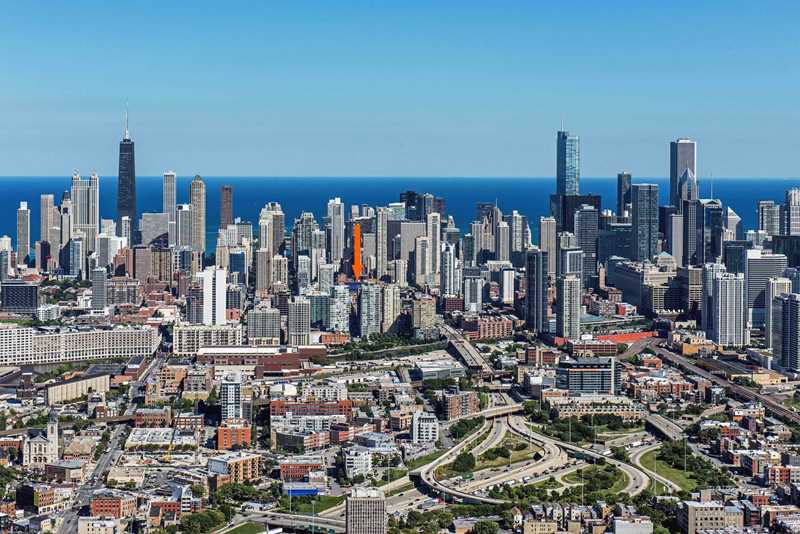 640 North Wells is near the geographic center of River North, affording the location good proximity to the Gold Coast, Streeterville and the Loop.

Loyola University’s Water Tower campus, home to its law, business, education and communications schools, is a few blocks north and east of the property. Northwestern and Lurie Children’s hospitals are a short walk further east. 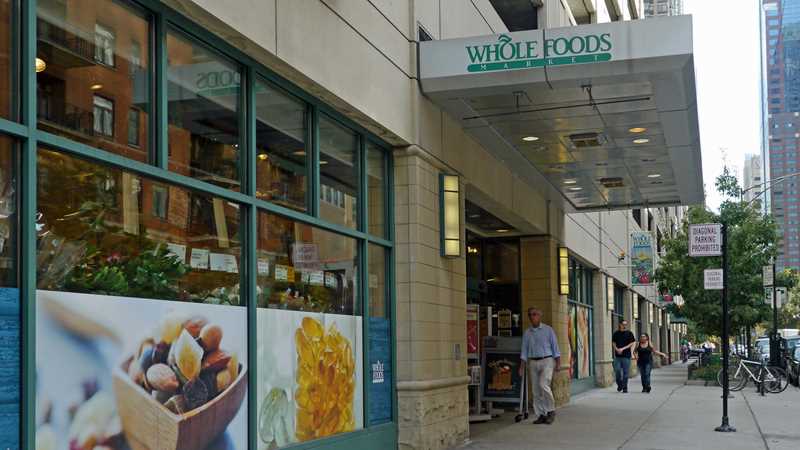 Shopping. 640 North Wells is a few short blocks from what Whole Foods bills as its “Gold Coast store” despite its River North location.

Jewel-Osco and Trader Joe’s are also within a few blocks of 640 North Wells.

A number of convenience stores are nearby, as are Walgreens and CVS pharmacies. 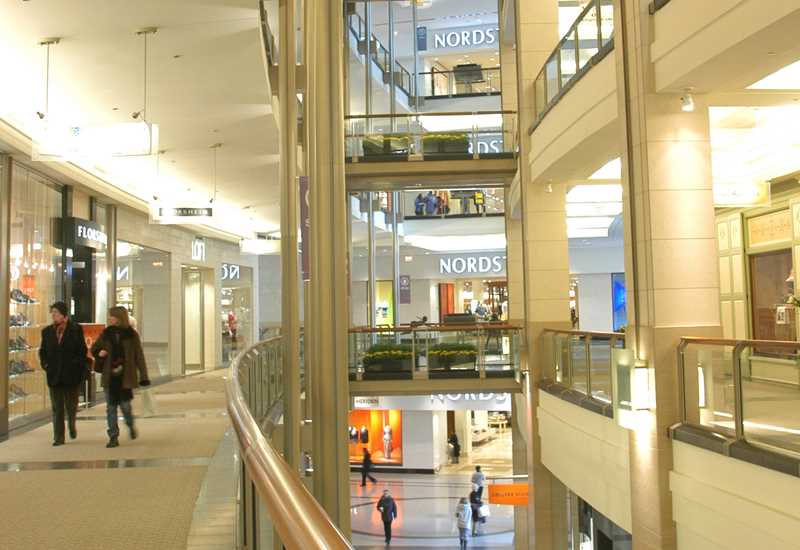 Michigan Avenue’s Magnificent Mile shops and The Shops at North Bridge, anchored by Nordstrom, are a half-mile east.

Oak Street boutiques are a few blocks to the north. Big-box retail stores abound in the Clybourn Corridor, a mile northwest and a new Target is just over a half-mile northwest.

640 North Wells is on the cusp of the River North Gallery District, which has been shrinking in recent years but remains a scene worth visiting.

Dining, nightlife. 640 North Wells is a short walk from a dense array of dining and nightlife options in River North and the Gold Coast. 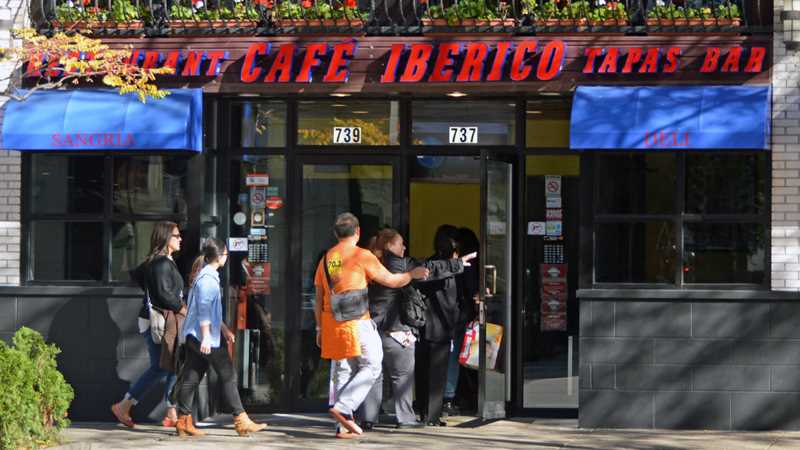 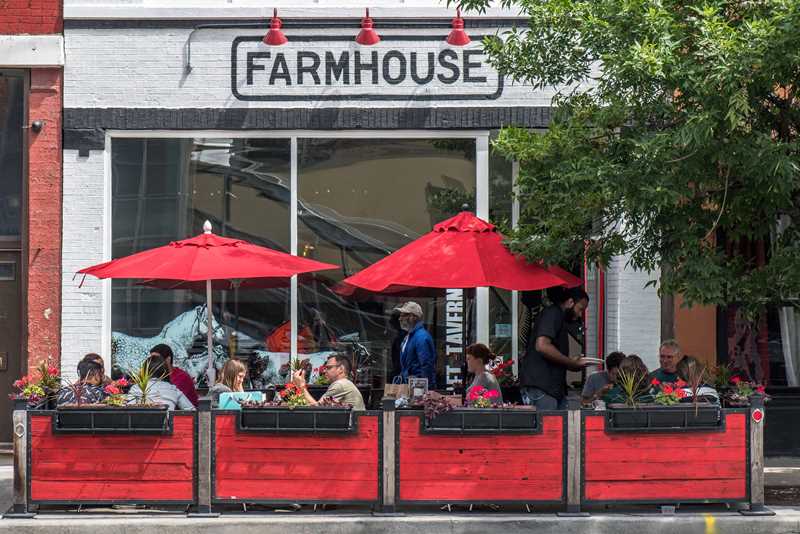 The 700 block of Wells St hosts Brehon Pub, Prosecco and the ever-popular Yolk. Farmhouse is just around the corner. 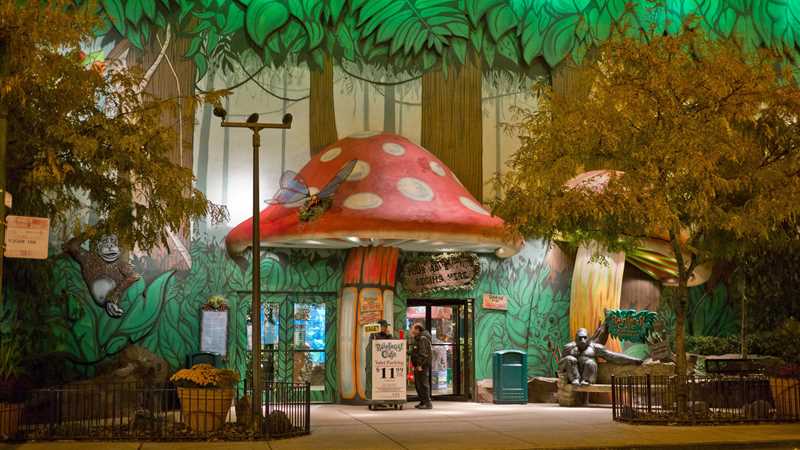 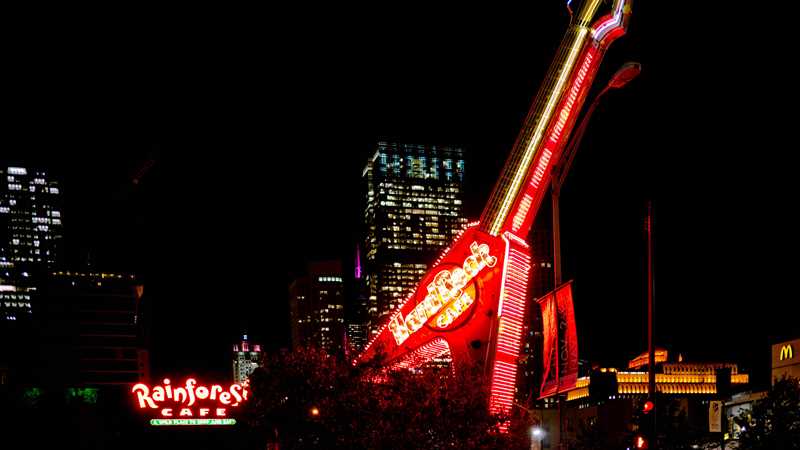 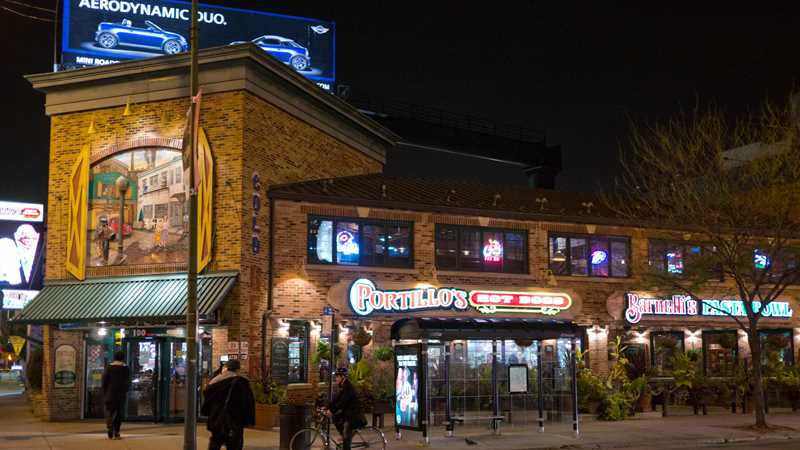 The immediate area is also home to many of the venues that draw crowds of suburbanites, tourists and conventioneers to the area. Hooters is across the street on Wells. The Rainforest Café, Hard Rock Café, Portillo’s and Rock N Roll McDonald’s are nearby – and that’s just for starters.

Parks, recreation. Most of River North is a park desert, and SixForty has limited proximity to public parks.

A variety of CTA bus routes traverse LaSalle St, Grand Ave and Chicago Ave within a short walk of SixForty.

The location has good access to I-90/94 and the city’s expressway grid via the Ontario and Ohio on / off ramps.

Zipcar car sharing locations are within a block or two of the building. Taxi service is available 24/7. DIVVY bikes are available nearby.

Note: SixForty is a YoChicago advertiser.

A convertible with a large balcony at SixForty

An 09-tier east-facing 1-bedroom at SixForty

A 1-bedroom with a large balcony at SixForty

A 2-bedroom plus den, 2-bath at SixForty

A large 1-bedroom at SixForty

A convertible apartment at SixForty

A 2-bedroom, 2-bath at SixForty with skyline views

An appealing 1-bedroom at SixForty

A sunny, west-facing 1-bedroom at SixForty