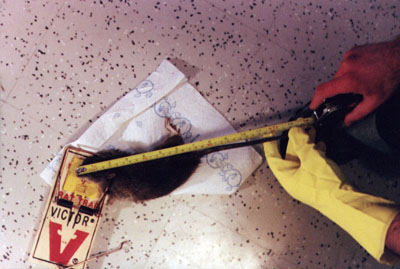 Disgusting wormy tails, large hairy bodies, red eyes visible from down the alley. It’s a nearly universal opinion, held by all but a sick and twisted few, that rats are the most disgusting animals on the planet. What do you do when you find out you have them for roommates? YoChicagoan Joe Jarvis (measuring a captured rat in the photo above) recounts his horrendous experience with a rat-infested apartment in East Village and a landlord who didn’t give a rat’s you-know-what.

“During the winter of 2002, one morning my roommate asked me if I had come home drunk and devoured his entire loaf of bread from atop the refrigerator. I had indeed come home drunk but was fairly certain I had not eaten twenty-odd slices of white bread and left the torn bag on the floor, with crumbs strewn across the kitchen linoleum.

“A few nights later, I woke up in the middle of the night and stepped into the hall toward the bathroom, out of which scurried a rat — a full grown city rat — onto and across my bare foot. I ran into the bathtub and screamed until my roommate came out. We looked for the thing, but there was no hole or space in the walls.

A boy for a man’s job

“We called the landlord, who several days later sent over his hatchet man with traps from a hardware store. He laid one trap, a plastic rectangle covered in glue, behind the stove. We found it the next morning with little footprints all over the glue. We called the landlord again, who sent another guy with more over-the-counter traps. I began sleeping under my desk at the office.

“Eventually the landlord called an exterminator with bigger and stronger glue traps. More important, he discovered the rats’ passageway into our apartment: a tunnel dug from God knows where into the water heater closet that was built into the wall between the kitchen and bathroom. The exterminator laid down traps beneath the hole, and sure enough we start finding rats caught in the industrial-glue traps.

“The landlord deigned to send a man to remodel, which is what the exterminator suggested, because it’s the only way to divorce yourself from vermin once a brood decides to nest in your house. These Godless monsters proceed to breed in the walls until night, when they eat whatever’s in your pantry. Picking them off one by one accomplishes nothing; to destroy them you must find the mouth of their tunnel, fill the inner passage with as much poison and steel wool as possible, and pump the tunnel full of cement mix. After the cement dries, plaster the thing shut.

“Our rat problem was over until spring, when the heat reanimated the frozen carcasses laid throughout the walls, at which point a horrible effluvium wafted through the apartment for several weeks. I learned that when it comes to violating health laws, landlords will do nothing the least bit expensive until making all their other half-assed attempts.”

Send us your tales of dealing with rats, mice, roaches, bad landlords and other vermin.