Woodlawn needs its community gardens as much as the new condos 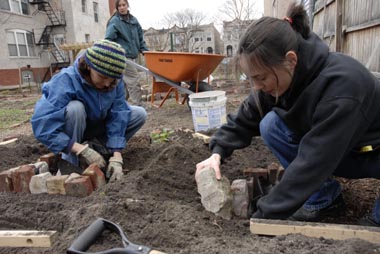 We’ve mentioned that neighborhoods like Woodlawn are marred by vacant lots. The lots have mostly been vacant since the 1960s, when building owners abandoned their properties and fled the city for the suburbs, often torching their six-flats in order to collect the insurance money.
In some parts of Woodlawn, residents have reclaimed the plots of land and put them to good use, growing vegetables, herbs and flowers. The gardens also provide an outlet for socializing and catching up with neighborhood gossip. They play a particularly important role in Woodlawn, which is bereft of the usual community venues – cafes, bars and shopping centers – where neighbors meet and get to know each other. Pictured is the Brickyard Community Garden, at 6117 S Woodlawn Ave.
Many of these lots are now owned by the city and are available for developers to buy. We think that condo development is helping to transform Woodlawn for the better, but we hope the community gardens aren’t bulldozed to make way for new six-flats.