A Loopy good time at the McCormick Tribune Ice Rink 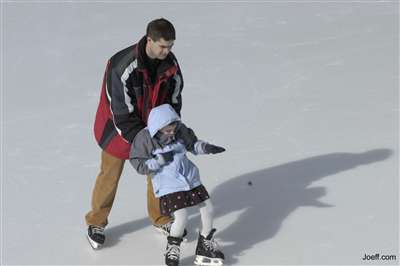 Yo’s truly spent yesterday afternoon at the McCormick Tribune Ice Rink in Millennium Park, a place which feels like its own little world, a world where six-year-old skating prodigies are at the top of the social order. They whizz past young men with baggy pants and too-cool-for-school attitudes and beginners nervously clutching the rail.

Yo’s truly skates so infrequently that I normally join the ranks of the rail clutchers for the first couple of revolutions. In fact, I planned on staying there until Cher’s “Believe” came blasting out of the loudspeakers, forcing me to seek refuge in the center of the rink. I’d like to say that I took time to admire the view of The Heritage at Millennium Park and 340 on the Park (which looks almost finished) but I was too preoccupied with the treacherous ice to notice them. Joeff Davis took this photo of another beginner last year for New Homes Magazine.