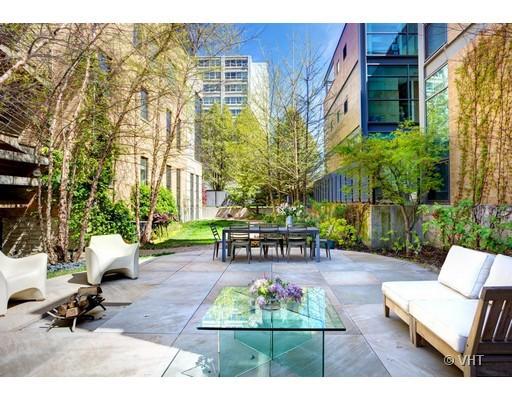 Twenty-five years ago you could have bought the equivalent of several square blocks of the western part of Old Town for unpaid taxes totaling less than $100K. In the interim, the area bounded by Sedgwick, Division, North and Larrabee has been almost completely transformed.

Chicago-based MCL Companies spurred development of the area in the mid-90s when it acquired the 10-acre site of a shuttered Oscar Mayer plant and transformed it into Old Town Village, a development of luxury single-family homes. The CHA’s announcement of plans for the demolition of the Cabrini-Green high-rises – and their eventual demolition – contributed mightily to the neighborhood’s redevelopment.

Major projects gave infill developers and individual homeowners the confidence to build a wide array of luxury single-family homes in the area.

The most distinctive feature of the home is its outdoor space, which includes an enclosed suburban-sized yard with a bluestone patio and a roof deck with outstanding skyline views.