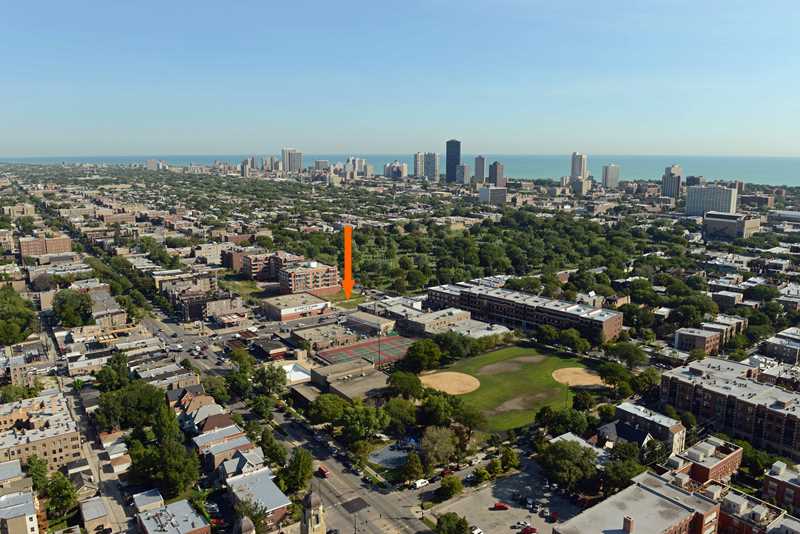 News about new developments surfaces in many venues. On April 12th, the Facebook page for 47th Ward Alderman Ameya Pawar announced a proposed development at the northwest corner of Clark and Lawrence, a site that’s been vacant for more than half a dozen years.

The site is zoned B2-3, which would allow a mixed-use retail / residential development with a square footage equal to three times the lot area. According to Ald. Pawar’s Facebook page, Candea Development is proposing ground-floor retail with residences above.

Ald. Pawar credited the new Mariano’s and McPherson Elementary School as factors that “helped us secure this new project.” The Mariano’s has created a lot of local excitement. McPherson has its enthusiasts, but its test scores haven’t ranked it among the higher-performing neighborhood schools.

Two developments immediately adjacent to the Clark and Lawrence site have seen strong sales. Forty units sold fairly quickly at the 4846 Clark condos and the Backyard Andersonville townhomes are nearing a sellout. Condos in the 4700 block of Clark Street have sold recently for more than $400K.

The location has a number strengths, including equidistance from Red Line and Metra stops, the expansion of the Andersonville scene toward Lawrence and proximity to Chase Park, a half-block to the south. The popular park has an outdoor pool, tennis courts, ball fields, a newer playground, a running track and a field house.

We visited Chase Park a year ago for an Easter Egg hunt that drew a crowd.

According to Ald. Pawar, Candea Development will be building the new project.