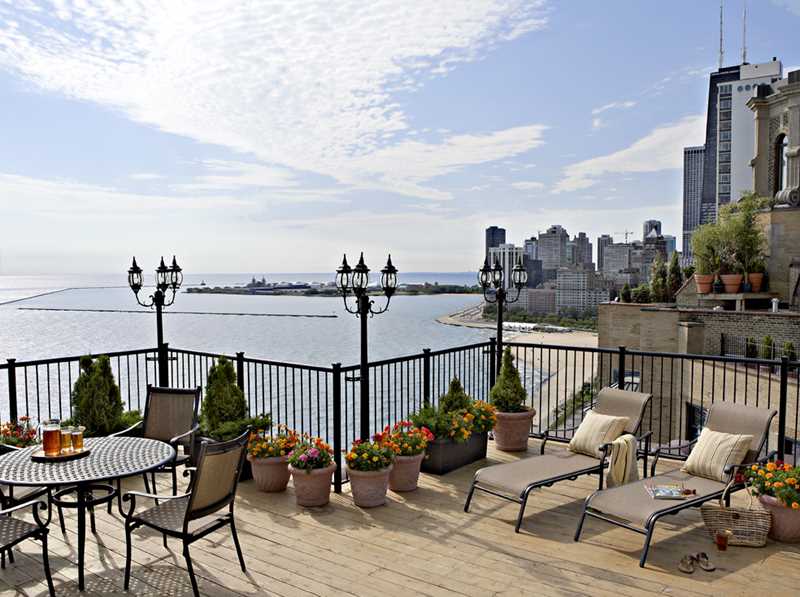 Gutting a 1920s high-rise can be a little like plunging your hand into an elaborate wedding cake. The architectural detail for which the era is celebrated gets destroyed if developers don’t strive to preserve it.

RDM Development was well aware of this fact when it bought 1400 Lake Shore Drive, a 22-story Gold Coast tower with numerous details worth preserving. Intricate metal grilles, hand-painted ceilings, walnut paneling, limestone floors and chandeliers are among the features that landed the building’s lobby on the National Register of Historic Places. Its limestone façade is typical of the Gold Coast, a nationally landmarked district.

The structure has undergone several makeovers since it was built in 1927 by the Wrigley family. Intended as a hotel, it instead became a co-op building and maintained that form of ownership until the 1950s, when it was de-converted into rental apartments. The building is being converted once again as RDM Development transforms its apartments into 398 condos ranging from studios to three-bedrooms.

In upgrading the units and common spaces, RDM was committed to preserving the classical style, says Corey Zussman, an in-house architect with RDM who worked on the rehab with a team of designers.

The elevators are a case in point. Zussman guessed that the most recent renovation had taken place in the ’60s: the walls were covered in plastic laminate and the ceilings were mirrored. RDM replaced these finishes with wood paneling reminiscent of the ’20s.

The developer made similar changes throughout the common spaces, installing wood paneling, cleaning the existing French walnut panels and Italian fresco ceilings, and redecorating the hallways. “We tried to bring it back to its original character,” Zussman says.

A series of new building amenities came with the renovations. An entrance was created on East Schiller Street, featuring a new landscaped plaza, and the building’s infrastructure was updated with new building-wide plumbing, electrical systems and water heaters.

In the basement space, RDM built a fitness center, a community room and a media lounge. The company pumped $500,000 into the 2,500-square-foot fitness center, spending $100,000 on exercise equipment alone. Boxing, yoga and ballet barre classes will be held in the community room, which has a granite bar and a full kitchen with stainless steel appliances.

In a nod to the building’s past, the hallway leading to the fitness center is decorated with vintage sports posters from the 1920s and 1930s.

The developer also made major improvements to an existing 1,000-square-foot rooftop deck. It’s now a multi-level 2,500-square-foot space with landscaping, seating, grills, custom lighting and unobstructed views of the city.

“The roof deck at 1400 Lake Shore Drive is quite simply one of the city’s true gems,” says Robert Mosky, chairman and CEO of RDM. “The views are the best you’ll find anywhere, and the new design evokes the feeling of a fine European resort.”

RDM spent $20 million renovating the property’s common areas. Another $15 million was spent on renovations to individual units, according to Michael Ansani, president of RDM.

“I think more than anything, we looked at the beauty of the building, the vintage classic building that it is, and chose to enhance the existing structure to meet the needs of today’s buyers,”Ansani says. “We felt that by enhancing the property, we were going to be adding value to the building – and bringing additional value to our buyers.”

In early August, the project was about 70 percent sold, and prices ranged from the $140s to the $590s, according to Ansani. The units are available in 19 floor plans, from studios to condos with three bedrooms and two bathrooms. Delivery is immediate unless buyers want upgrades, in which case they typically close three to four months from the time they sign contracts.

The renovation is 98 percent complete, Ansani says, and the group is now working on renovating a ground-floor retail space.