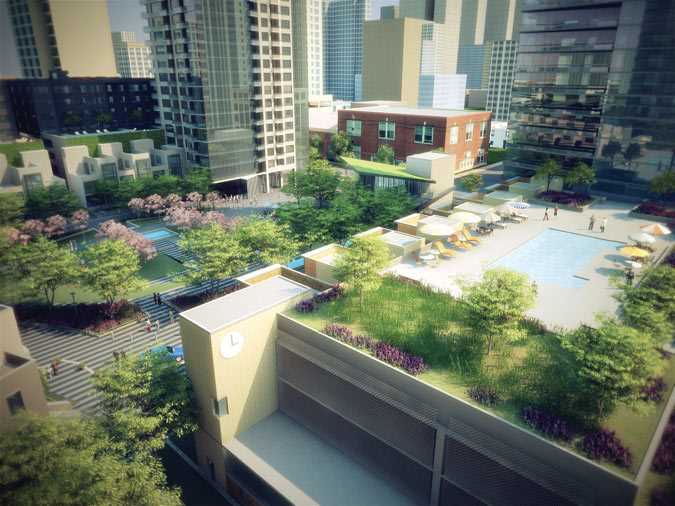 The ambitious plan for Atrium Village has taken a step forward with the filing of a Planned Development application with the city. Plans for the 7-acre site call for a five-phase development with 1,673 residences and retail space in 8- to 44-story buildings totaling more than 2,000,000 square feet.

When Atrium Village opened in 1977, the vast seven acre site between Wells and Orleans, Hill and Division streets marked the realization of a vision by four Chicago churches – that people of different incomes and ethnicities could live together harmoniously. Today, the Atrium Village development team introduced the ‘Planned Development’ application to the City of Chicago to transform their site into a ‘21st Century’ development.

Built by a consortium of Chicago churches who served the near north side community – LaSalle Street, Holy Family Lutheran, St. Matthew United Methodist and Fourth Presbyterian – in partnership with developers Crane Construction Company Inc. and Security Properties Inc., Atrium Village has anchored the community and stood as a model of best housing practices for the nation.

Over the next decade, as envisioned by the partnership, the low rise, low density, gated community will be rebuilt to be a LEED-certified, transit-oriented, mixed-income, mixed-use development – one that reflects the changes in the neighborhood, the city and best housing practices that have evolved over the past four decades.
When complete, the new Atrium Village will be anchored by four high-rise buildings that will define the corners of the property, where on the Orleans side, the tallest building is set back from the elevated tracks to accommodate a potential transit stop at some point in the future. The new development will surround a public 2-acre terraced park, complete with water features, sitting areas, walking paths, a ring of townhomes at its perimeter and a free standing low scale building designed for a restaurant.

Building on a Chicago tradition, the first floor of the Division Street buildings will harbor a boutique fresh food market and other retail offerings that are needed in the neighborhood. The current Bright Horizons School will be relocated to a newly-constructed building on Hill Street to allow for safe play space and easy drop-off and pick-up of children who attend the center.

Staying true to the original mission, 20% of the apartments in the new complex will be income restricted which will provide much needed workforce housing close to transit and employment centers.

“When Atrium Village was first built we were just about the only residential entity around,” said Chuck Infelt, Pastor Emeritus, Holy Family Lutheran Church, one of the four partner churches. “Today, we are surrounded by numerous residential developments filled with old and young people who are attracted to the vitality of the area. Just as we wanted to serve the community in 1970s when planning began, we want to meet the needs of our community today.”

Jeffrey D. Crane of Crane Construction Company Inc explained that as is often the case, necessity became the mother of invention. “Approximately five years ago we became painfully aware of the need for change. The property is aging and really not configured to the needs of today’s individuals or families. It was both a challenge and an opportunity. Our plan not only right-sizes the development to fit in with the neighborhood, but we have the opportunity to both use the superior materials and energy systems of today in addition to adding the amenities that today’s renters look for and demand – wifi, washers and dryers in the apartment, dishwashers, work out rooms, media rooms, business centers and the like.”

John Marasco, Chief Development Officer of Security Properties Inc said the residents’ reaction to the proposed redevelopment was rewarding. “This has always been a tight-knit community with a common purpose and interest with the ownership. We were delighted that the residents are excited about the change and are eager to have an opportunity to become residents of the new buildings. Our goal is not only to revitalize Atrium Village but ensure that it remains a model for the nation – of what great urban housing developments can be.”

In charge of bringing the Atrium Village vision to fruition is the project’s design team, made up of FitzGerald Associates Architects of Chicago, Bumgardner Architectsof Seattle and Hitchcock Design Group of Naperville. Plans for the dynamic mixed use community came out of extensive collaboration between the three firms and the development team to create a compelling plan designed to be built in several phases with minimal disruption to existing tenants.