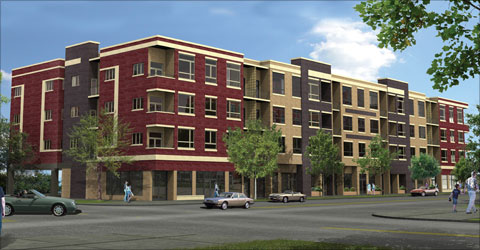 Deva Development is planning a row of condos and shops along Diversey Avenue, in the far Northwest Side neighborhood of Montclare. Bella Point Condomiums will comprise five buildings, each housing 12 condos and one ground-floor retail space, according to Deva President Andy Stump.

The site, at 6604 – 6620 W Diversey Ave, is just to the west of Brickyard Mall. In the late ‘90s, the mall went into a steep decline (you can read a sort of eulogy on the Web site DeadMalls.com). But the mall has been redeveloped in the last several years and is now home to thriving big-box retailers such as Target, Lowe’s Home Improvement Center and Office Max.

Bella Point’s retail tenants may benefit from the mall traffic, Stump said, and the condo owners will have ample shopping close at hand.

The five buildings, designed by M3 Architectural Consulting, are in yellow, brown and red brick. “We didn’t want a solid block that looked like all one building,” Stump said. “We varied the brick and did some stepping in and out that dressed the building up a bit.”

The condos will have one or two bedrooms and one or two bathrooms, with prices ranging from the $190s to the $270s, including parking. Each unit will have a balcony, and the buildings will have common rooftop decks and elevators.

Stump said he’s currently awaiting a permit from the city but expects to start construction in October. The first building will likely start delivering units in December 2008, he said.

Newer Post
British School steaming ahead on Halsted
Older Post
Ripped from the headlines: high-end developments may feel the squeeze