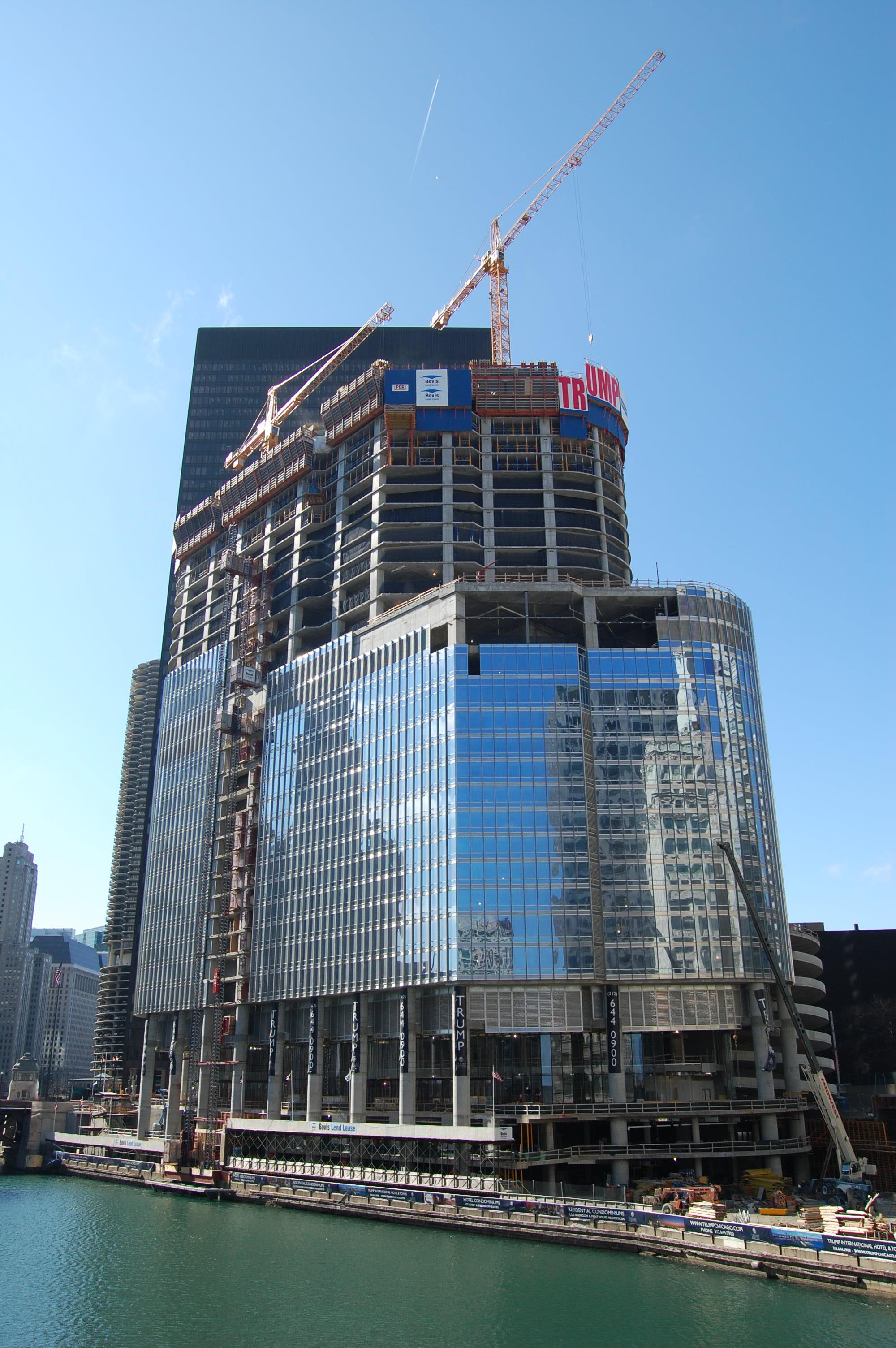 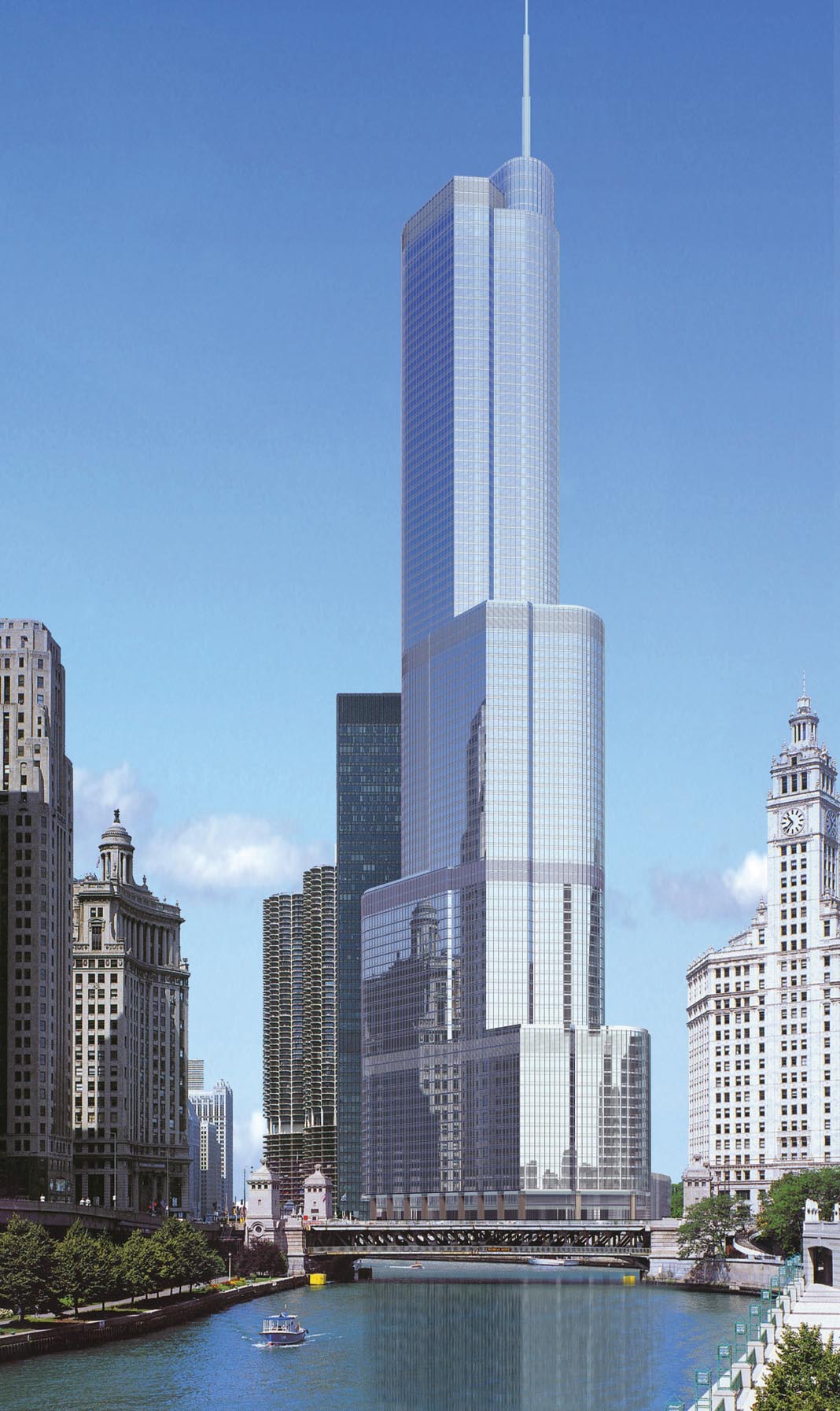 An awed “whoa” was Dana Sindha’s gut reaction to Trump International Hotel & Tower, under construction at 401 N. Wabash Ave. in River North. The 27-year-old medical student was visiting from her home in Ohio for the first time in five years. The last time she was here, the squat, metallic Sun-Times building blighted this prominent spot on the Chicago River. “This looks like it’s going to be pretty awesome. I love the blue,” she said quickly, the sharp breeze off the river hustling her along.

Even on a wintry day, it’s hard for tourists walking the Magnificent Mile and lifelong Chicagoans alike not to stop to witness the drama of a major skyscraper underway.

“Ultimately, this 92-story tower with this amazing glass faÃ§ade will be an iconic image in this city,” says Tere Proctor, the Koenig & Strey GMAC Real Estate agent leading sales at Trump Tower. “The presence of this tower is already being experienced by the neighborhood and anybody who happens by the site.”

You’d never mistake the building, festooned from top to bottom with banners bearing only the word “Trump,” for anything other than the brainchild of real estate mogul Donald Trump, and that, Proctor says, is the point.

“A big part of our success is the Trump brand, which really brings an identity to the building,” she says. “People know that it’s associated with high-end luxury and quality.” Buyers outside of Chicago have purchased units over the phone, Proctor says, because of the trust they have in the developer. “They know if it’s Trump, it has to be good.”

“Good” may be an understatement. As Trump himself might say, it’s gonna be huge.

The tower, which according to Proctor will have the greatest number of residential units of any single residential building in the U.S., has 472 condos and 286 hotel condos all with access to five-star hotel amenities, including maid service, in-house spa services, catering, and round-the-clock room service and concierge staff. Thirty-thousand square feet of health club space includes more than a dozen spa treatment rooms.

A deck on the 16th floor will provide outdoor dining space for one of the building’s restaurants, and the hotel’s grand ballroom has 30-foot ceiling heights and views of the lake. The residential lobby will have 35-foot ceiling heights, stone floors, wood-paneled walls and dramatic chandeliers. “Everything is on the grand scale,” Proctor said.

Sales at Trump Tower, which, at press time, had reached 80 percent in the residential condo portion of the project and 78 percent in the hotel condo, have been driven by luxury-seeking Baby Boomers, Proctor says. “They can afford anyplace. They can live anywhere they want. Why do they spend anywhere from $1,000 to $1,600 a square foot in this building?” she asks. “Because they want the best.”

And the best is still available, Proctor says. “We’ve sold the equivalent of two buildings already, and there’s a perception that all the good stuff is gone, but we’ve still got water views – we’ve still got the best of everything.”

While Trump Tower won’t have the famous observation decks enjoyed by the Sears Tower and Hancock Center, the monumental structure will still have plenty to offer those who can’t afford an address there. “We’ve created an environment at the base of this building that I think will be a tremendous addition to the city,” Proctor says. “I see it as a destination.”

Situated a block off Michigan Avenue and a bridge away from the Loop, Trump Tower will sit on a 1.2-acre stretch of park space created on the bank of the river. Around 90,000 square feet of retail space, dominated by high-end shops and restaurants, will front the water.

Residential condos at Trump Tower range from studios to five-bedroom units, priced from the $580s to $9.6 million for a 6,850-square-foot penthouse with 16-foot ceiling heights and panoramic views. Studio to two-bedroom hotel condos are priced from the $850s to $3.6 million.
Owners purchase these deeded units just as they would traditional condos, but they have the option of including them in the rental program of suites at the Trump-managed hotel. Owners share in hotel operational fees and in revenue when hotel guests rent their units.

Unlike at some other hotel condo projects, Trump places no limits on how long hotel condo owners can remain in residence each year, and the developer will not retain ownership of any hotel condos. This guarantees that buyers are never in competition with the developer when it comes to leasing hotel rooms.

Construction on the tower had reached the 26th floor in the second week of March, and the hotel portion of the building was scheduled to open in December 2007. First residential deliveries are planned for April 2008.