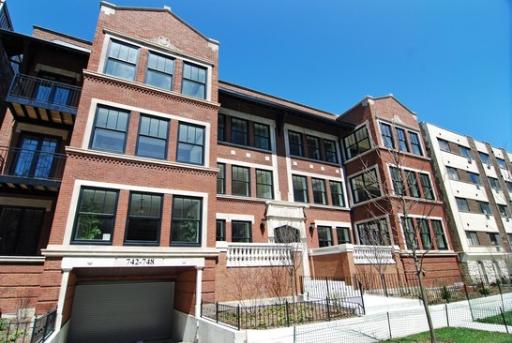 On the surface, Buena Estates, which is located at 742 – 748 W Buena Ave, doesn’t look all that different from the other vintage conversions in Uptown and Buena Park. However, when it comes to pricing, it’s in a whole different league.

Most of the new-construction and conversion developments in Uptown and Buena Park that are listed in the NewHomeNotebook database have one- to three-bedroom condos that are priced from the low $200s to the mid-$400s. Buena Estates, by contrast, has six four-bedroom / 3.5-bath condos that have 3,500 to 3,800 square feet of space, according to the listings, and are priced from the $990s to $1.19 million.

That price range is significantly lower than the $1.27 to $1.3 million range quoted by Chicago magazine‘s Dennis Rodkin in his January write-up about the development. According to Rodkin’s column, Aidan Development constructed a new steel substructure to support the building, enabling them to build an underground garage.

Now, Rubloff has listings for three condos, and there are also MLS listings for two four-bedroom / three-bath rental units, which lease for $5,400 per month. All of the homes – rental and for-sale – come with two parking spaces, according to the listings. The development is located less than a block from Lake Shore Drive, and there’s a tunnel at the end of Buena, which will take you to the lakefront and Montrose Harbor.