Checking in with the Lincoln Park Lofts 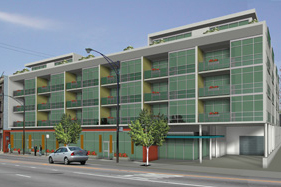 A few weeks ago, we learned that this residential building at 1610 W Fullerton Ave in Lincoln Park, formerly known as the Ashton Lofts, was on the market again under the management of Bank of America. The project is now known as Lincoln Park Lofts, and Jameson Real Estate is handling sales for the 24 unsold homes.

Earlier this month, Jameson agent Lindsey Delrahim told Joe that most of the homes would be ready for immediate delivery, so I drove by the last week to see how the building was looking.

It’s been about two years since construction workers left the scene, but from the looks of some of the weathering that can be seen on the exterior, it looks as though it has been sitting there for much longer. At the entrance to the garage, some unpainted plywood is exposed to the elements, and some metal and black coating remains where it was torn off. An old Baird & Warner Ashton Lofts banner still hangs on the top floor, hiding some of the cinder blocks, which have seen better days.

The condos are being sold at prices that are 30 percent below market rates, according to the development page on the Jameson Web site, but it looks like there’s work to be done before these remaining homes will sell.