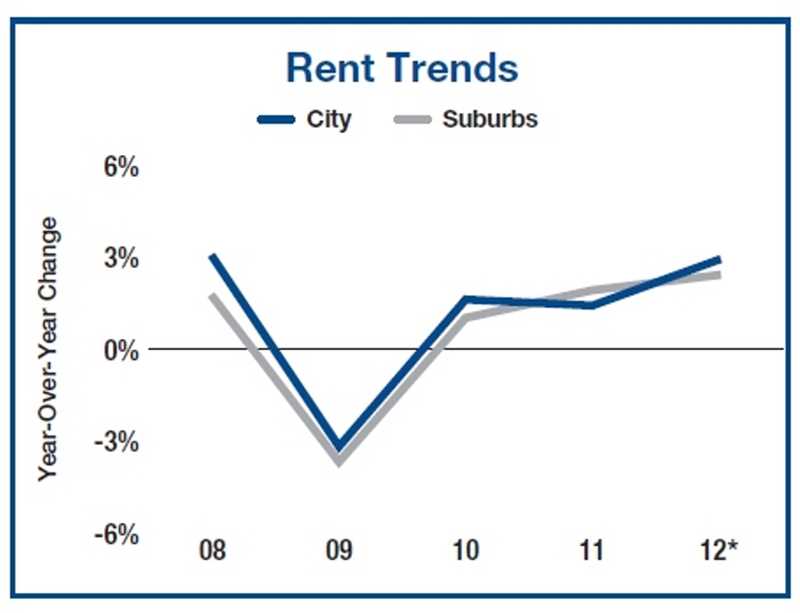 Here are some of the highlights for the City of Chicago:

More projects are under way, but few have yet to come online. In the past 12 months, 166 market-rate rentals were delivered in the city. The total includes 48 units during the first two quarters this year.

An additional 4,600 units are under construction in the city, including more than 800 units slated for delivery in the second half of 2012. Planned market rate projects total nearly 15,000 units, representing a potential 9 percent increase in inventory if all the properties advance to completion. About 2,900 rentals are planned in the City West submarket, but high-demand Lincoln Park has fewer than 300 apartments under consideration.

Outlook: In 2012, developers will complete 900 market-rate rentals in the city, expanding inventory 0.5 percent. Only 118 units were completed in 2011, but 6,000 units were brought online in the preceding three years.

Vacancy fell for the 13th consecutive quarter, falling 30 basis points to 4.4 percent in the April-to-June period. In the first half, vacancy receded 40 basis points, slowing from a plunge of 70 basis points in the preceding six months.

Outlook: Vacancy will decline 50 basis points to 4.3 percent this year, after a drop of 120 basis points in 2011. Asking rents will rise 2.9 percent, accompanied by a 4.0 percent jump in effective rents.