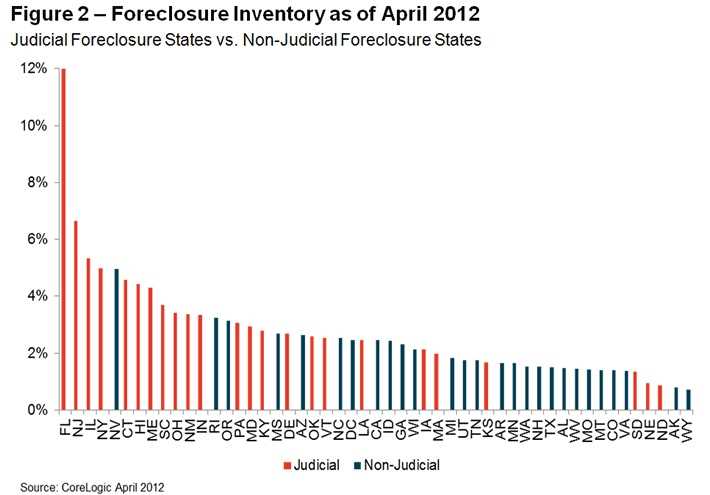 According to CoreLogic, Illinois (5.3%) ranked third among the five states with the highest foreclosure inventory as a percentage of all mortgaged homes, trailing Florida (12.0%) and New Jersey (6.7%), and ahead of New York (5.0%) and Nevada (5.0%).

Chicago, at 6.3%, had the fourth-highest foreclosure inventory among 25 large metro areas, trailing Tampa – St Petersburg (12.4%), Orlando (12.3%) and Nassau-Suffolk NY (6.8%). Chicago’s foreclosure inventory percentage rose 0.5% over the previous April. One of every 79 Chicago-area mortgages resulted in a completed foreclosure during the 12 months ending April 2012, for a total of 15,556 foreclosures.

CoreLogic explains its terminology as follows:

The foreclosure inventory represents the number and share of mortgaged homes that have been placed into the process of foreclosure by the mortgage servicer. Mortgage servicers start the foreclosure process when the mortgage reaches a specific level of serious delinquency as dictated by the investor for the mortgage loan. Serious delinquency is typically defined as 90, 120, or 150 days delinquent (sometimes more), in foreclosure or in REO. Once a foreclosure is “started,” and absent the borrower paying all amounts necessary to halt the foreclosure, the home remains in foreclosure until the completed foreclosure results in the sale to a third party at auction or the home enters the lender’s REO inventory.The data in this report accounts for only first liens against a property and does not include secondary liens. The foreclosure inventory is measured only against homes that have an outstanding mortgage. Homes with no mortgage liens can never be in foreclosure and are therefore excluded from the analysis. Approximately one-third of homes nationally are owned outright and do not have a mortgage. CoreLogic has approximately 85 percent coverage of U.S. foreclosure data.