Chicago part of 1st drop in median home prices since 1950? 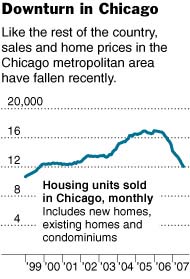 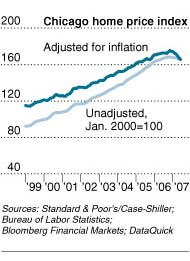 Normally, residents of the Second City are thrilled with a mention in The New York Times or The Wall Street Journal – makes us feel validated somehow – but the sort of attention we received in a story about the housing market in yesterday’s Times probably made many a new homeowner here just a little queasy.

The story was about an expected drop in the median price of American homes this year – for the first time since federal housing agencies began tracking this info in 1950. Boom-bust cycles tend to hit the coasts harder, but Chicago was highlighted as one of the towns that would not avoid the fall.

The story and the accompanying graphics above paint a picture that’s glum if not grim. Chicago prices peaked in September 2006 and have since dropped 1.7 percent, according to the S&P/Case-Shiller Home-Price Indices, calculated by market research firm MacroMarkets.

The news of falling prices might cheer homebuyers, though according to some analysts, the downward trend could continue into 2008 and 2009.