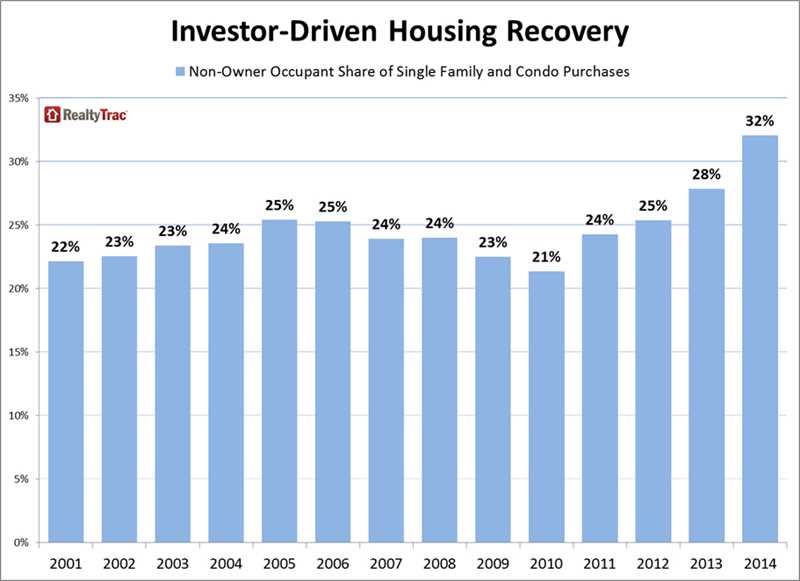 RealtyTrac just released its October 2014 Residential & Foreclosure Sales Report. According to the report:

… the median sales price of U.S. single family homes and condos in October was $193,000, up 2 percent from the previous month and up 16 percent from a year ago to the highest level since September 2008 — a 73-month high.
…
“This U.S. recovery is largely being driven by investors, and as the lower-priced, often distressed inventory most appealing to investors dries up in a given market, investor activity will slow down in that market and move to other markets with more ideal inventory available,” said Daren Blomquist, vice president at RealtyTrac. “This has created a ripple-effect recovery moving out from traditional investor hot spots such as Phoenix, Atlanta and many California markets and into markets such as Charlotte, Columbus, Ohio, Dallas and Oklahoma City.

“More than 32 percent of all single family homes and condos purchased so far in 2014 are non-owner occupied compared to 68 percent that are owner-occupied,” Blomquist added. “That is the highest share of investor purchases since we began tracking in 2001.”
…
Among metro areas with a population of 500,000 or more and sufficient home price data, those with the biggest annual increase in median sales price were Toledo, Ohio (up 33 percent), Detroit (up 27 percent), Cleveland (up 21 percent), McAllen-Edinburg-Mission, Texas (up 21 percent), and Dayton, Ohio (up 20 percent).

Newer Post
A day for humbly giving thanks, and sharing
Older Post
A Streeterville convertible with a great layout