Every year, New Homes takes a step back and surveys the new-construction and rehab landscape to determine which projects represent the cream of the housing crop. We’ve singled out six projects, ranging from a townhouse development on the Northwest Side to a super-luxury high-rise near the Gold Coast, as our favorites from 2008.

This time around, we chose to focus solely on projects where construction has already begun, and where homes are either ready for occupancy or on pace to delivering in 2009.

Best high-rise (20 stories or higher): One Museum Park
It’s rare when a tower actually lives up to the grace of its early renderings, so we’re not ashamed to admit that The Enterprise Companies’ One Museum Park, nearing completion at 1215 S Prairie Ave in the South Loop’s Central Station mega-development, has exceeded our expectations.

Pappageorge / Haymes isn’t an architectural firm known for its daring concepts, which makes the successful execution of their rocket-shaped design all the more impressive. Jeff Renterghen, a senior associate at Pappageorge / Haymes, told New Homes in August that the firm “pushed for a more modern statement” with One Museum Park, crafting a soaring column of steely blue glass with wing-like flanges, unlike anything else seen in the South Loop.

One Museum Park’s crescent-shaped plan of the building ensures that none of the residences have obstructed views to the west; instead, every home will have vistas of Lake Michigan, the sprawling Grant Park and its museum campus, and Chicago’s magnificent skyline. As Renterghen says, “There’s really no ‘back’ to the building, and no ‘bad’ units.”

More than 70 percent of One Museum Park’s 298 units have sold, and the remaining stock is spread evenly throughout the tower, says Ralph Oliva of Coldwell Banker Residential Brokerage. Two-bedrooms on its lower floors start in the $500s and three-bedrooms start around $1 million. The largest available unit, a 3,000 square-foot three-bedroom, is priced at $1.8 million, he says.

Best high-rise (Less than 20 stories): Mondial
In a neighborhood of townhouses and industrial lofts, Mondial, the new 15-story high-rise at 900 W Huron St has an arresting presence. Since most of the nearby buildings have fewer than 10 stories, its size certainly works in its favor, especially when it comes to the views.

Beginning with a 36-foot wide by 96-foot tall entranceway off Huron Street that leads residents to glass-backed elevators, Mondial has a taste for the dramatic. Architect and developer Jack Berger says his initial design, which was rejected by the city, called for a 30-story tower, but he is pleased with the shorter building.

“Most of the designs you see are very deep, because that way you can get the most number of units on the perimeter,” Berger says. “We did just the opposite. Here, everything we did was linear, so that all the light was on the exterior wall.”

Unlike many of Chicago’s new residential high-rises that are heavy on glass, the exterior of the modernist building will be a fairly even mix of glass and cement, with two-tone gray cement walls, aluminum thermo-break windows and balconies that will be fitted with Sterling Dula glass railings.

Mondial was topped off in early September and is moving towards first deliveries by the end of 2008. When complete, the building will comprise 142 one- to four-bedroom condos that are priced from the $230s to the $990s. 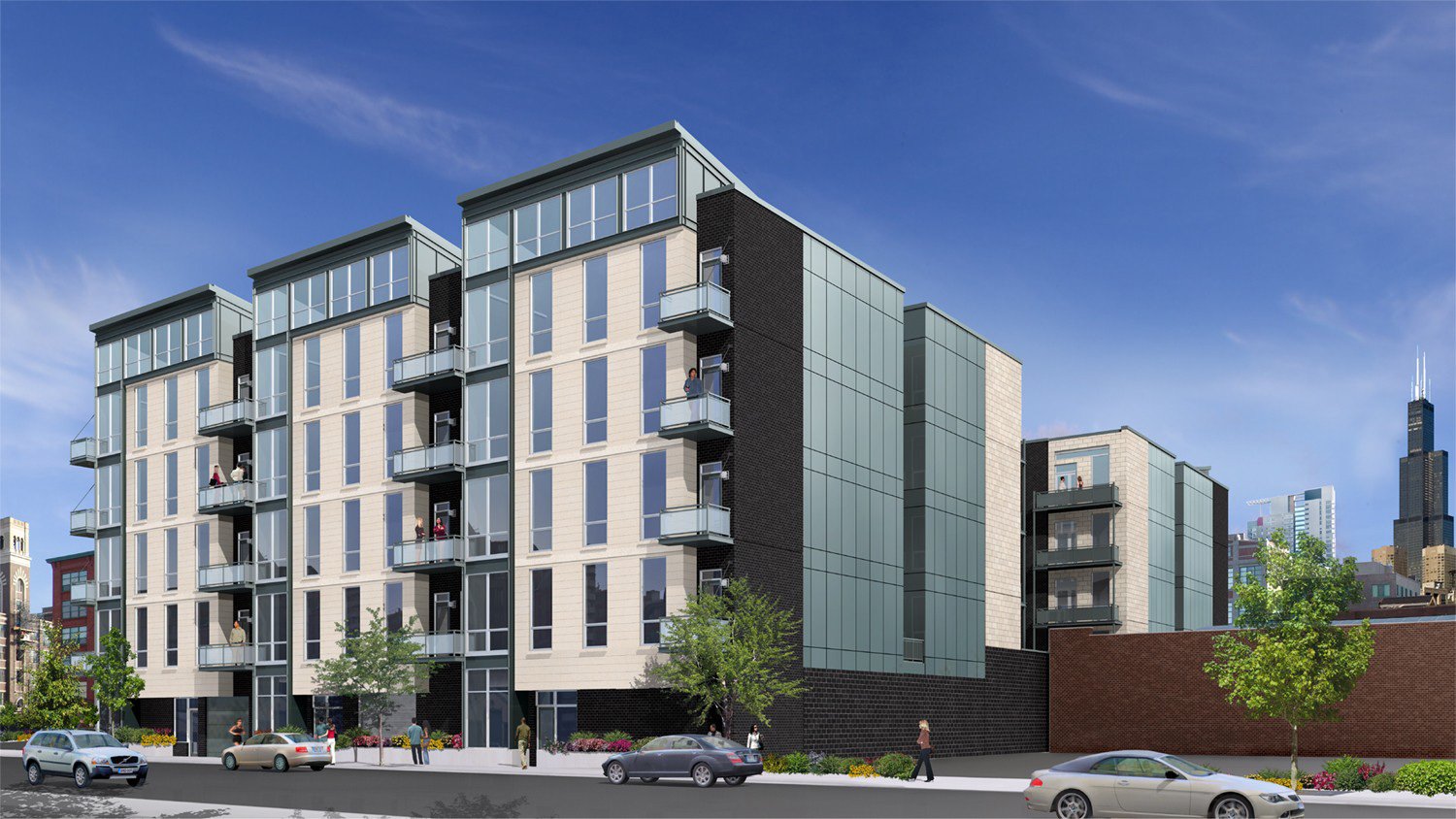 Best mid-rise: CA23
Chicago’s West Loop was one of the biggest beneficiaries of the city’s boom in residential real-estate development. Hundreds of new condos came onto the market in that neighborhood in 2007 and 2008, but the vast majority of them were small and medium-size homes, leaving few options for families in need of a little more space.

Enter CA23, The Brixton Group’s 48-unit mid-rise that’s currently under construction at 23 N Aberdeen St. With floor plans that start at 1,900 and range up to 4,000 square feet, CA23 will give residents room to spread out and make a new home, without having to worry where everything will fit.

Brixton Group principal and CEO Geoff Ruttenberg says that because of their size, the homes at CA23 will be like townhouses, the only difference being that they will be organized horizontally, instead of vertically. And with prices that run from the $650s to $1.6 million, Ruttenberg says the pricing is consistent with other new condo developments in the neighborhood.

Phase I of CA23 is currently under construction, and construction is expected to wrap up by the end of 2008. Ruttenberg says he hopes to begin work on Phase II by February 2009. 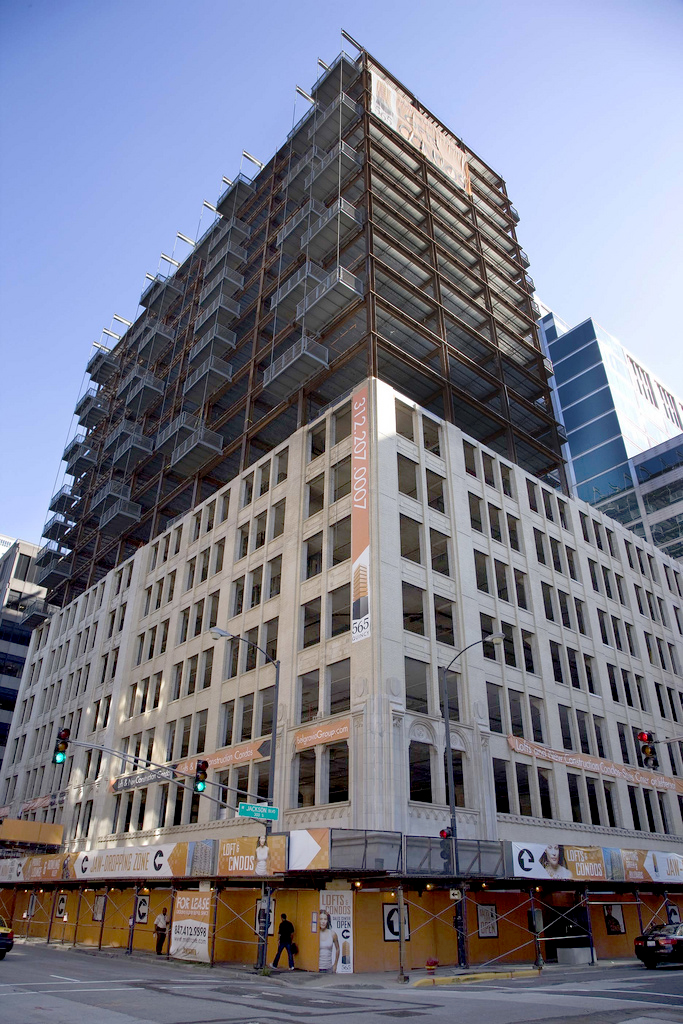 Best lofts: 565 Quincy
The stock of quality loft buildings in Chicago has diminished in recent years, but the past year has seen several potentially successful loft projects emerge throughout the city. We appreciate the ambition of newer projects like Opera Lofts, located on the Near South Side, and the style of Bucktown’s Baer Lofts, but one project stands out right now as the best combination of design and location: Belgravia Group‘s 565 Quincy.

565 Quincy isn’t exclusively a loft project – Belgravia is also putting up 11 stories of new-construction homes atop the old seven-story industrial building at 565 W Quincy St – but it’s hard to beat the draw of a true concrete loft so close to the Loop. It’s next door (seriously) to Union Station and just a couple blocks from the Blue Line and the Kennedy and Eisenhower expressways, ensuring that buyers will never have trouble getting around (or out of) town.

The lofts range from one-bedrooms with more than 800 square feet, priced in the mid $200s, to two-bedrooms with almost 1,300 square feet, priced in the $440s. They all have 11-foot ceiling heights, hardwood floors, granite and marble countertops, stainless-steel appliances, Kohler fixtures, and 18- to 19-foot wide terraces. The building is serviced by a 24-hour door staff, and buyers will have access to an eighth-floor outdoor deck and the basement level “Q Room,” a recreational area with a private bowling alley, movie screening room, putting green, lounge and fitness center.

Best single-families/townhouses: Fletcher Row
The neighborhoods bordering the Chicago River on the city’s North and Northwest sides have become hot spots for townhouse construction in recent years. Last year’s Best Townhouse winner, Cornelia Court, continues to expand and see success, and with good reason: Avondale and its surrounding area has emerged as a family-friendly neighborhood with affordable homes and must-have amenities like stores, restaurants, and easy access to the expressways and CTA’s bus and train routes.

This year, we turn again to the Northwest Side, just outside of Avondale, to another townhouse project, Fletcher Row, located at 2450 W Fletcher St.

Best luxury homes: The Elysian Hotel & Private Residences
It sounds like a contradiction, but for a 60-story skyscraper, The Elysian Hotel and Private Residences tends to keep a low profile. In fact, the most attention the luxury hotel tower has drawn was when it was announced in 2007 that Chicago’s most vaunted chef, Charlie Trotter, would open two restaurants in the River North high-rise.

The deal with Trotter, who will open a casual restaurant and a dinner-only spot in the tower, only adds to Elysian’s exclusive aura, as the four-star chef is notorious for spurning suitors.

Trotter won’t be the only star in Elysian’s cast though. Lucien Lagrange, one of the city’s most prolific architects, designed the classical tower; Simeone Deary will oversee interior design, and a Marc Jacobs store will fill part of the retail space at the corner of Rush Street and Walton Place.

Billed as a “throwback to the grand hotels of the 1920’s with the modern conveniences of today,” the Elysian tower does indeed have one foot in the past and one in the present. Among the luxury amities offered at Elysian is Greco-Roman-themed Elysian Spa and Health Club, an upscale Gentlemen’s Barber Shop, and the Lady’s Lounge.

Elysian’s half-floor residences range from 3,400 to 6,400 square feet, and they are priced from $3 million to $5 million, while the smaller hotel condominiums are priced from the $600s to the $950s.