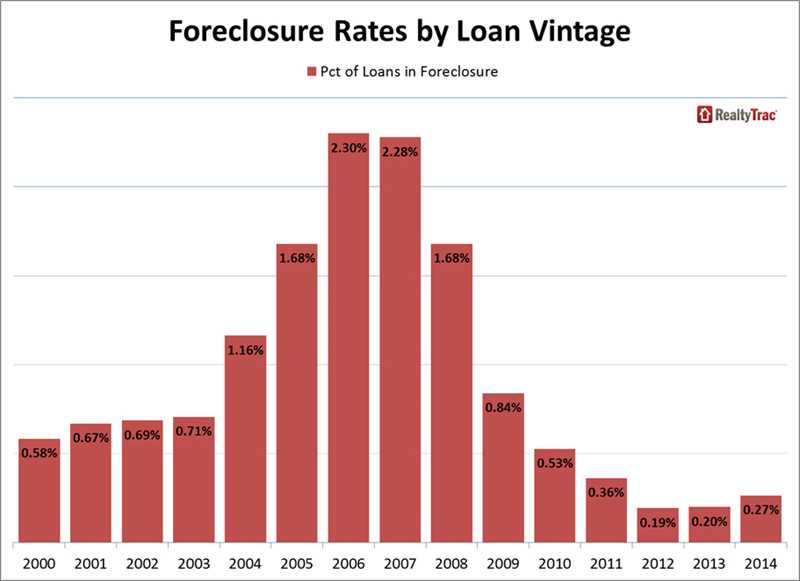 RealtyTrac just released its US Foreclosure Market Report for November 2014, which shows foreclosure filings — default notices, scheduled auctions and bank repossessions — were reported on 112,498 U.S. properties in November, a decrease of 9 percent from the previous month and down 1 percent from a year ago. November was the 50th consecutive month with a year-over-year decrease in overall foreclosure activity. The report also shows one in every 1,170 U.S. housing units with a foreclosure filing during the month.

A total of 55,906 US properties started the foreclosure process in November, a decrease of 1 percent from the previous month but a 6 percent increase from a year ago, the first year-over-year increase following 27 consecutive months of year-over-year decreases.

Five of the nation’s 20 largest metro areas posted year-over-year increases in foreclosure activity: New York (up 71 percent), Houston (up 70 percent), Philadelphia (up 43 percent), Boston (up 27 percent) and Baltimore (up 22 percent).

“The housing market is struggling to find the new normal when it comes to a tolerable level of foreclosure activity in this post-Great Recession economy,” said Daren Blomquist, vice president at RealtyTrac. “Finding that new normal requires striking a balance between too much loan risk, which would result in another housing meltdown, and too little risk, which could result in a stunted recovery.

“Foreclosure rates on 2014-originated loans are actually higher than 2013-originated loans nationwide and in many markets, indicating that lenders are open to a slightly higher level of risk than we’ve seen over the past five years of extremely tight lending standards,” Blomquist continued. “But it’s unlikely that lenders will dial up that risk level too quickly going forward given that many are still dealing with working through a lengthy and messy foreclosure process on risky loans from the last loose lending spree.”