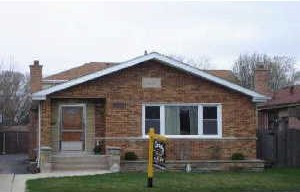 Our series on “city worker specials” drew a few comments that the homes we profiled, which ranged from the $400s to nearly half a million, were too expensive for a Streets & San man or a cop. I’d argue that’s not necessarily the case – these folks get steady raises, often have double-income households and tend to invest for the long haul. And cheaper houses can need so much work that they aren’t really bargains at all.

That said, there are some less expensive “city worker specials” out there. A three-bedroom 1.5-bath single-family home at 3238 W 108th St, described by the listing as a “true ranch,” rings in at $239,900. The roof was replaced six years ago, the furnace is three years old and the air conditioning was new five years ago. It looks to me like a viable starter home for a young family – it has a full basement, and it’s in Mount Greenwood on the far Southwest Side, a relatively safe, stable community.

If you want to stay in the house for the long term, though, you’ll likely have to drop some cash on upgrades or even an addition (say, a second story). And that could run you six figures.