1021 W Bryn Mawr is one of the most recognizable spots in Edgewater. You can’t miss it when you go by. The u-shaped building dates from 1907, was designed in the Tudor Revival style and has a working fountain in the center. It’s pretty grand. According to the AIA Guide to Chicago, it was originally a six-flat made up of units with 12 to 16 rooms, although all have been broken up into smaller apartments, and it was called the Prince of Wales house because it served for a time as the British consul’s residence. [If you look up above the third floor at the base of the U, you will see a shield with the British royal coat of arms and the motto; “Dieu et mon droit.”] 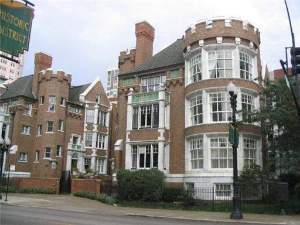 The building is a little schizy — the west half went condo in 1980, but the east half [where this unit is] didn’t convert until the mid-90s, so all the units are different, but they are now all part of one homeowner association. Unit 3C is at the back of the building, on the third floor. It was rehabbed in 1996 and has 2 bedrooms and 2 baths in 1600 square feet. It’s offered at $356,900, by Ann Clements of Realty Chicago. 2005 taxes were $4,450 and there’s a $300 monthly assessment. Of course there’s no parking in the building, but it’s available next door, and according to the listing, the buyer of this unit gets one year free. 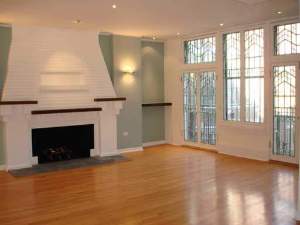 This is a really beautiful apartment at what seems like a great price. The fact that it’s sitting on the market for months speaks more to the way the marketplace — at least at this price point — perceives vintage apartments than to the value or quality here. You cannot beat a place like this for unique space: the bedrooms are more than adequate, and the baths, while completely updated, have a vintage feel. The kitchen is sunny and center-island functional [although some buyers probably look at the perfectly fine white appliances as a deal-breaker. In today’s market, it’s stainless or else, apparently].

The living room is really unlike anything else in Chicago — it’s in what was the billiard room of the original apartment, has a huge, working fireplace and a wall of leaded glass doors and windows facing the courtyard. Oddly, though, the windows on the opposite wall of the unit — facing the building across the alley to the south, which wasn’t built when this went up — were bricked up at some point, which negates the symmetry of the room. But still, it’s an amazing space, and a very cool apartment. Its least appealing aspects are the common areas — I’m guessing the units were sold raw and no attention was paid to the hallways, which look pretty shabby. And I’m sure that there is some resistance to buying a third floor walkup.

The kicker here is that the agent actually owns the apartment [with a partner] and lives in the building! Buying a residence is one of the most difficult choices anyone has to make, but wouldn’t you think that if the person who sold you the property is your neighbor, there is a pretty good chance you’re not going to suffer from buyer’s remorse? Or if you do, that you certainly know where the person responsible for your pain lives. We can think of few better endorsements.

Newer Post
What would West Loop dining be without Greektown?
Older Post
Church of the day: Old Saint Pat's in the West Loop