In the spirit of upholding its sterling reputation for service journalism, Yo wants to give you an idea of what your real estate dollar is worth. [Less and less, as it turns out, but is this really anything new?] What, for example, can you get for half a million dollars in Lincoln Park? We went to a few open houses this weekend to find out.

We should point out that our definition of “Lincoln Park” here [or at least the definition that search engines seem to have adopted] is pretty broad — actually the 60614 zip area. And the brutal reality of the market is that even at $500,000, you aren’t going to find much within a block or two from St Clements. 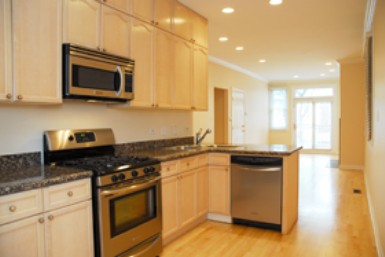 It seems to be on a less than standard width lot, or at least it seems even longer and narrower than the norm for this building type. The living-dining room, which features a tiny terrace (accessible through French doors but probably can only accommodate plants) has a bumped out fireplace which, in a place that narrow, makes furniture placement even more of a challenge. In turn, it is completely contiguous with the kitchen, which — while the cabinets and appliances are nice enough — is not a room as much as an installation along a passageway to the bedrooms, one of which is very tiny and faces a wall. The master is a decent size, with a usable deck, and the baths are nice — like vanilla cream. Blond hardwood floors in the common areas are in good shape.
Downstairs, there’s an enormous open area with another fireplace and a small bedroom and bath at the rear; the floors are carpeted in a white Berber. It’s actually pretty bright as these places go. 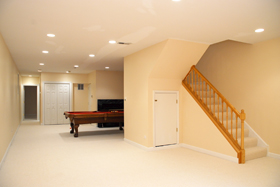 This is a very nice part of the northside, just a block from Jonquil Park, although you really would call it “DePaul” or “Sheffield Neighbors” rather than “Lincoln Park”.

The living/dining/kitchen area is so tight that entertaining would be tough. I think the ideal buyer would be a single parent with a teenager who wouldn’t mind living in the basement if he/she can have it as a private sanctuary.