“Stackable” buildings became ubiquitous on the north side in the mid-1990s the way four-plus-ones did in the 1960s, and although they don’t represent a similar scourge of the streetscape, they’re not exactly what you would call paragons of design excellence. Unit 2 at 2542 N Seminary [click here for a virtual tour] is a pretty typical example of a “middle” unit. It’s got approximately 1400 sq ft of space, with two bedrooms and two baths. 2005 taxes were $5,397. It’s offered by Chip Long of Lakefront Group Realty Associates, and the asking price is $495,000. 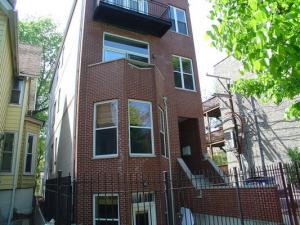 Despite the fact that “charmless” is one of the adjective that often comes to mind when thinking about stackables [particularly the middle — sometimes called “simplex” — units], this one has a lot of charm, which may have something to do with the way the current owners have decorated it, or that it’s on a very leafy and quiet block. Its most distinctive feature is the ceiling height — 10 1/2 feet — which really makes the place feel expansive. And although it dates from way back in 1999, the kitchen — all stainless, granite and maple — feels like a totally tricked-out new construction installation. The baths are nice, but nothing out of the ordinary. The whole place is bright — it’s on the second floor and faces east, south and west. The living/dining area features a fireplace and a usable terrace; there’s a private deck off the master at the back. Closet space is ample, also kind of unusual for a unit like this one. A garage space is included. Overall, it’s sweet, but if you’re looking for lots of space, you may balk. At $353/ sq ft, iit seems price-y for a resale.

Newer Post
The South Loop leads in building, but is that a good thing in this market?
Older Post
Construction update: Citizens State Bank Lofts