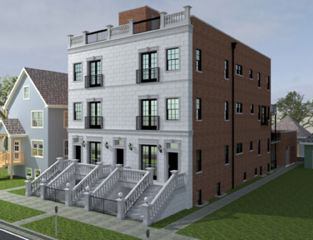 The rendering of Ashland Manor, 2849 N Ashland Ave, that I posted a couple months ago struck me and several readers as somewhat unrealistic. Most commenters took issue with the “lush green grass” shown in the adjacent lot instead of a narrow alley and a couple of plastic siding-clad homes.

A comment from @properties agent Robert Darrow was representative of our gut reactions:

From the photo depicting the bucolic pastoral setting (forgetting Ashland, the 24-hour McD’s drive thru and abutting strip malls) to the insane pricing, it’s like these condos materialized from an alternate universe.

Looking at the rendering alongside a photo I snapped yesterday, the open lot does look misleading, but aren’t most architect’s renderings guilty of similar distortions? Aside from the color and a saggy banner, the “classically-designed” building does look almost exactly as it’s represented in the rendering. Whether that design tickles your fancy is a different story altogether.

All five of Ashland Manor’s condos are still listed on the MLS, with one-bedroom / 1.5-baths priced in the $320s and three-bedroom / three-baths priced from the $640s to $1.09 million. Prudential Preferred Properties‘ Web site says the homes will be ready for delivery within 30 days.