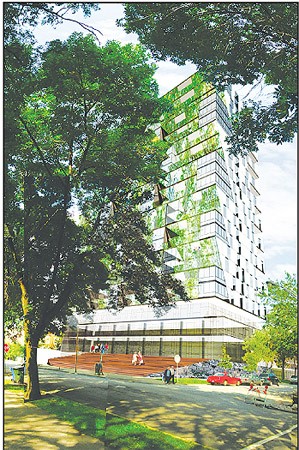 Yo reader The Urban Politician tipped us to the debate happening in Hyde Park over whether a 25-story glass high-rise should be built at the corner of Cornell Avenue and 56th Street. Today’s Hyde Park Herald reports on the October 25th Chicago Plan Commission meeting with community members who, not surprisingly, expressed concerns about the density and contemporary design of the building, which will be developed by New Jersey-based Antheus Capital LLC. The Urban Politician had this to say:

How many projects are NIMBY’s in Hyde Park going to shoot down? There hasn’t been a significant new construction development there in decades. […] A handful of 60 year old ladies who don’t want anything built next to them shouldn’t have the right to hold back that whole neighborhood.

According to the Herald, Antheus purchased the site of the proposed high-rise, tentatively called Windermere West, along with the 12-story Windermere House, a 220-unit rental building, late in September. The Hyde Park Cluster of Interfaith Open Communities plans to meet with Ald. Leslie Hairston (5th) to force Antheus to add affordable housing to its rental stock to offset the market-rate condos that will be sold in the high-rise. More community meetings will be held on the development of the property, which falls under Chicago’s Lakefront Protection Ordinance.