The silence from downtown’s condo high-rise construction sites would be deafening if not for all the noise coming from several new apartment towers. EnV continues to go up next to the Merchandise Mart, the two new K Station towers in the Fulton River District have reached their peaks, Flair Tower at Erie and Franklin streets topped out in mid-September, and Parc Huron at Huron and Kingsbury streets should fly the flag and hoist the tree by the end of October. 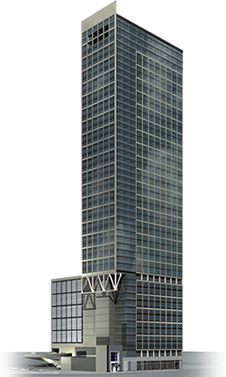 Yesterday afternoon, Jupiter Realty announced a milestone of its own: the 50-story 215 West, located at 215 W Washington St in the Loop, just topped out, moving the project one big step closer to its goal of spring 2010 move-ins.

The 389-unit tower, designed by Solomon Cordwell Buenz, is expected to be the first LEED-certified high-rise apartment building in the Loop. (To be clear, there haven’t been a lot of new apartment high-rises in the Loop to begin with. 215 West is supposedly the first in 15 years.) Its green features will include ENERGY STAR-rated appliances, water-saving plumbing fixtures, and a 23,000 square-foot green roof.

Unit styles will range from studios to three-bedrooms, each featuring granite countertops, in-unit washer / dryer, and floor-to-ceiling windows. Pre-leasing will begin this winter, at which time we should have a run-down of the building’s rates.

View a spreadsheet of 215 West’s features and amenities through Google Docs.