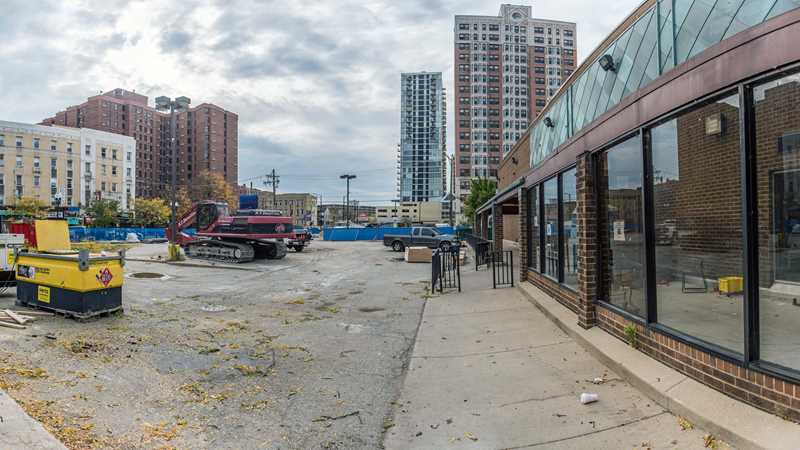 The former Jewel site at Clark and Division was surrounded by construction fencing when I passed by last Friday, so I stopped for a look.

One of the workers on the site informed me that demolition of the Jewel was slated to begin this week. That info was confirmed by a news release from Fifield Companies that arrived in today’s email:

Chicago-based developer Fifield Cos. has started site work on The Sinclair, a 390-unit transit-oriented, mixed-use luxury apartment project in Chicago’s Gold Coast neighborhood expected to deliver in Summer 2017. Demolition of the current site will begin this week.

“As the first luxury rental building approved in the Gold Coast in nearly 30 years, the Sinclair will set a new precedent for rental communities in a neighborhood largely known for high-end condominiums and multi-million dollar single-family homes,” said Randy Fifield, vice chairman of Fifield Cos. “The vast majority of rental units available in the area don’t even come close to what The Sinclair will offer in terms of finishes and amenities. It’s going to be a completely new way of living for Gold Coast renters.”

“To meet the needs of the diverse set of residents that call the Gold Coast home, we have decided to work not just with one single interior designer, but a selection of some of the city’s most respected designers. We want to offer a range of modern, transitional and contemporary model units and unit sizes,” said Fifield. “From young professionals and families to empty nesters and long-time Gold Coast residents, The Sinclair will offer something for everyone. The luxury amenities will be unlike anything else in the area.

According to Fifield, The Sinclair will feature more than 55,000 square feet of indoor amenity space and outdoor decks, including a pool and spa with an adjacent sun terrace, multiple cabanas and grilling kitchens; a state-of-the-art fitness club with a separate yoga studio; a screening room with 7.1 surround sound; demonstration kitchen and party room; Starbucks coffee bar; business center and conference room; and bicycle kitchen, a trademark of Fifield Cos.’ properties, offering residents bicycle storage, supplies, tools and air pumps. The building will also feature a children’s playroom, stocked with toys and games for The Sinclair’s youngest residents.

The building will also include a 55,000-square-foot Flagship store for Jewel-Osco and will also feature a new Clark/Division Red Line entrance on LaSalle Street. Leasing is expected to begin in first quarter 2017.

Located in Chicago’s Gold Coast neighborhood, The Sinclair is steps from some of the city’s most famous shopping, dining and nightlife destinations, as well as nearby parks and the lakefront. The community is adjacent to the CTA’s Clark/Division Red Line station, and serviced by several CTA buses, offering convenient access to the Loop. A DIVVY bike station is also just a block from The Sinclair.

Chicago-based Solomon Cordwell Buenz has been retained as the building’s principal architect and interior designer. McHugh Construction will serve as the general contractor for the project.