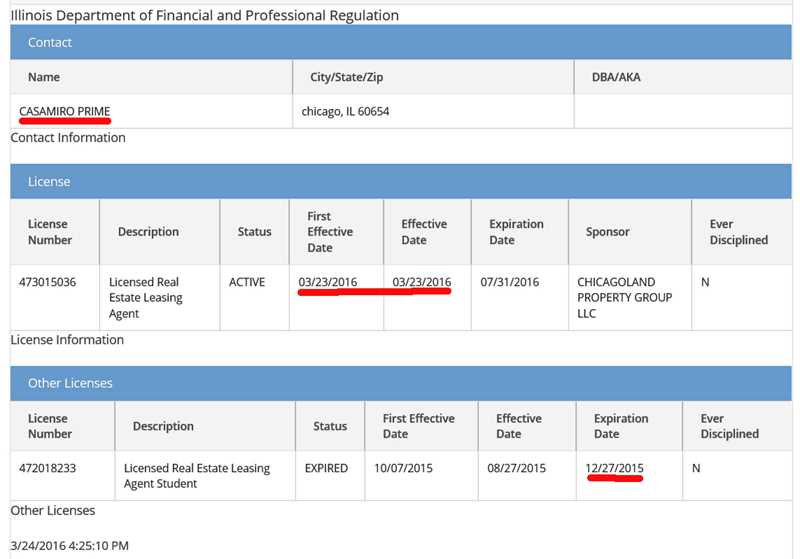 When we began our recent spate of posts on Chicagoland Property Group (“CPG”), back on March 11, twenty-two of the firm’s agents had just over 7,000 repetitively abusive apartment ads at Craigslist.

Just before we began this post, the same 22 agents had just over 3,300 ads at Craigslist. CPG’s leasing manager, scofflaw Jon Zolecki, reduced his spamming from 1,134 ads to 196.

Casamiro “Cas” Prime has a small dip in his ad volume, from 143 to 132. If the dates in the IDFPR License Lookup database (screen cap above) are accurate, Cas Prime was committing a Class A misdemeanor by holding himself out as a licensee on March 11. Cassi (Walker) Norman also advertised at a time when she was apparently unlicensed.

Mike Britton has more than doubled his Craigslist ads, from 140 to 364.

Many of CPG’s current ads are for properties that haven’t given CPG the written authority to advertise that the Illinois Real Estate License Act requires. Units are being advertised that aren’t available for rent or are available only at materially higher prices. You might call them bait-and-switch ads; I call them Zoleckis.

An apt unit of measure for CPG’s Craigslist ad volume is “a shitload.” No matter how you slice it, 3,300 ads is still a shitload – in quality as well as quantity. Far fewer but fresher ads can waste just as much time for renters as many more ads many of which are days older.