Demolition should have been starting point for Streeterville tower 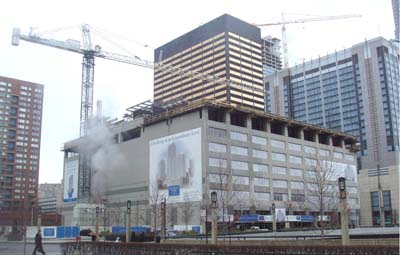 Is this the ugliest garage you’ve ever seen? Sadly, it probably isn’t, since an ugly garage base seems to have been a prerequisite for most residential high-rises developed in Chicago during the last decade. Centrum Properties, which is building The Fairbanks at Cityfront Plaza, might be let off the hook since the company inherited this monstrosity, which was as far as R.M. Chin & Associates failed Grand Pier project got. But we’re not inclined to give Centrum a pass.

Streeterville would be better off if developer 2 had demolished the monolith left behind by developer I. Maybe this doesn’t sound financially feasible (we can be fairly certain of Centrum’s opinion on the question), but that’s not our problem. If this was the best the company could do, it should have passed on the deal.

Architects DeStefano & Partners did as well as can be expected with this automotive albatross hanging around their neck, designing a 31-story steel frame structure with a narrow profile and a softly curving facade over the existing garage. But there’s no getting over that unsightly base (rendering below). 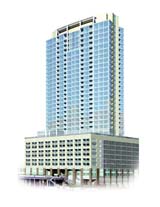 Compare this with another new development named for Fairbanks Court, Helmut Jahn’s 600 North Fairbanks. Not only is the parking seamlessly integrated into floors two through 12 in Jahn’s design, the building has a gently and dramatically tapered base. Mostly that seems a brilliant response to the site and the air rights developers secured, allowing the tower to lean audaciously over its neighbor. But the elegant narrowing of Jahn’s design at the bottom also has to be read as a response to the massively clunky garage bases of so many new high-rises. 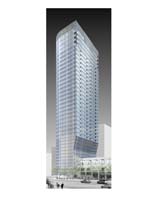 You can argue about whether or not he succeeded, but you also have to give Ralph Johnson, of Perkins & Will, credit for one of the more creative garages we’ve seen, at Contemporaine, a beautiful condo building in River North. Again, Johnson’s glass-walled garage, which allows passersby to watch cars ascending the ramps, is a response to the faux windows and silly decorative touches designed to disguise unwieldy garages in so many new high-rises. 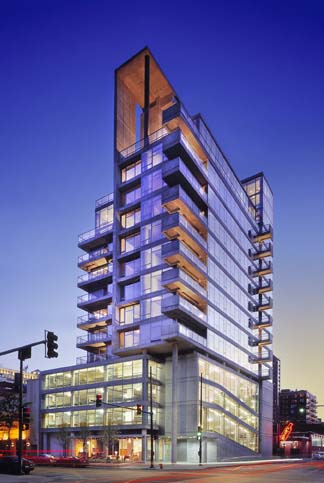 These projects prove that garages don’t have to spell the death of good design in residential towers. Parking can be artfully integrated into condo and apartment high-rises, and they can be functional without a total disregard for form.