Does a Yelper live in Lincoln Park and at EnV? 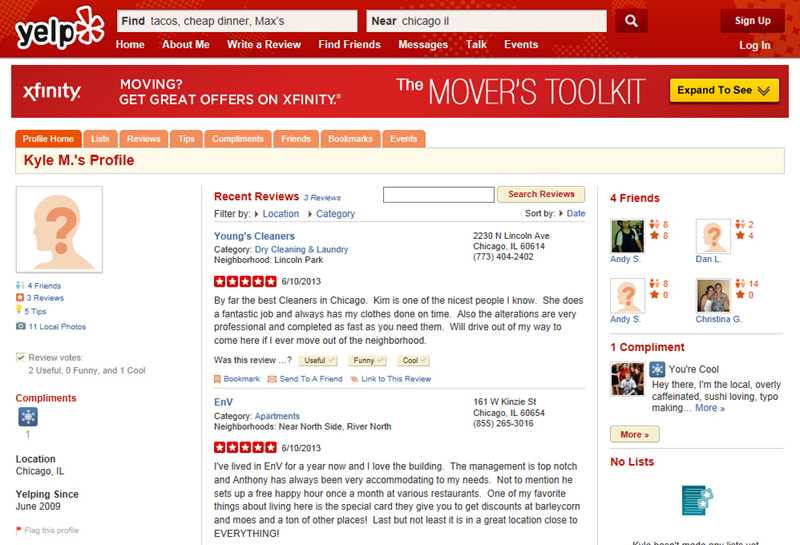 A year ago in April we wondered whether, based on its uniformly negative Yelp reviews, EnV was Chicago’s worst new apartment tower. We also expressed skepticism about the single, extremely positive review of the building at ApartmentRatings.

There have been no new reviews of EnV at ApartmentRatings, but EnV has since been both praised and slammed at Yelp, and a dozen of the reviews (both positive and negative) have been filtered by Yelp as suspicious.

A month ago Kyle M who has “lived in EnV for a year now” wrote about how much he loves the building. On the same day, as you can see above, Kyle M was praising a dry cleaner in Lincoln Park. He liked it so much he will “drive out of my way to come here if I ever move out of the neighborhood,” implying that he lives nearby rather than at EnV.

EnV’s management monitors the Yelp reviews and periodically posts feedback. Management responses have thanked Yelpers for 5-star reviews that seem hard to credit as having been written by actual EnV renters.

If you’re trying to determine whether Yelp reviews are fraudulent or real, look at the Yelper’s other reviews. You’ll often see patterns that indicate the reviews are fictitious, and rave reviews from a one-time Yelper are inherently suspect. Another warning sign: reviews that single out named individuals at buildings or at rental services for high praise. There’s a high probability that those reviews are fraudulent.

The managers of major apartment buildings like EnV have generally been extremely well trained about the legal environment they operate in. It would be unusual for a manager to be unaware of the state and federal laws relevant to soliciting false online reviews.

When you see a pattern of glowing online reviews that appear to be false, the appropriate response is to take a closer look at the integrity of the building’s management and any warning flags you see when touring the building.

Newer Post
Want to own half of Presidential Towers?
Older Post
A new sundeck caps the new amenities at Park Michigan Apartments