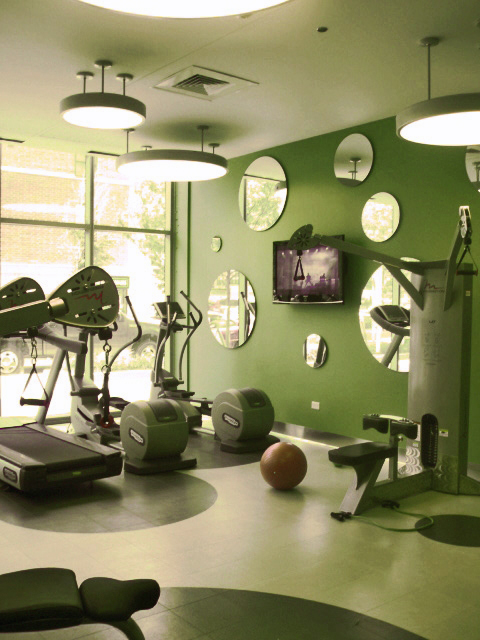 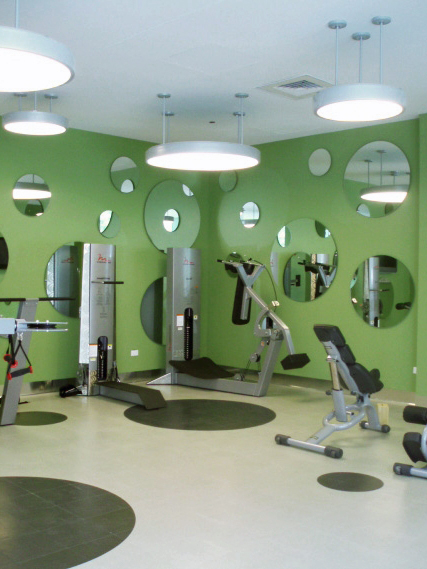 Senco Properties wasn’t fooling around when it named its West Loop project “Emerald.” It seems like everything at the twin towers but the condos themselves come plastered in varying shades of green: the Web site, the lounges, those strange blobs on the walls. Even the 1,500 square-foot fitness room wasn’t immune to John Robert Wiltgen‘s interior design schemes.

Exercise rooms aren’t the kinds of amenities we spend too much time profiling, but I can’t say we see too many exercise rooms that hold true to the rest of the building’s design (or that seem to bear any design at all).

Wiltgen’s rationale behind his design “was to be more creative than just mirrored walls,” Gerlach says. Judging by his of choice small, circular mirrors, this won’t be the kind of room where gym rats spend their time posing and preening. That’s probably not a bad thing for anyone who feels intimidated by Stairmasters or Nautilus machines.

The circular mirrors “repeat the shape of the suspended light fixtures found through out the lobby,” and the pattern is repeated on the vinyl flooring, Gerlach says.

Emerald, located at 123 S Green St (imagine that), comprises 212 units priced from the $280s to the $480s. Deliveries at the towers began this summer.

– Rate and review Emerald at NewHomeNotebook.com.