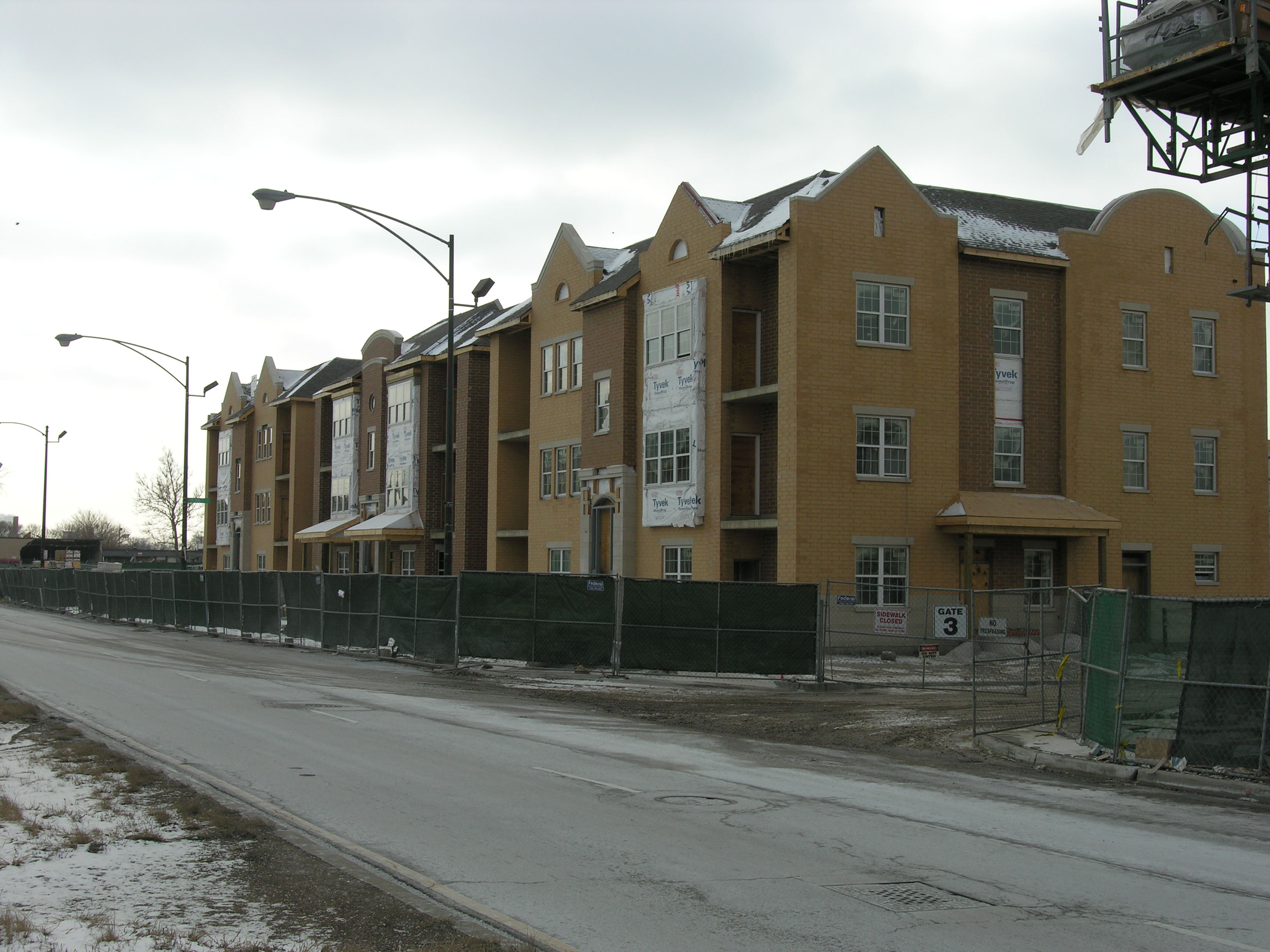 Park Boulevard, a 1,300-unit development in Chicago’s Bronzeville neighborhood, is moving along – currently, the 311-unit first phase is well underway, with low-rise buildings beginning to line State and 35th Streets. About 50 percent of the 211 units that are for sale in the first phase have sold, according to Norma Baskin, Park Boulevard’s sales manager.

The master plan, by Skidmore, Owings & Merrill, calls for 880 units to be built where the Stateway Gardens public housing complex once stood – a 36-acre site bounded by State, Federal, Pershing and 35th streets. The rest of the homes will be scattered throughout the surrounding neighborhood.

Park Boulevard is part of the Chicago Housing Authority‘s plan to overhaul the city’s public housing system. Instead of crowding low-income families into massive complexes, the new approach seeks to intersperse public housing units with affordable and market-rate homes.

In line with this plan, Park Boulevard’s developer, Stateway Associates, will lease about a third of the homes to former Stateway Gardens residents – including 100 units in the project’s first phase. The public housing units will be condos owned and managed by the developer and rented to qualifying CHA tenants.

Stateway Associates formed in 2000 when Mesa Development and The Walsh Group joined forces with The Davis Group, headed by affordable housing veteran Allison Davis, and Kimball Hill Homes, known for large-scale suburban developments. The group took a different approach than some other developers replacing public housing, relying less on federal subsidies and focusing instead on a market-driven approach, says James Miller, CEO of Stateway Associates.

About 30 percent of the for-sale units in the first phase are dedicated to affordable housing, reserved for families making no more than 120 percent of the Chicago metropolitan area’s mean income. For example, annual gross incomes may not exceed $72,350 for a couple and $90,500 for a family of four.

The affordable units include one- to three-bedroom condos that range in price from the $160s to the $260s, Baskins says. Finishes include carpeting, white kitchen appliances, laminate countertops and ceramic kitchen tile. Buyers of affordable units have the option to upgrade to finishes like hardwood floors and stainless steel appliances, she adds.

Market-rate buyers can choose from a range of housing types: one- to four-bedroom condos (simplexes and duplexes), two- to three-bedroom townhouses or four-bedroom single-family houses that line a rectangular green space. Prices range from the $190s to the $680s, and finishes include hardwood floors in living areas, stainless steel appliances, granite countertops and cultured marble vanities in the bathrooms. All units at Park Boulevard come with washer and dryer hook-ups.

Park Boulevard’s second phase of 400 units is slated to break ground in the third quarter of 2008, Miller says.