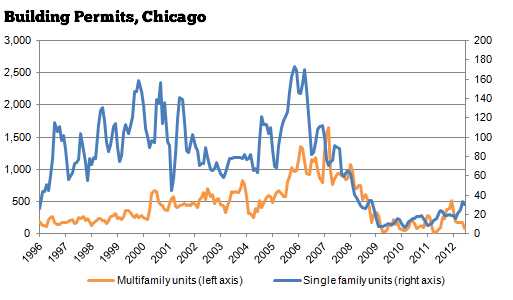 The level of housing starts in the U.S. (data not available at the city or county level) has increased noticeably over the past 12 months, but building permit data from Chicago show the city is not keeping up. Starts for the entire U.S., which are logged when a builder begins construction, have averaged 727,000 per month in the first half of 2012. This compares to an average of 612,000 last year.

In Chicago, building permits (which do not always result in construction) have not begun to increase in any meaningful way.

Single-family home permits have been increasing recently, but the numbers are small: they average just 31 per month this year. The bulk of new construction here is multifamily (apartments and condos), and the data here have been mixed. While multifamily permits averaged 571 per month in 2008, they averaged just 125 per month for the first half of this year. August 2008 was the last time 571 units were permitted in a single month. In only one month this year (March, 468) has permit activity exceeded 200.

More detail can be found at Lakeshore Analytics.