I'll take Manhattan – the South Loop loft development, that is 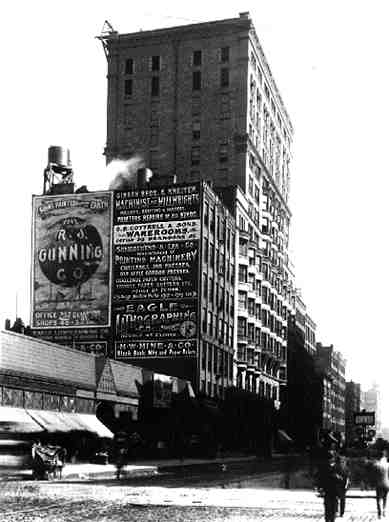 Everything is just bigger and better in Manhattan, isn’t it? Ripped from the musty archives of New Homes Magazine is this interesting piece of information about The Manhattan, 431 S Dearborn St, a former office building and city landmark that was converted to lofts in the 1990s.

“The Manhattan was built in 1891 as an office building and immediately earned a number of firsts: tallest building in the U.S., the first tall building to use steel skeleton construction throughout and the first building with a structurally sophisticated wind-bracing system. Visitors to the 1893 World’s Columbian exposition were awestruck by the building, which they dubbed ‘Hercules.'”
What’s it like inside? A little different from many loft developments because it’s a former office building, not an industrial space. Apparently it’s a soft-loft building with finished ceilings and shallow “railroad”-shaped floor plans that admit a lot of light. Second, third and fourth bedrooms are bigger than your typical master bedroom, apparently. The brick, terra cotta and limestone building also features bay windows.
And get this – when sales opened at The Manhattan around 1996 or 1997, studios were priced at $59,900. Four-bedrooms were priced up to $279,900.