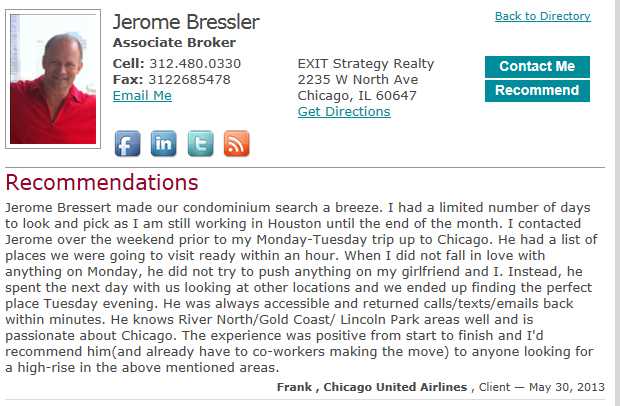 A year ago in October we questioned whether Jerome Bressert was Chicago’s sleaziest rental agent.

We didn’t receive any nominations for that award, but we did just receive a comment on our post wondering whether Bressert was doing business under the name of Jerome Bressler.

We checked Bressert’s website and his profile at Exit Strategy Realty (pictured above) and, sure enough, Jerome Bressert has become Jerome Bressler.

I placed a call to Nick Libert, the managing broker at Exit Strategy who informed me that he has a copy of a Cook County document verifying that Bressert has legally changed his name to Jerome Bressler. Libert indicated that the name change had been forwarded to the Illinois Department of Financial and Professional Regulation (IDFPR). The IDFPR license database does not yet reflect the name change and Libert stated he will follow up to ensure that it does.

Libert reports that he has spoken with clients of Bressert / Bressler, and that they have given him very positive reviews.

After speaking with Libert I checked the procedures for a name change in Cook County. Among other requirements: “must have no convictions or any felonies, otherwise you must wait 10 years to change your name.” We had previously reported on a guilty plea by Bressert in DuPage County to a Class A misdemeanor that apparently doesn’t bar a name change.

If you’re handing over the keys to your apartment to Jerome Bressler, or getting in a car with him to view apartments, you should ask yourself whether you’re comfortable dealing with Jerome Bressert. I wouldn’t be. In my opinion, a rogue by any other name doesn’t smell any sweeter.

Bressert’s name change is a first for a Chicago agent in my experience, except for changes incident to marriage. It led me to wonder whether this is his first name change.

On a separate note, Libert reports that he promptly terminated Bryan Duffy after Duffy’s most recent arrest.

Note: This post has been modified to delete an image of and a reference to a different Brian Duffy.