Is this a Zook house or merely a Zook roof? 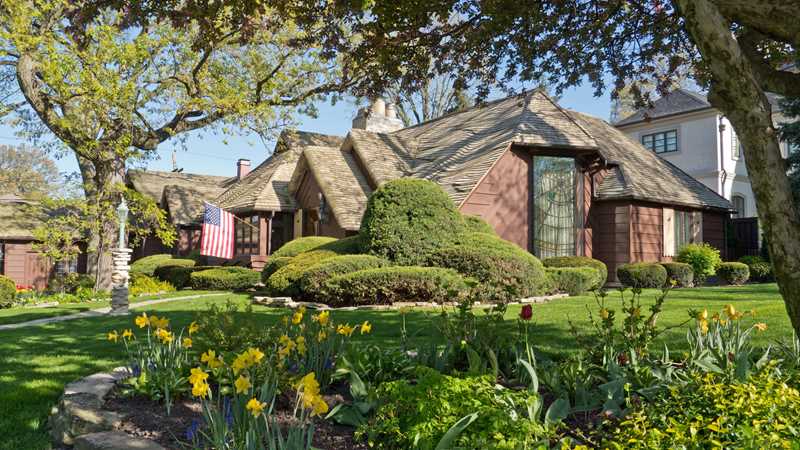 As I was leaving Western Springs yesterday I chanced upon the home at 811 Oak St that’s pictured above. I had to stop for a closer look.

A few minutes of Googling surfaced a blog post with the following information:

This house has a Zook Roof, named for prolific Chicago area architect R. Harold Zook, the man who came up with the concept of a shingle design resembling a thatched roof.
…
He died in 1949, which doesn’t make this a true “Zook Home,” Marathon Pundit reader Brian P, who lives next door to this home, told me the roof of this house was placed on top of the existing structure about ten years ago.

The Cook County Assessor’s site gives the home’s age as 76, which opens the possibility that this is, in fact, a Zook home. A 1985 Tribune article contains some telling clues to the home’s provenance:

If Zook was especially pleased with a house he had built, he would put a spiderweb design in it somewhere, his trademark. “It was the form, the delicacy of it, and it is a very intriguing structural shape,“ Taylor [Zook’s nephew] explains.

Often the spiderweb showed up in leaded-glass windows, as in the Katherine Legge Memorial Lodge, built in 1927 as a private residence, now part of Hinsdale Park. Sometimes the spiderweb went over the fireplace in a screen or into the bricks on the floor of a gazebo.

Though he is most identified with Cotswold-style cottages, he also created handsome Tudor style homes which have distinctive, artfully crafted slate roofs. Consistent in all of his work was his use of beautiful woods. He liked deeply recessed doors and he put scalloped wooden trim on exteriors as well as interiors.

The Zook Home & Studio is in Hinsdale, where you can see dozens of Zook homes.

Is this a Zook house?