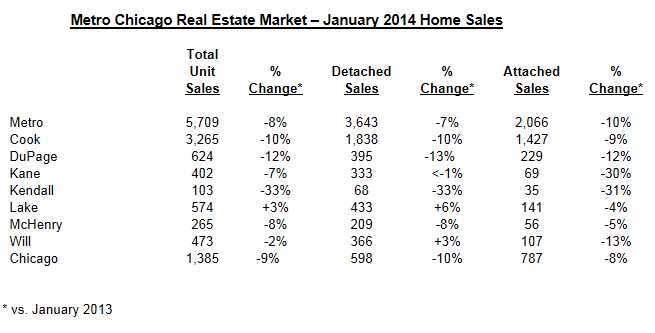 Compared to the results for January 2013, the median sales price of all attached and detached homes rose 18 percent last month to $165,000, while the number of homes changing hands dipped 8 percent to 5,709 units.

The average number of days those homes sold in January spent on the market before going under contract was 107, or 35 days less than a year earlier. Meanwhile, the inventory of homes listed for sale continued to tighten, falling to 28,774 at the end of January. That is down 1 percent from the prior month and 16 percent from January 2013. The RE/MAX analysis is based on home-sale data gathered by MRED LLC, the regional multiple listing service.

Sales of distressed properties, a category that includes foreclosures and short sales, accounted for 42 percent of January sales this year compared to 49 percent last year. Distressed sales tend to peak as a percentage of total sales during the winter months. Foreclosed properties alone accounted for 31 percent of all January home sales. The median sales price for a foreclosure was $87,000, 15 percent more than a year ago.

Transaction activity, on the other hand, fell in six of the metro counties and in Chicago. Lake County was the exception, with 574 completed sales yielding an increase of 3 percent when compared to January of last year.

Both of the trends that characterized the housing market in January were strongest in the attached home segment. The median sales price for attached homes in the metro area was $135,000, a 23 percent year-over-year increase, compared to 18 percent gains achieved by the total market. At the same time, the number of attached homes sold totaled 2,066 units, which represented a 10 percent decline from January of last year, 2 percent more than the overall market. Average market time was 100 days, down from 145 days in the prior January.

The county-by-county results for attached home sales, comparing January 2014 with January 2013, are as follows:

Sales of detached homes in the seven-county area during January totaled 3,643 units, 7 percent fewer than in the same month last year. The median sales price rose 16 percent to $181,500. Average market time fell to 110 days from 140 days a year earlier.

The county-by-county results for detached home sales, comparing January 2014 with the same month in 2013, are as follows: