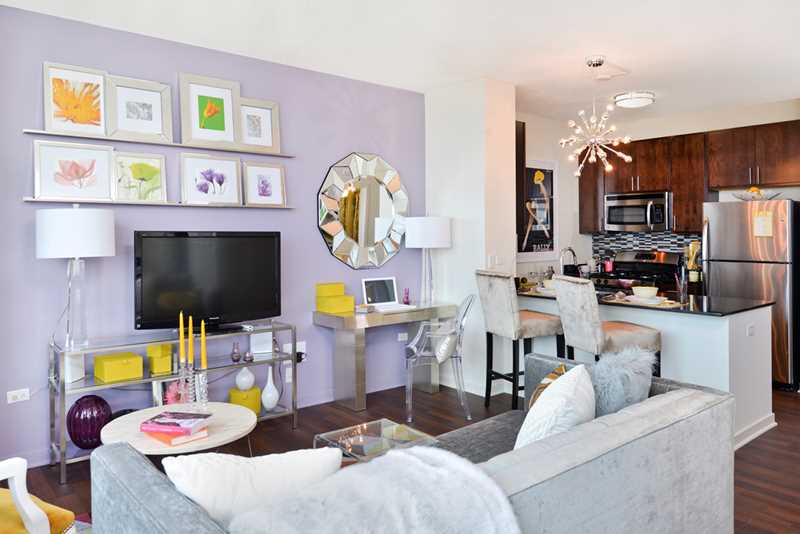 To celebrate the grand opening of K2, a new 496-unit luxury apartment tower in Chicago’s Fulton River District, Chicago-based Fifield Companies and one of the nation’s leading multifamily developers, Wood Partners, will host a first-of-its kind K2 Designer Showcase May 1 – 3.

Open to the public, the K2 Designer Showcase will feature seven models from Chicago designers Morgante Wilson Architects, Adrian Smith + Gordon Gill, Design for a Cure and Brook Furniture Rental. Each night from 6:30 p.m. to 9 p.m. guests will be able to tour all seven apartment models, which will range from a bachelor studio to a two-bedroom urban retreat.

“To celebrate K2 being the first downtown luxury apartment tower to open this year, we wanted to do something truly unique and this Designer Showcase seemed like an ideal opportunity,” said Randy Fifield, vice chair of Fifield Cos. “Just as K2 is on the cutting edge of apartment finishes and amenities, this Designer Showcase of ‘pop-up’ models is the first of its kind.

“And it’s not as if we’re just showcasing one model, but seven models from three renowned design teams, whose work has appeared everywhere from The Wall Street Journal to Chicago Luxe,” continued Fifield. “K2 is the perfect venue for these award-winning designers to express their vision for what luxury urban living can truly be.”

Three of the models will be permanent, while the four remaining models will be taken down immediately after the event. Common in the retail industry where pop-up stores appear for a limited time and are then taken down, the idea of pop-up models is new to the apartment market and has not been done in Chicago before, said Fifield.

“Attendees will not only be inspired by these examples of how to decorate their own homes, but this event will also help them to envision living the downtown lifestyle,” said Fifield. “Each model will be custom designed with a specific market segment in mind, such as a bachelor or married couple, to show the wide range of lifestyle possibilities at K2.”

Morgante Wilson Architects, an Evanston-based interior design firm that has received the American Institute of Architects (AIA) Chicago’s prestigious “Young Architect Award” and the AIA Special Recognition Award for Interiors, will design a two-bedroom model unit geared toward a couple with established careers.

Chicago-based Adrian Smith + Gordon Gill, an architecture firm responsible for such buildings as Trump Tower in Chicago and the Burj Khalifa in Dubai, will design three model units for the event, including a studio for a young, single man; a convertible for a single, working female; and a one-bedroom home for a young couple.

“This Designer Showcase is the perfect way to properly introduce K2 to the marketplace,” said Patrick Trask, central region director for Wood Partners. “We set out to deliver a product that would be unmatched in the luxury rental market and we think our guests will agree we accomplished this goal. K2 has redefined what luxury rentals can be in Chicago.

“So many people are choosing renting over buying today, and with the opportunity K2 provides, they can now choose to do it in elegance,” said Trask.

Fifield Cos. has also decided to donate a portion of all new leases generated by the event to charity. If attendees sign on at K2 within 90 days of the event, they will be given a choice of steering Fifield’s donation to either PAWS, Anne & Robert H. Lurie Children’s Hospital of Chicago, Today’s Chicago Woman Foundation, or Design for a Cure.

Attendees at the event will be able to tour K2’s numerous common area amenities, including multiple lounge and party areas; a state-of-the-art exercise facility complete with men’s and women’s locker rooms, steam rooms, showers and lockers; a basketball court / yoga studio; a theater room with a 120-inch projection television system; and a business center with six computer stations and a separate boardroom for residents’ business needs.

At the center of K2’s outdoor gathering area is a 70-foot lap pool with four full-sized swimming lanes. The pool deck will feature four cabanas, including two that can be completely enclosed for outdoor massages. The outdoor lounge area comes with a gas fire pit and direct access to both interior party rooms and lounge areas.

Art lovers also will enjoy K2 as it has on display a number of authentic Salvador Dali prints, a Lichtenstein and “Night Walk,” an 8’x13′ commissioned piece by Vidvuds Zviedris in the building’s lobby that was inspired by the building’s color palette and design.

Residences at K2 include studio, one-, two- and three-bedroom apartments. Interiors feature luxury finishes such as nine-foot ceilings, stainless steel appliances, granite counter tops, plank flooring and Grohe fixtures. Rents range from $1,650 for a studio to $6,500 for a three-bedroom, three-bath penthouse. 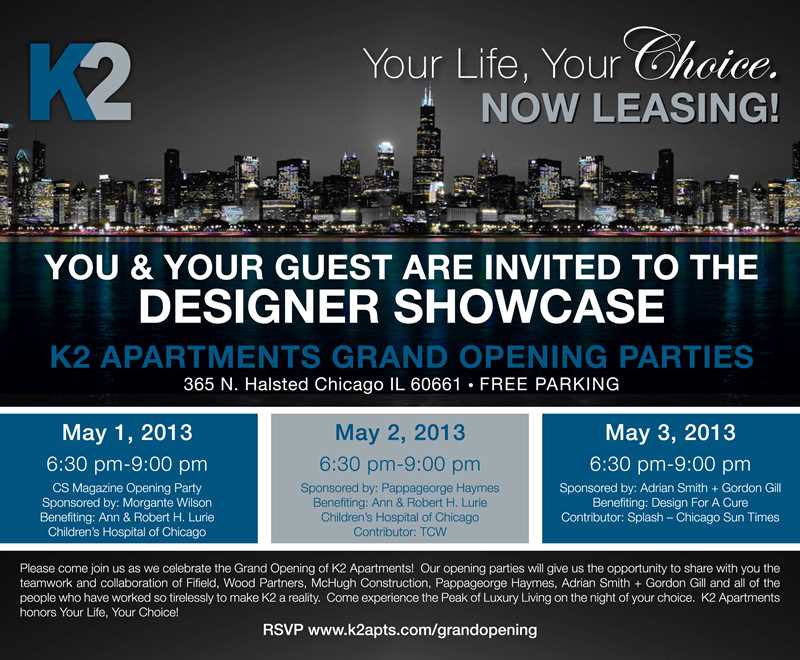 Leasing at K2 began March 1 and residents have already begun moving into the building. K2 Apartments is located at 365 N Halsted St. For more information on leasing at K2, visit the website or call 855-886-7774.